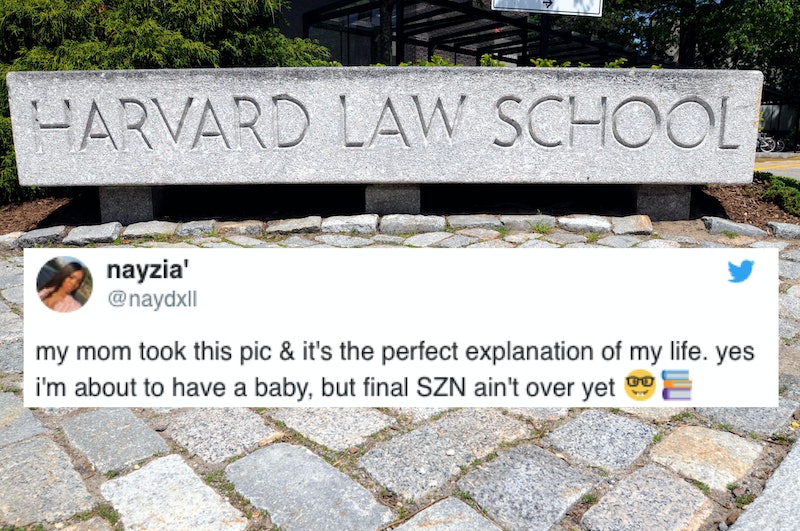 Taking final exams is no easy task. First, there's the prep, which requires you to hide the Apple TV from yourself and disable all your streaming sites/access to Twitter, while you attempt to shove some facts into your brain. Then, there's pre-exam ritual, which requires trying to go to bed at a reasonable time but certainly failing. And then, there's the stress of the test itself. It's enough to break anyone, but one woman managed to take a final while IN LABOR, and then graduate from Harvard Law. Heroes truly do walk among us.

The hero mom in question is one Briana Williams, a 24-year-old student at Harvard Law School. Last April, Williams was in the middle of her final exam period when she went into labor. "I immediately requested an epidural so that my contractions wouldn't interfere with my Family Law grade. And, with tears in my eyes, I finished it," Williams wrote in an Instagram post featuring her and her daughter as she accepted her law school diploma last week. She added, "This 'biting the bullet' experience is quite quintessential of my time at Harvard."

Considering I had to move seats during the SATs because I was annoyed by the air-conditioner blowing near me, it is beyond impressive that Williams was able to get through a final as her body prepared to PUSH A BABY OUT OF IT. Trying to focus while battling menstrual cramps is one thing — trying to take an exam that's worth the majority of your class grade while a tiny child attempts to claw its way out of you is, well, quite another.

Of course, not only did Williams manage to take (and pass) an exam while IN LABOR, she also managed to finish an entire year of law school while raising her infant daughter, Evelyn, by herself. "To say that my last year of law school, with a newborn, and as a single mom was a challenge would be an understatement," Williams wrote on Instagram. "Some days I was so mentally and emotionally fatigued that I did not leave my bed. I struggled with reliable childcare." Williams said she often ended up taking her daughter to her dean's office to see if someone could watch her, though when that didn't work out, she'd bring Evelyn to class. "Evie attended classes often," Williams wrote.

Williams said her last year of school was so difficult, she wasn't sure she'd be able to finish. "I did not think that, at 24 years old, as a single mom, I would be able to get through one of the most intellectually rigorous and challenging positions of my life. It was hard. It hurt. Instagram can make peoples’ lives seem seamless, but this journey has been heartwrenching," she wrote. But last week, she got her Juris Doctor degree, despite the odds. "At first, I was the anomaly of my [marginalized] community. Then, as a single mother, I became a statistic. Next, I pray that- for the sake of my baby, I will be an example," she wrote on Instagram.