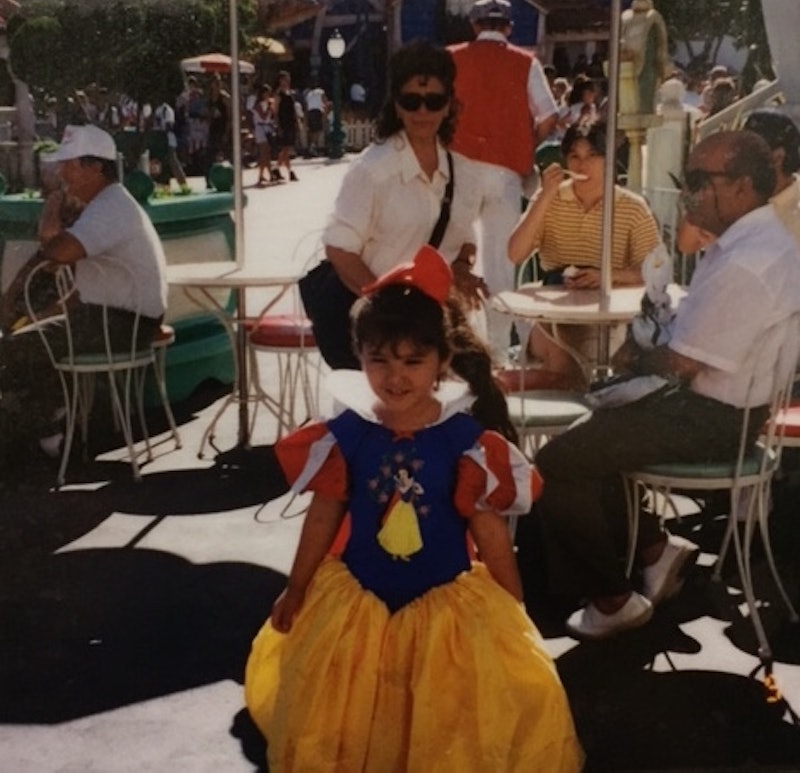 You're 18 years old. An adult in the eyes of your government — but, inside, you've never felt younger. You're handed a gun; it's cold, heavy. You didn't expect it to be this heavy — you didn't expect it to weigh you down so much. But here you are, 18, and you're holding this cold and heavy gun and hearing all about the Gulf War, and they're talking so fast and you never even wanted any of this, but your military service was mandatory the second you turned 18, and you can't even hear what they're saying — why can't you hear what they're saying? Is it important? You think about asking someone, but your voice doesn't work either. Instead, you think about your family. You think about your mother, and how she burned Esfand seeds and wafted them around you for days before you were forced to leave, in fear of "cheshm khordan," and in hopes they would deter "evil eyes" from you. You think about how she cried, and how you told her it would be OK even though you had no way of knowing if you were telling the truth. And now you're being sent out to the battlefield, and none of it feels real.

And me, the woman writing this — I'm not real either. In fact, I'm not here to write this at all.

Or, at least I probably I wouldn't be here if Donald J. Trump had been president of the United States in 1978, and had signed an executive order to keep citizens of seven Muslim-majority countries — including Iran — out of the country during that time. And that boy I described above? It could have been my uncle, who is now in his 40s and a naturalized American citizen after being welcomed by America with open arms when he was 13 at the height of the Iranian revolution.

The fact that the existence of my life and the survival of a family member I love very dearly clearly could so easily have been threatened if circumstances were slightly different three decades ago is a reality I've been forced to confront since Trump made the decision to move forward with his executive order, and quite honestly, I haven't yet figured out how to process it.

Had he not been allowed into the country to live with my mother, who had been attending university here at the time, he could very well be dead, because he would have been required to join the Iranian military — and in all likelihood, I would not exist, because my mother would not have been in the U.S. to meet my father or to raise my uncle and decide she wanted kids.

Today's reality, of course, differs greatly: The America that opened its arms and heart to people like my mother, who came to the U.S. when she was 19 years old to attend university in Missouri, and to my uncle, who came to the U.S. a few years later when he was 13 to live with my mother — the America that allowed them to both achieve the American dream, and resulted in my life — feels like it doesn't exist anymore. It's 2017, Trump is the president, and he signed an executive order to keep citizens of Iran, Iraq, Sudan, Syria, Yemen, Somalia, and Libya — even those holding valid U.S. visas and green cards — out of the country on Jan. 27, 2017. People have been detained at borders at every major U.S. airport, and many have been put on planes back to the Middle East.

The fact that the existence of my life and the survival of a family member I love very dearly clearly could so easily have been threatened if circumstances were slightly different three decades ago is a reality I've been forced to confront since Trump made the decision to move forward with his executive order, and quite honestly, I haven't yet figured out how to process it. That's not even the worst part, either — though that's a hard pill to swallow, what is more heartbreaking is the fact that the circumstances that could have been slightly different in the '70s are a reality for refugees and immigrants now; and the very thing I'm realizing could have easily affected or rendered my life nonexistent is happening to others now.

There are a lot of things that affect people's lives, and set them on their course. Being allowed into this country let my mother not only attend school here, but also to be here so that when my uncle needed to leave the country, he had a safe place to go, and a family member to live with. Additionally, raising my uncle even made my mother decide she wanted kids, leading to my existence. It's heartbreaking to think that there's something in existence now that could have changed all of that: Lives are being altered forever, and even blocked from existing.

My mother often tells me the story of how my uncle left Iran. She had been living in Los Angeles at the time, a recent graduate of an engineering program at a private university in Missouri. My uncle was still living with my grandparents in Iran, and the country was in the midst of a political and religious revolution that had torn it straight down the middle.

The decision to send my uncle to America to live with my mother wasn't an easy one — my grandmother, most of all, felt a deep sadness at the thought of sending her young son off to another country, and understandably so — but, given the dangerous political climate in the country at the time, it was the only decision that made sense. So, my grandmother got on a plane to Los Angeles with my uncle, and then she got back on that plane and my uncle didn't. The separation nearly killed my grandmother with grief, but it was for the best: Staying in Iran could have meant his death in the military, while in America, he had a chance at a normal life. At the time he would have been required to carry out military service, Iran was in the midst of the Iran-Iraq war; according to The Guardian, an estimated 1 million died in Iran during the eight years that war raged on — so it's quite possible (and deeply heartbreaking) that if he hadn't been allowed into the U.S., he'd be a statistic instead of my uncle.

My story is not unique. Take one look around you and I guarantee you will be able to find one, or more likely a few, people who will tell you that they are first generation Americans, or perhaps even an immigrant or refugee themselves.

Though he was undocumented, America, as it always has in the cases of those looking for a fresh start, embraced him. He graduated high school here, began three businesses here, is now the owner of a home in the suburbs complete with a picket fence here, and is even now a naturalized citizen of the country. He's engaged to be married now, too. He achieved the American dream, and only because we live in a country that has always made it possible for both its citizens and immigrants to do so. America is as much his as it is mine, someone who was born here.

My mother's experience was slightly similar. She arrived on a student visa in 1978, just a year before the Iranian revolution tore through the country. She graduated university here, married here, and had a kid here — me. These are the people that Trump's executive order is banning: people like my parents, my uncle, and my family still living in Iran. It's not ISIS, not terrorists, not the "bad guys" — it's mothers, fathers, and children escaping war, who are all looking for a piece of the American dream.

My story is not unique. Take one look around you and I guarantee you will be able to find one, or more likely a few, people who will tell you that they are first generation Americans, or perhaps even an immigrant or refugee themselves. The country was literally founded by immigrants for the purpose of welcoming all, governing fairly, and offering freedom and justice.

To those who support the ban, I ask: What makes you feel you are more deserving of the American dream than others that you feel innocent people, no matter their intentions, should be shut out of a country that is supposed to be beacon of hope and freedom around the world? If it is simply because you were born here, make no mistake: That entitles you to nothing. You were afforded a privilege that made your start in the world easier than someone who had to seek it out; that's all.

To those of you affected by the ban: I stand with you, and I know firsthand how difficult it is to reconcile that you live in a country where a good chunk of people don't want you there. However, I ask you to take comfort in this: As evidenced by protests and pushback by citizens across the country, the majority of Americans do not feel the way Trump and his administration clearly do. Those people are out there, yes, and their threat to ours and our families' livelihood is real, but they do not dominate this country.

Continue to be louder than them, and continue to fight back through organized, peaceful protests, regular calls to representatives, and donations to charities and organizations that assist refugees and their families. The American dream belongs to us all, and it always has. My family, your family, and the family of every immigrant is solid proof.