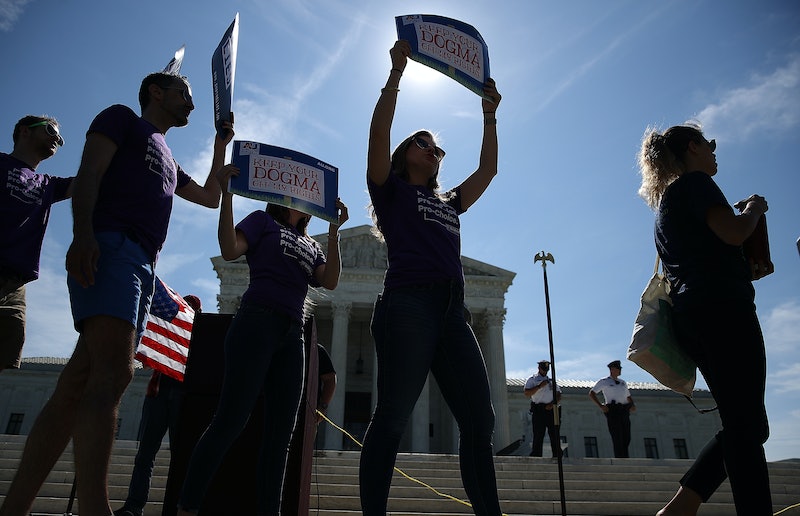 Since the beginning of 2019, at least seven states in America have passed restrictions on abortion access. In fact, some conservative lawmakers have openly said that their ultimate goal is to overturn Roe v. Wade, the landmark Supreme Court decision that declared women had a constitutional right to abortion. In an effort to push against these various anti-abortion bills, The Women's Health Protection Act was reintroduced in Congress on Thursday.

Since 2013, the bill has been reintroduced in every congressional session. The idea is to ensure that everyone in America has access to legal and safe reproductive health care — regardless of the state they reside in. According to its official text, the legislation supports "federal protections against state restrictions that fail to protect women’s health and intrude upon personal decision-making. It promotes and protects a woman’s individual constitutional rights, no matter where she lives."

If the Women's Health Protection Act becomes law, the official text for the bill says it would "prohibit laws that impose burdensome requirements on access to reproductive health services." This would include "requiring doctors to perform tests and procedures that doctors have deemed unnecessary or preventing doctors from prescribing and dispensing medication as is medically appropriate."

According to The Intercept, California Rep. Judy Chu and Connecticut Sen. Richard Blumenthal reintroduced the bill while imploring people to get involved. "We need to command the urgency and immediacy that all of our lives are at risk," Blumenthal said at a press conference on Thursday, per HuffPost.

If the bill successfully passes, the Women's Health Protection Act would take aim at the limitations individual states place on accessing abortion resources. Barriers like that include mandatory counseling for a person seeking an abortion and waiting periods.

According to the reproductive health care research center, Guttmacher Institute, such mandatory counseling is carried out in at least 18 states in America. Additionally, the institute showed that 27 states mandate a person seeking abortion to wait extended amounts of time before the medical procedure is performed. Depending on the state, the waiting period can range from 24 to 72 hours, according to Planned Parenthood's research.

According to a 2016 study published in the Perspectives on Sexual and Reproductive Health, such lengthy waiting periods can be a source of acute emotional and financial stress for people seeking abortion.

The senior vice president for the Center for Reproductive Rights, Lourdes Rivera, said in an official statement that the higher goal of the bill is to protect Roe v. Wade, HuffPost noted. The landmark decision, according to Rivera, "has not been equally realized across the U.S. because of the layer upon layer of restrictions that have been introduced by state houses across the country." The legislation reintroduced on Thursday would "address this inequality of access," Rivera added.

In other words, the Women's Health Protection Act would ensure that people — no matter what zip code they live in — should have complete control over their bodies.

More like this
Iran Has Issued A Death Sentence Over Mahsa Amini Protests
By Catharina Cheung, Darshita Goyal and Maxine Harrison
The 9 Best Women's 3-In-1 Jackets, According To Reviewers
By Andrea Hannah and BDG Commerce
Amanda Gorman Shared A Powerful Message On Meghan Markle’s Penultimate Podcast
By Darshita Goyal
Claire Foy & Rooney Mara Revisit A Devastating Tale In 'Women Talking'
By Bustle UK
Get Even More From Bustle — Sign Up For The Newsletter