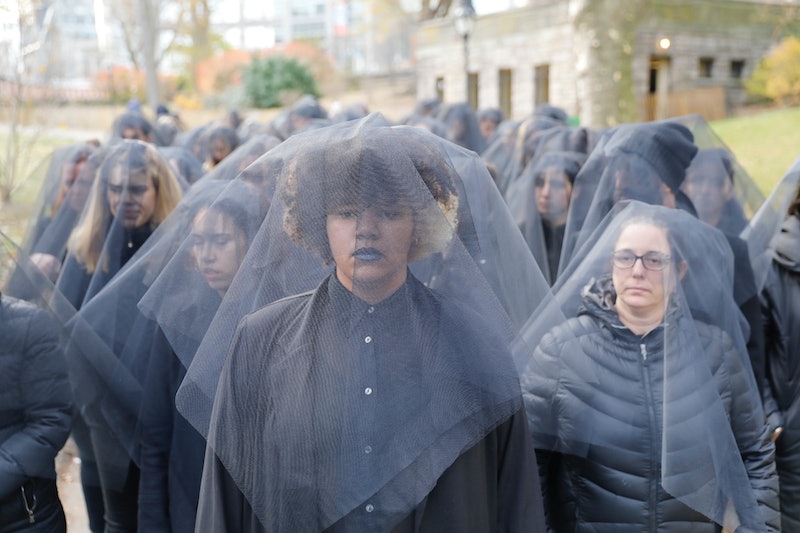 On a chilly Saturday noon in New York City, dozens of activists gathered in Columbus Circle to protest the Trump administration's controversial track record on immigration. A collaboration between Women's March and United We Dream activists, the protest demanded Congress pass the DREAM Act in favor of young immigrants throughout the country. Although undocumented immigrants have spoken at different rallies held by the Women's March in January, this seems to be the first time both United We Dream and Women's March have so strongly united to speak out.

Let's not separate [women's rights and immigrant rights]. Let's actually combine them and say, "Look. This is what we need."

The Women's March dubbed Saturday's performance demonstration "Dream Killers" to convey the fact that congressmen could crush the dreams of thousands of young immigrants if they don't pass a new Dream Act. In a conversation with Bustle, artist, filmmaker, national organizer, and artistic director for the Women's March, Paola Mendoza, explains what it means to use art as activism to shed light on Trump's presidency, the traumatic effects of deportation, and the meaning behind joining hands with the nonpartisan and pro-immigrant network United We Dream.

"Bringing together United We Dream and the Women's March was just a natural collaboration," Mendoza says. "We know that immigrant rights and the concept of the DREAM Act is a women's [rights] issue. The majority of undocumented immigrants in this country are women and young children. So, that is exactly what an intersectional movement looks like when you see that a women's [rights] issue is immigrant rights and being undocumented is a women's rights issue."

Women's March shared the video clip of the performance art protest on Twitter. Shrouded in black gossamer netting, young activists can be seen marching into Columbus Circle as a somber ballad is read aloud in the background. People from both Women's March and United We Dream danced to express what it feels like to be undocumented, young, and terrified.

Our newspapers still refer to undocumented immigrants as "illegal" and that in and of itself is the dehumanization of a person.

Mendoza describes the idea behind the collaboration with United We Dream, explaining, "Let's not separate [women's rights and immigrant rights]. Let's actually combine them and say, 'Look. This is what we need. We need women fighting for undocumented [youth], we need women fighting for a clean DREAM act right now.' We know that women are the forefront of the resistance [movement]. Women are leading massive cultural change." In fact, just days prior, both organizations emailed a joint statement to members, criticizing Trump's September decision to terminate the Deferred Action for Childhood Arrivals, or DACA, a program that protects almost 800,000 undocumented youths from being deported.

We have three more years [of Trump] and so, folks are wanting something beyond just marches and rallies.

The artist feels a responsibility to help people understand the struggles immigrants face by changing the nature of the conversation. "Our newspaper headlines were sensational when it came to immigrants," she says. "Our newspapers still refer to undocumented immigrants as 'illegal' and that in and of itself is the dehumanization of a person. No person is illegal. Undocumented? Yes. But no one is 'illegal.'"

Mendoza says people can "tap into the human heart" and perhaps even change hard-line and obstinate political and social narratives by delivering messages through art that is humanizing — "I want to point my camera toward those stories and uplift [them]," she says. The artist says that similar protests based on performance art will take place in the future and hopefully, positively sculpt the way American society thinks about immigrants.

I feel what's lacking right now in the resistance against Trump is ... large-scale organizing of artists with regards to performance art. ... The fight we have is going to be long. We have three more years [of Trump] and so, folks are wanting something beyond just marches and rallies.

Art as activism, the organizer believes, is exactly what can help move America forward.