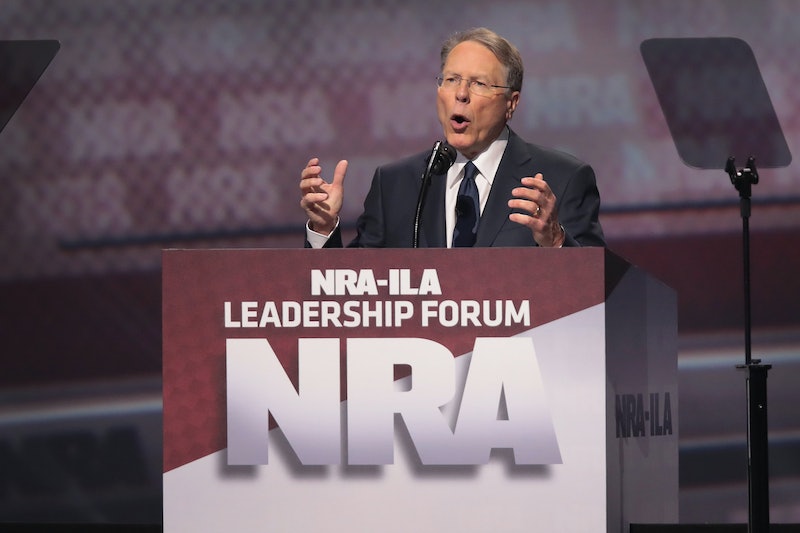 On Wednesday, organizers from the Women's March sent an open letter to NRA CEO Wayne LaPierre to address the gun advocacy group's supposedly fraught relationship with marginalized communities. Drawing on both the limited reaction to the police-involved shooting of Philando Castile, a black gun-owner, and video ads that demonize progressive protesters, the letter addressed what Tamika D. Mallory, Co-President of Women's March Inc., found to be failures on the part of the self-proclaimed "civil rights group" (Bustle has reached out to the NRA for comment).

The letter claimed that the NRA's recent actions and inactions reportedly show "a complete disregard for the lives of black and brown people" and suggested that they are supposedly "a direct endorsement of violence against these citizens exercising their constitutional right to protest." Ultimately, Mallory called on the group to take three immediate actions:

The NRA did initially respond to Castile's death on July 8, 2016, emphasizing that it believed it was important "not to comment while the investigation is ongoing." It also stressed that it "proudly support[ed] the right of law-abiding Americans to carry firearms for defense of themselves and others regardless of race, religion, or sexual orientation" and that it would have more comments "once all the facts are known."

However, according to Mallory, the revelation of more facts on the case didn't yield any kind of meaningful statement about Castile's rights as a black gun-owner:

Friday, June 30, will mark two weeks since Officer Yanez was acquitted for shooting and killing Philando Castile in Minnesota. In that time, the NRA has failed to make any statement defending the civil rights of Mr. Castile, a law-abiding gun owner who can be heard in video footage clearly notifying the officer that he was carrying a licensed firearm.

Yanez had shot and killed Castile after pulling him over at a traffic stop. According to a recording of the incident, Castile had let Yanez know he had a firearm on him. Though Castile clarified that he wasn't reaching for the gun before being shot and killed, Yanez testified he "thought [he] was going to die."

Meanwhile, the NRA-produced advertisement video, according to Mallory, "unashamedly peddle[d] an 'us versus them' narrative that pitted the NRA's demographic of gun-owners against grassroots activists involved with the Women's March, the anti-police brutality movement, and Black Lives Matter":

At a time when our nation is seeing a rise in racially charged incidents and violence motivated by hate speech, it is unconscionable for a powerful organization like yours to unashamedly peddle an 'us versus them' narrative. You are calling for our grassroots, nonviolent resistance movement to be met with violence.

Mallory's statement on behalf of the Women's March organization (while also highlighting her own experiences as a black woman "directly impacted by gun violence") promised LaPierre that the Women's March would "not be intimidated into silence." Ultimately, with promises to mobilize, she stressed the importance of protecting the first amendment as fiercely as the NRA protects the second.

More like this
How The City Healed Five Years On From The Manchester Arena Attack
By Ella Glover
The Church Of Scotland Votes To Allow Same-Sex Marriages
By Sam Ramsden
The 'It's A Sin' Creator Revealed A Massive Detail That Didn't Make The Final Cut
By El Hunt
Plan C Vs. Plan B: What's The Difference?
By Lexi Inks
Get Even More From Bustle — Sign Up For The Newsletter