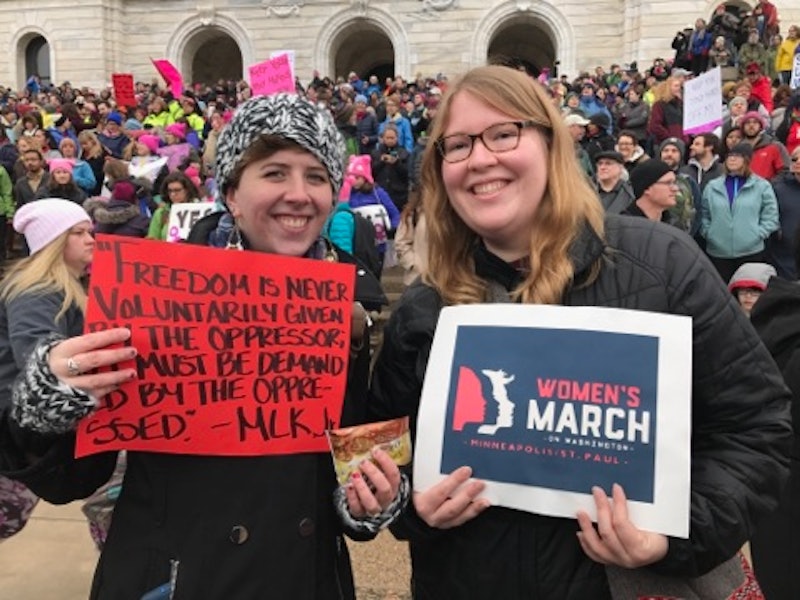 It didn’t occur to me in the moment. I was on the steps of the Capitol in St. Paul. My toes were cold, and my back hurt from carrying a bag full of snacks. I had donned a “My Vagina is Tough and Dangerous” shirt, and because it’s Minnesota in January, a “We the People” shirt over that. There were clouds and it was windy.

My fingerless gloves were doing nothing to protect my fingers, which clutched a sign with a Martin Luther King Jr. quotation on it. But I was whooping, and the girl next to me was trilling. Ilhan Omar took the stage to proclaim without a hint of fear that she is a black Muslim woman who chooses to wear the hijab. Then I was cheering for Patricia Torres Ray, celebrating her spot in history as the first Latina woman to serve in the Minnesota Senate. Singing, speeches, chanting. It blended together to become an experience I could only absorb as a live atmosphere of solidarity and strength.

Only afterwards did I think about the fact that I was surrounded by survivors. As many as 100,000 of us, far exceeding the 20,000-30,000 projected, gathered to declare that we would keep on surviving, because we will not just disappear off the face of the Earth.

I don’t know at what point I became a feminist. Sometimes I say it was the moment I realized that the 14-year-old boy who assaulted me was also a child.

We were there together with signs declaring that our rights and pussies are not up for grabs. Proudly drawn uteruses, pink and insistent in their magnitude, matched a sea of pink hats.

I don’t know at what point I became a feminist. Sometimes I say it was the moment I realized that the 14-year-old boy who assaulted me was also a child. He did a horrible thing, and I live with that horrible thing. But there was something in the realization that he didn’t know it was horrible. He was a symptom, and I could fight the symptoms all I wanted, but the disease would keep churning them out. My parents taught me efficiency. I went for the cause.

But then, I think, it must have been when I was 17, and I saw the havoc abusive relationships can wreak even on adults. Or maybe it was when I was 15, when I was in an emotionally abusive relationship myself. Or maybe it was when I was 12, when I stomped around with my friends, calling ourselves the CPGs (crazy psycho girls) and writing fantasy stories with female protagonists. Or maybe it was when I was nine, when a boy who liked me relentlessly harassed me, causing multiple trips to the principal’s office and an explanation to my mother that, yes, I knew what the words “F*ck you” meant. It could have even been when I was learning to read, and my favorite book was Noisy Nora, a story about an attention-starved mouse who breaks things and makes noise, all in a futile effort to get her family to notice her. It’s ultimately her silence that causes her family to take note. What lesson was that supposed to teach me?

I'm not sure exactly when I became a feminist. What I do know is that I am awed and humbled by what I experienced on Saturday. The Women’s March reminded me I am not alone in my suffering or in my fight. As I mourned for our shared struggles, I couldn’t help but celebrate the palpable energy of a crowd ready to Stand Up, Fight Back, to declare that Women’s Rights are Human Rights.

I had friends in almost every major metropolitan area marching and rallying, in all types of conditions, to stand up for one another. I am proud of myself for being there, and for knowing that years from now, I can say I exercised my right to protest to demand my right to exist without qualifications. For all the debates about what mass marches accomplish, these are the things the Women’s March gave me. Millions of women around the world came together to declare that no matter your stardom we will not “let you do it.” Because that isn’t civil, and it sure as sh*t isn’t liberty.