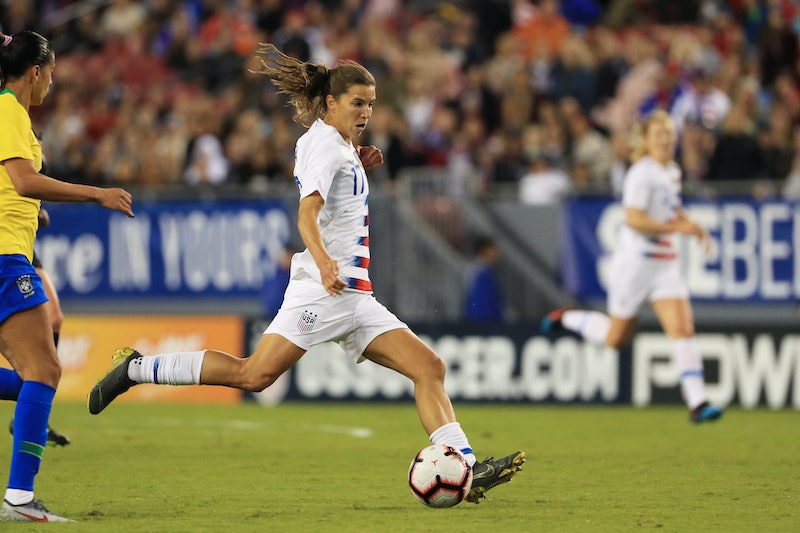 Some of the world's most famous female soccer stars made a big statement on International Women's Day on Friday. Just months before the Women's World Cup, players on the Women's National Team sued U.S. Soccer over the pay gap between their team and the Men's National Team.

All 28 players on the women's team have signed on to the lawsuit, which was filed in the U.S. District Court in Los Angeles on Friday and accuses the U.S. Soccer Federation (USSF) of "institutionalized gender discrimination." According to The New York Times, the women are trying to make it a class-action suit and win back pay for anyone who has been a member of the team since early 2015.

That's the year of the last Women's World Cup. The U.S. women's team emerged victorious then, and many across the country were outraged when their 2015 salaries were lower than the men's team, which had had a disappointing performance year. Even after some reforms were implemented, the pay gap between the teams remains stark enough that male players would still make more than women even if they were to have their worst season while the women were world champions, according to Slate. The next Women's World Cup is slated to take place in just a few months.

"Despite the fact that these female and male players are called upon to perform the same job responsibilities on their teams and participate in international competitions for their single common employer, the USSF, the female players have been consistently paid less money than their male counterparts," the lawsuit reads, per ESPN. "This is true even though their performance has been superior to that of the male players — with the female players, in contrast to male players, becoming world champions." Bustle has reached out to the U.S. Soccer Federation for comment.

This isn't the first time that the women's team has taken legal action to fight for equal salaries. Five players filed a wage-discrimination complaint with the Equal Employment Opportunity Commission (EEOC) in 2016, but that filing hasn't gotten much traction. "One player told me they were basically tired of waiting," Andrew Das, the New York Times journalist who first reported on the new lawsuit, tweeted on Friday.

The team went to the EEOC last month to pursue a new method. The commission gave players a right-to-sue letter, enabling them to sue in a federal court and ending the old complaint.

Alex Morgan, who is currently a forward on the team, was one of the players involved in that 2016 action. "Every single day we sacrifice just as much as the men. We work just as much," she said at the time, per The Orlando Sentinel.

In a statement on the new lawsuit, Morgan told ESPN on Friday that "each of us is extremely proud to wear the United States jersey, and we also take seriously the responsibility that comes with that." She added: "We believe that fighting for gender equality in sports is a part of that responsibility."

More like this
Talking About Mental Health In Sport Is Crucial, Says England Legend Karen Carney
By Sam Ramsden
Are John Legend & Kanye West Still Friends? The Singer’s Latest Update Is Candid
By Brad Witter
Christina Aguilera Took A Powerful Stand At Brighton Pride
By Sam Ramsden
'Scream’s Courteney Cox Has Broken A Major Horror Record
By Sophie McEvoy
Get Even More From Bustle — Sign Up For The Newsletter