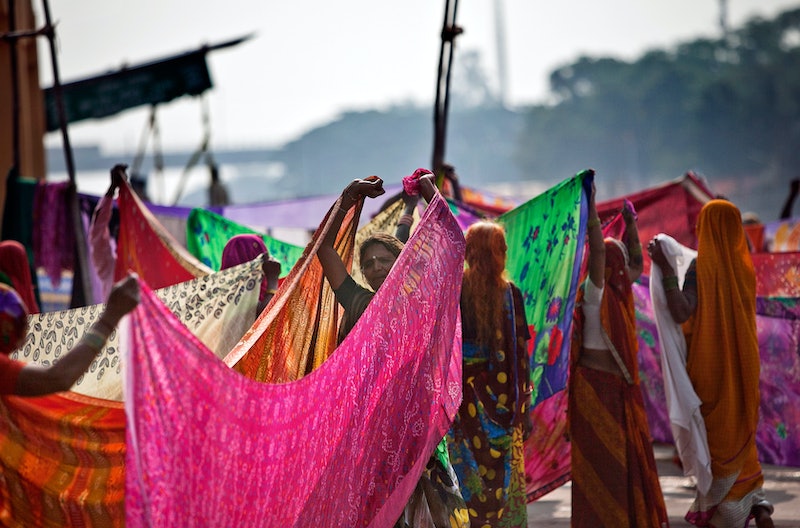 The first two women to ever enter the Sabarimala Temple, located in the Indian state of Kerala, were met with an outstanding amount of support from their peers on Tuesday, CNN reports. Forming what has been dubbed a "women's wall," millions of women in India stood side-by-side, in a line estimated to have been 385 miles long.

"There were so many women, and there wasn't even space for women to extend arms," Subhashini Ali, a member of the Indian Communist Party, which heads the state, told CNN. "If they had extended their arms, the length of the wall would have increased so much that women would be falling in the Arabian Sea."

The ban preventing women from entering the temple has been in place for centuries, CNN reports. The temple is believed to be home to a Hindu god of growth named Lord Ayyappa. Women of menstruating age have been banned from entering the the Sabarimala Temple under the supposition that, because the lord is celibate, it would be disrespectful to allow women who are "impure" inside of it.

The ban was overturned by India's Supreme Court in September of 2018. "Religion cannot be a cover to deny women the right to worship ... to treat women as children of lesser God is to blink at constitutional morality," Justice D.Y. Chandrachud said at the time, according to Al Jazeera.

"This is a massive victory for the women of India," she said. "These two women have protected India's constitutional rights and smashed the walls of patriarchy. But this is only the first step, we need to guard our rights in the family, in the home, in the workplace."

Protests have been a consistent issue in Kerala since the Supreme Court's ruling, according to CNN. Right wing opponents to the ban's lift have repeatedly gathered to prevent women from entering the temple — so much so that police reportedly deployed over one thousand officers to protect women seeking to enter it.

After the women successfully entered the temple, it was reportedly closed for one hour so that priests could purify it. And opponents to allowing women to visit Sabarimala say that they will continue to appeal the Supreme Court's decision.

"We are upholding the top court orders and our government here will continue to strongly back all women," Kerala social justice minister K.K. Shailaja told Al Jazeera. "We stand for gender equality. Those saying that women are impure should be ashamed of themselves. How can they say women are impure in front of God?"

After the two women visited the temple, protests erupted around the state, according to The Times of India, blocking several highways and forcing some businesses to close. Several journalists were also reportedly attacked.

India's Supreme Court is scheduled to review the appeal to their September decision later in January, but proponents of lifting the ban are just as stalwart in their beliefs.

"There is no logical reason," Shailaja told Al Jazeera, "to stop women from entering any temple."