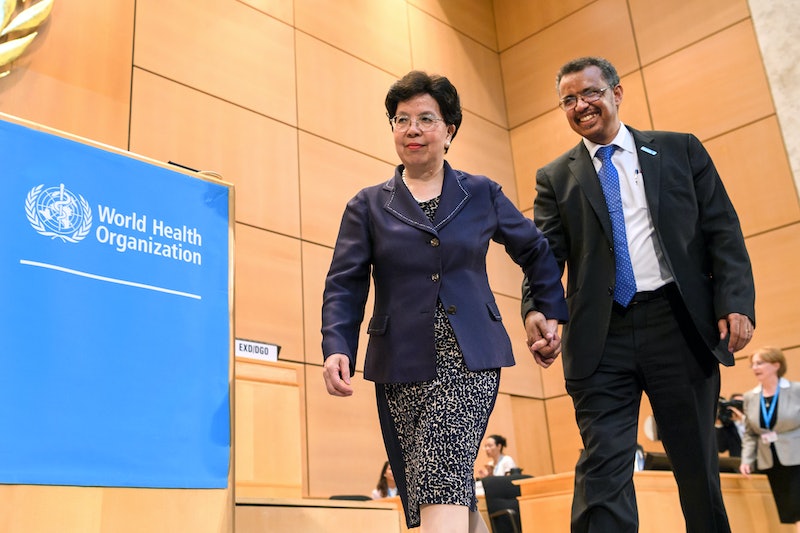 After Donald Trump surprised everyone by beating Hillary Clinton in the 2016 presidential election, you could be forgiven for being worried that the push for women in leadership roles had stalled. But there is of course a massive world out there outside of the United States, and much of it is continuing to push women's equality even as the United States seems to de-prioritize it for the time being. On Tuesday, the World Health Organization announced a leadership team that is 60 percent women.

The WHO is a part of the United Nations, which has helped to coordinate global health policy since its founding in 1948. At the beginning of July, its new director-general, former Ethiopian Minister of Health and Minister of Foreign Affairs Tedros Ghebreyesus, began his 5-year term. On October 3, he announced the 14 members of the team that would serve under him and coordinate health policy worldwide. Of the 14 positions, 9 are filled by women.

“The team represents 14 countries, including all WHO regions, and is more than 60% women, reflecting my deep-held belief that we need top talent, gender equity and a geographically diverse set of perspectives to fulfil our mission to keep the world safe,” Dr. Tedros said in a statement put out by the WHO.

The women set to lead the WHO are:

Women in leadership roles is not just a symbolic exercise. Numerous studies have shown that more women in leadership roles often lead to public policy that focuses more on women. With women's health being an essential party of the WHO's mandate and issues like access to reproductive health care and abortion, as well as domestic violence and sexual assault remaining issues that affect health outcomes worldwide, having women leading the coordinated response can help female health needs stay centered. It's been 169 years since Elizabeth Blackwell became the first woman to graduate from a medical school, but now we have women ready to take the lead on health care for the whole world.

More like this
How To Follow The New Royal Family Social Media Accounts
By Sam Ramsden
Archie & Lilibet Are Eligible For Royal Titles — But There's A Catch
By Jake Viswanath
Prince Harry Explains Why He Feels Guilty For Meghan's Estrangement With Her Dad
By Jake Viswanath
Is Queen Elizabeth II Or The Royal Family In Netflix’s 'Harry & Meghan' Docuseries?
By Jake Viswanath
Get Even More From Bustle — Sign Up For The Newsletter