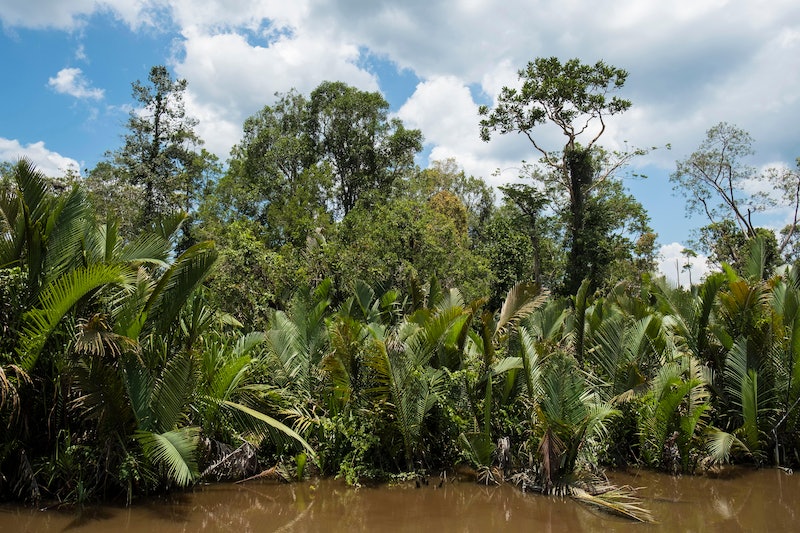 Give yourself a thumbs up, and then take a good, long look at your thumb. Now imagine your thumb is actually a bee. I don’t mean a little bee is sitting on your thumb; I’m talking your whole honking thumb has turned into a bee. That’s roughly about the size of the world’s biggest bee, and scientists have finally found the not-so-little critter after it disappeared 38 years ago, TIME reports. Scientists and bee lovers alike thought the giant bee had gone extinct, says TIME, but was recently spotted again in Indonesia.

This big bee is affectionally known as Wallace’s giant bee or Megachile pluto, but natural history and conservation photographer Clay Bolt dubbed it the “flying bulldog,” TIME reports. The giant bee’s wingspan is typically about 2.5 inches, and its body is the size of a human thumb, according to The New York Times. It’s named after Alfred Russel Wallace, an English entomologist who worked with Charles Darwin to develop the theory of evolution, says The New York Times. Wallace described the female bee as “a large, black wasp-like insect with immense jaws like a stage beetle,” though the male bee is less than an inch long, according to The New York Times.

The giant bee lives on a group of Indonesian Islands known as the North Moluccas, and the last time it was spotted was in 1981 when American entomologist Adam Messer found it, again on three Indonesian Islands, The Guardian reports. Even though the bee is so darn big, The New York Times says the bee’s rarity, remote location, and its nesting habits has made it super difficult to find. What experts do know is that the giant bee makes its home by digging holes in the nests of tree-dwelling termites, where it likes to hide, The New York Times reports. “I personally know of at least five attempts to find the bee,” Bolt, who was part of the latest expedition, told The New York Times.

This latest expedition to find the reclusive bee was partially funded by the Global Wildlife Conservation, a nonprofit group that hunts for lost species, says The New York Times, and it took five days for the team to track the bee down. “It was a lot of walking around the forest in 90-degree heat and the highest possible humidity looking at termite nests and chasing after bees,” Simon Robinson, a biologist at the University of Sydney in Australia and a member of the expedition, told The New York Times.

After days of searching, the expedition team found a single female bee alive, BBC News reports. "It was absolutely breathtaking to see this 'flying bulldog' of an insect that we weren't sure existed anymore, to have real proof right there in front of us in the wild," Bolt told BBC News.

The discovery brings new hope for the future of this rare, not-so-little insect. There are currently no legal protections around Wallace's giant bee’s trade, says BBC News, and the bee’s habitat is threatened by widespread deforestation, according to The Guardian. But conservationists hope to now push for more research and better protections for Wallace’s giant bee, BBC New reports.

"By making the bee a world-famous flagship for conservation, we are confident that the species has a brighter future than if we just let it quietly be collected into oblivion," Robin Moore, a conservation biologist with Global Wildlife Conservation, told BBC News.