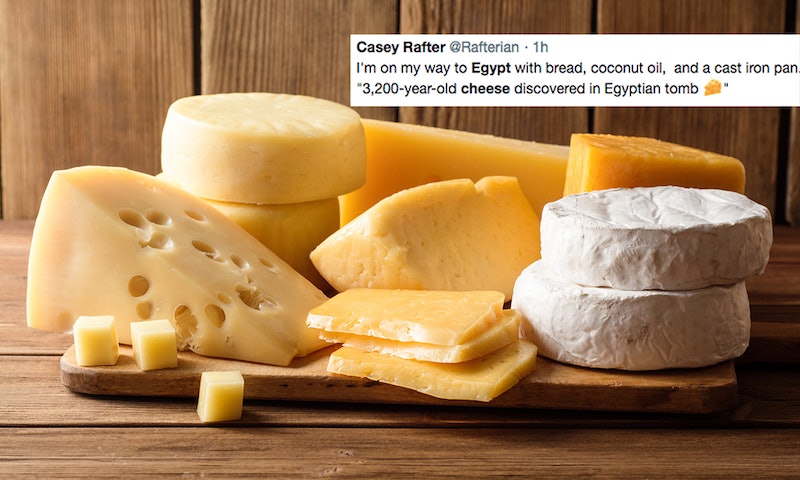 Cheese lovers across the world, listen up: This is one cheese we should all stay away from. The world's oldest cheese has been discovered in Egypt... and apparently, it might be cursed. Yes, you read that right. Someone maybe put a hex on cheese. A recent paper published in the journal Analytical Chemistry explores the discovery of the oldest cheese ever found. The ancient cheese was unearthed by researchers from the University of Catania, Sicily and Cairo University, and it just might be proof that cheese will most certainly survive the zombie apocalypse.

This is welcome news if you've been dreading having to eat those ready-to-eat meals in your disaster kit that are good for eleventy-million years but no doubt taste like sawdust. The old-AF cheese was found in the tomb of Ptahmes, an Egyptian pharaoh who wanted to be buried with a snack he could enjoy in the afterlife.

If you subscribe to the folklore that disturbing the tomb of a mummy will lead to a curse, this means that the ancient cheese also carries a curse, but probably only if you eat it. Live Science reported that the 3,300-year-old cheese could contain a bacteria that causes a contagious food-borne illness known as brucellosis, which is a curse in itself. Seriously, no matter how hungry you are, don't eat old cheese you find in a grave.

According to National Geographic, belief in the curse of the mummy spread in 1922 when King Tut's tomb was discovered. When the tomb was opened in 1923, many people involved died within 10 years. However, fear of the curse actually dates back to 100 years earlier. Though the King Tut tomb raiders likely died due to it being old-timey days when not much was known about the spread of disease, the curse of the mummy persists.

The newly discovered old mummy cheese is important because it could be evidence that brucellosis was present in ancient Egypt. If you want to play devil's advocate, you could argue that it's possible that Ptahmes was entombed with the very thing that killed him — cheese. And, because the cheese might contain brucellosis, researchers can only speculate what it taste like.

"For me it’s really hard to imagine a specific flavor. I’m Italian, I love cheese, and I know how much they can change in flavor and appearance even with very few differences in ingredients and process," Dr. Enrico Greco, a chemist at the University of Catania, Sicily, who analyzed the mixture of buffalo, sheep, and goat cheese, told The Times.

Dr. Greco aded that if he could be buried with his favorite cheese, he would. Hey, it's 2018, you can be buried with anything you want. If cheese is your jam, tell your nearest and dearest that in lieu of flowers you want well wishers to put your favorite cheese in your casket. It's your funeral, you can ask for whatever you want. And, if being buried with cheese if your heart's desire, don't let anyone stop you.

Case in point, the Philadelphia Inquirer reported that a Pennsylvania man named Richard Lussi requested to be buried with two of his favorite Philly cheesesteak sandwiches, and his family obliged. He reportedly also asked that the cheesesteaks not be put in his casket until after the viewing because he was worried people would steal them. Apparently, theft of cheese is a real concern among cheese lovers.

"It shocked some people that we did it, but not the people that really knew him,” Richard's son John told the newspaper. "We joked about wondering if he was going to share the other one when he got to heaven." Extreme devotion to cheese is nothing new. In the 1600s, a writer named Samuel Pepys buried his favorite Parmesan cheese when he fled a fire, according to the UK website History House.

The cheese was expensive, and apparently highly sought after by thieves. So my friendlies, the cheese lesson here is two fold: The curse of the mummy cheese is actually just horrific food poisoning, and always take your cheese with you, even to the afterlife. Because, whomever dies with the most cheese wins. Obviously.