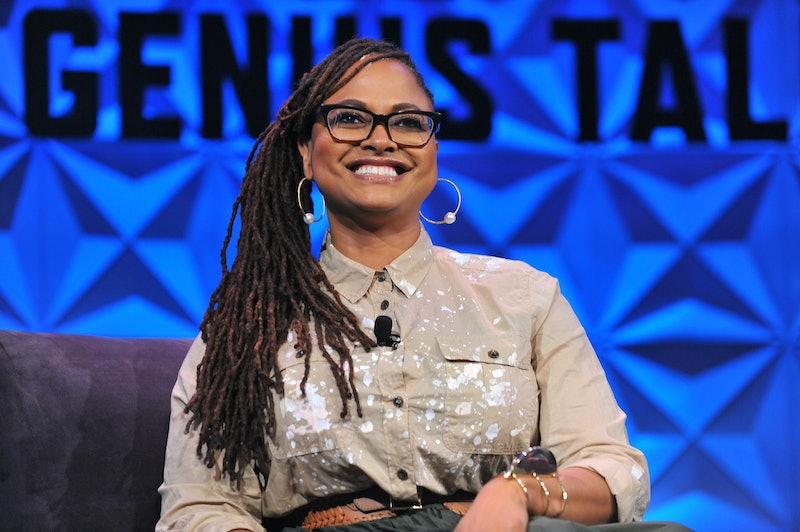 The excitement for Ava DuVernay's next film has reached a fever pitch thanks to the first A Wrinkle In Time photos released by Entertainment Weekly on Wednesday. Oprah Winfrey, Mindy Kaling, Reese Witherspoon, Storm Reid, and Levi Miller all appear as Mrs. Which, Mrs. Who, Mrs. Whatsit, Meg Murry, and Calvin O'Keefe respectively. We also get a look at Chris Pine as Meg's father who goes missing. If nothing else, it's clear from these photos that this adaptation will be both magical and faithful to the book that many people grew up with.

“The first image [I had in my head] was to place a brown girl in that role of Meg, a girl traveling to different planets and encountering beings and situations that I’d never seen a girl of color in,” DuVernay told EW. “...There aren’t any other black women who have been invited to imagine what other planets in the universe might look and feel like. I was interested in that and in a heroine that looked like the girls I grew up with." And true to the director's vision, A Wrinkle In Time's film adaptation depicts a diverse sci-fi adventure the likes of which audiences just don't get to see that often.

That attention to diversity continued above and beyond the film's main characters and into the guides known as Mrs. Who, Mrs. Which, and Mrs. Whatsit. "My whole process with this film was, what if? With these women, I wondered, could we make them women of different ages, body types, races?" DuVernay said. "Could we bring in culture, bring in history in their costumes? And in the women themselves, could we just reflect a fuller breadth of femininity?"

The importance of that kind of thinking can't be understated, because so often when it comes to casting for science fiction and fantasy movies that doesn't seem to be a consideration. Countless think pieces have been written about how people of color have been excluded from SFF. The Huffington Post pointed out in 2014 that "When people of color do appear in science fiction, it’s often as sidekicks or advisers. Black characters are likely to die quickly and are unlikely to ever interact with any other black characters, since many galaxies seem to contain only about three black people." Black Girl Nerds wrote a 2015 article proving that "Even over 40 years ago, the film industry had the same problem it still has today: a lack of diversity in films set in the future and in movies altogether."

So, DuVernay's perspective is refreshing, because from the very start she was considering how this fictional universe that blends both scientific and fantasy elements could actually reflect the real, diverse world in which we live. And if these photos are any indication, that's far from the only way that A Wrinkle In Time will aim to break boundaries when it rolls into theaters.

More like this
Keke Palmer Hopes 'Lightyear' Will Help “Normalise” Same-Sex Relationships
By Sam Ramsden
Why You're Seeing Green Bandanas At Abortion Rights Protests
By Lexi Inks
Lilibet & Prince Charles’ First Meeting Was Emotional, According To Reports
By El Hunt
'Mean Girls' ​​Daniel Franzese Spoke Candidly About Conversion Therapy
By Rachel Mantock
Get Even More From Bustle — Sign Up For The Newsletter