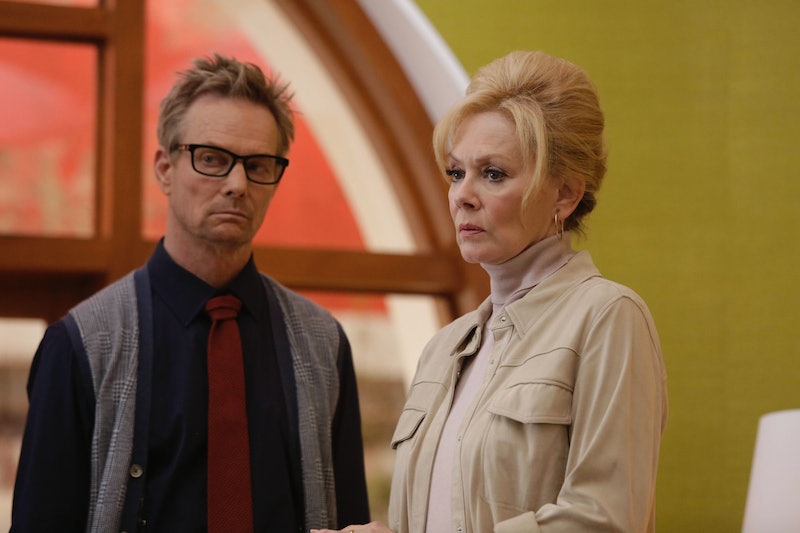 Legion is as coy about its connection to the X-Men universe as Jessica Jones is to The Avengers, but every now and then a detail slips in that cements its place in the comic book world. In fact, there's a pretty cool new Marvel Easter egg in Legion that may have slipped past you at first, and could have a deeper meaning. The X-Men logo showed up in an unexpected place.

When David brings everyone out of his memory in Episode 3, and teleports them halfway across the Summerland campus, there is a window behind Jean Smart's character in a circular shape and sashes that cross diagonally to make X-Men logo — the same one that fills out the "o" in Legion in the show's title card. Pretty cool, right?

Is that just a production detail for fans, or has Melanie Bird met Charles Xavier? Since David Haller is Professor X's son in Marvel comics, I wouldn't be surprised if the show was alluding to a connection. Even if the more recognizable X-Men characters never show up on this series, it would be interesting to discover a history there. Melanie mentioned "divisions," which I assume has to do with either divisions in the mutant community or between mutants and the government. Surely, somewhere, the X-Men that we know and love were involved in this conflict.

However, it seems like Legion wants to set itself apart as a supernatural series, and its doing a spectacular job. Maybe hints and glimpses like the X-Men window at Summerland will be all we get. I'm fine with that too, honestly. As long as there isn't a Wolverine-shaped elephant in the room, Legion can continue to be a weird, aesthetically pleasing show in whatever way it pleases.