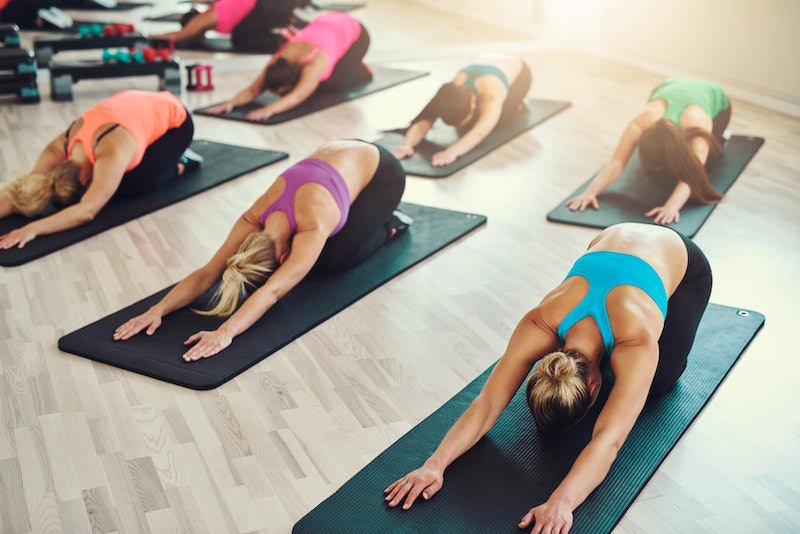 In a world where Donald Trump is the President of the United States, his administration's policy decisions throw us into constant states of shock and despair, and his chaotic social media presence makes every week feel about a year long, we certainly have no shortage of stress. In fact, according to research conducted by the American Psychological Association in January of this year, there was a significant rise in stress among Americans for the first time since 2007. We're all feeling the pressure of the current political climate — and it's weighing us down in immense ways.

However, we must be conscious enough to see that the political landscape doesn't affect everyone in the same way. Studies have shown that people from marginalized communities who regularly experience discrimination are much more stressed out than the majority population. And it's the kind of stress that has long-lasting physical and mental effects.

For example, the Study of Women's Health Across the Nation (SWAN) estimated that black women are 7.5 years biologically older than white women, and 27 percent of that difference arises from the stress and poverty that comes with being a black woman in America.

A study in Sociological Inquiry also found that racial minorities generally experience more stress than white individuals. In a survey of over 30,000 people, it was found that 18.2 percent of black people experience emotional stress and 9.8 percent constantly live with physical stress; the same was only true for 3.5 and 1.6 percent of whites, respectively. As a result, people of color are physically and mentally sicker than their white counterparts.

April is Stress Awareness Month, so you may have seen your fair share of social media posts that provide many different tips for self-care, like taking a long bath or rubbing charcoal clay all over your face. You may have also noticed that the yoga and wellness communities are the ones who lead these discussions on how we can reduce stress, empower ourselves, and live our most fulfilling lives.

It's no secret that the yoga world is dominated by white people who come from a place of privilege.

All it takes is a few glances, though, to see that the vast majority of people teaching self-care and stress relief are white. Rarely ever in the mainstream media do you see a POC leading a panel or conducting a workshop.

It's no secret that the yoga world is dominated by white people who come from a place of privilege. What was originally an Eastern philosophy became a fitness gold mine of pricey stretchy pants and luxury retreats. Sure, science has proven time and time again that yoga and meditation can reduce stress and anxiety, but the very people who need these practices most are being excluded from the benefits.

Bustle spoke with Jessamyn Stanley, yoga teacher, body positive activist, and author of Every Body Yoga: Let Go of Fear, Get On the Mat, and Love Your Body. "The [yoga] industry is rife with size and race discrimination and it can be difficult for many minority teachers to find employment," she says. As a result, she witnesses far too many POC who feel uncomfortable stepping foot into a yoga studio, because it's just one more place where they expect to be discriminated against.

The race-related stress that black women face negatively affects their overall cardiovascular health, making them more prone to a heart attack, and research has even shown that this stress results in higher infant mortality rates among black mothers. Yoga certainly can't solve these problems, but Harvard research shows that doing yoga regularly can lower your risk of heart disease and give practitioners a sense of calm in a sea of chaos. Yet most WOC are missing out on these advantages.

"Wellness is both a right and a luxury, but it's often only portrayed as the latter," says Nicole Cardoza, the Founder and Executive Director of Yoga Foster, a nonprofit that provides free yoga training and curriculum to teachers who work at underserved schools in marginalized communities.

Cardoza believes the lack of diversity in the yoga and wellness world is a result of "a lack of representation at the executive level, a lack of visibility for communities of color, and a misrepresentation of the value of the industry to its audience." She notes that, although there are diverse yoga communities around the country, the general public doesn't ever see that. As a result, we're made to believe that the yoga world only has room for white individuals.

Faith Hunter, an internationally renowned yoga teacher and studio owner, agrees. "A lot of this has to do with imagery," she tells Bustle. Whether it's a yoga magazine cover, a workshop, or a festival, wellness is overwhelmingly represented by whites. Hunter says she herself has led multiple events where POC only attended because they saw a black woman on the flier.

"The answer shouldn’t be to simply fill a space with more black and brown bodies, or hire more diverse models for the next ad campaign," Cardoza tells Bustle. "What we’re missing is an alignment of the value of this practice to communities that can benefit from it most, communities that oftentimes have less money — but, more importantly, time — to invest."

"That’s the only reason they showed up to take my class or my workshop, because they saw my image," she says. "I’m typically the only person of color. I look around and [ask], ‘Where are my other brown people?'"

When prompted as to how this lack of diversity should be addressed, Cardoza brings up a compelling point.

"The answer shouldn’t be to simply fill a space with more black and brown bodies, or hire more diverse models for the next ad campaign," she tells Bustle. "What we’re missing is an alignment of the value of this practice to communities that can benefit from it most, communities that oftentimes have less money — but, more importantly, time — to invest."

Our society primarily sees wellness and peace of mind as a luxury, which is why the yoga industry has become so lucrative over the past several years. But that's precisely what's driving away POC who desperately need (and deserve) the chance to de-stress, take care of themselves, and find healing.

"Yoga is the key to cleansing and fortifying body, mind, and spirit in our current political and social climate," Stanley says. "It's critical that all human beings — especially POC — focus on this kind of cleansing and fortification. They want to take our drive, our spirits, our strength, but we can't let them do it."

"This practice serves a broad spectrum of people," Hunter reminds us. "It doesn’t matter what shade or color you are.”

Change starts with the leaders of the community, including and especially the white women who are at the forefront of the yoga and wellness industry. It's their responsibility to speak up, to point out the fact that the panel they've been invited to speak on doesn't include a single POC.

Additionally, Cardoza insists that "community leaders are also wellness leaders." She sheds light on the fact that, in addition to yoga instructors, there are numerous individuals who run churches, shelters, schools, and centers that are dedicated to bringing wellness to POC.

We need to give them the platform to speak up. We need to give them to chance to lead the way. Because the stress marginalized communities are currently experiencing is chipping away at their health and wellbeing. And there's no better time than now to lend our support.