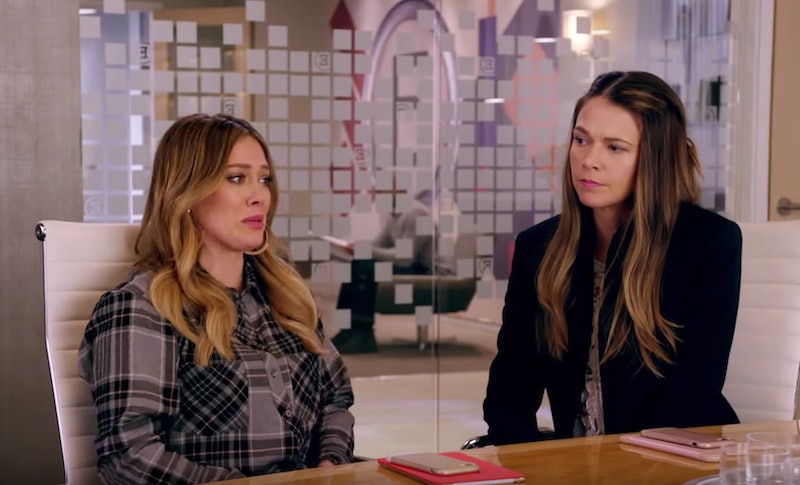 After over eight months of waiting, fans of the TV Land show Younger finally have some good news about when they can expect to catch the riveting drama of the cutthroat publishing industry. Younger Season 6 will premiere on June 12, as the entire cast announced in a cute video that came out on Tuesday afternoon.

In the season premiere date announcement video, stars Hilary Duff, Sutton Foster, Peter Hermann, Nic Tortorella, Miriam Shor, Debi Mazar, Molly Bernard, and Charles Michael Davis each received an envelope labeled "Big News," which held the June 12 premiere date inside. "We're back," Hermann said, upon opening the envelope, followed by Shor singing out, "June 12!" Based on the video, it seems like the entire cast are just as relieved to find out when the series returns as the fans will be.

So much changed at the end of Season 5 of Younger that Season 6 has potential to feel like a completely different show. And now all you have to do is hold on for another three months or so until you find out what happens after Liza's relationship with Charles (Hermann) went public, how Kelsey (Duff) handles her new job as a publisher, and what happens with Josh (Tortorella) after he realized that he wants to get together with Liza. It would be easy to think that, with Liza and Charles going public, #TeamJosh might be done for good, but after that Season 5 finale cacao ceremony, perhaps Younger fans can expect more of the lust-worthy love triangle to tear further teams apart with Season 6.

Season 6 is largely shrouded in mystery, but Deadline revealed that Charles and Liza's career moves will factor into the plot. "Liza and Charles get acclimated to their new normal now that Charles (Hermann) is no longer running the business," Deadline wrote in their synopsis of the new season. Perhaps Charles will struggle with his new role as chairman of the board — a role that comes with fewer responsibilities. A storyline about a man's insecurities over his girlfriend outshining him at work — or earning more — could very well be in the cards for the next season of the show, and it would definitely fit in with Younger's often culturally relevant storylines.

Last October when Foster spoke with Brit+Co about what she expects from Season 6, she agreed that Charles and Liza could face contention with their career roles. "I think there’s always hope for Liza and Charles. I really think they love each other. But I also think that now they’re stepping into more of a reality of what their relationship is, and that’s complicated," Foster said. The actor then added, "I’ll be super curious to see how it really plays out."

Deadline also confirmed that the show's dynamic, beloved guest stars Laura Benanti, Phoebe Dynevor, and Michael Urie will return for Season 6, and a few faces from the literary world, novelists Michael Cunningham and Meg Wolitzer, will also appear in Season 6.

With so many shows ending this spring —You're the Worst, Crazy Ex Girlfriend, Jane the Virgin — it's more important now than ever that TV lovers have a favorite show to look forward to. The next season of Younger will probably seem totally different for lots of reasons, but overall it will feel like coming home, and it's what fans deserve.