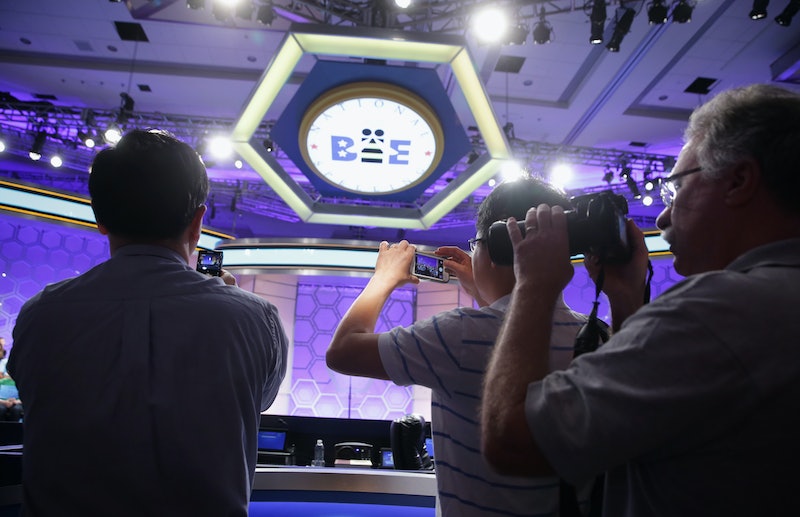 Every year, child prodigies from around the country gather together at the prestigious Scripps National Spelling Bee to school us on how to spell words like "sevruga" and "jacamar" and compete for the title of National Spelling Bee Champion. This year, one competitor is generating quite a bit of buzz — and she's still in kindergarten. Six-year-old Edith Fuller is the youngest Scripps spelling competitor in history, solidifying her status as the latest "spellebrity."

Fuller, who is homeschooled by her parents in Tulsa, Oklahoma, qualified for the competition at the age of five after beating out 50 other students across Eastern Oklahoma at a regional competition last year. She was declared the winner after correctly spelling the word "jnana," a Sanskrit word that refers to an elevated state of knowledge and frankly is the perfect word to describe Fuller herself.

Fuller's parents knew that the young girl had a gift when she correctly spelled the word "restaurant" at a family dinner last summer, even though she had never been taught the word before.

"We knew there was something special there," said Annie Fuller, Edith's mother.

Since then, the family has been preparing Fuller for the competition, which began on Tuesday in Washington, D.C., using Scripps official training materials.

Fuller isn't the first six-year-old to reach the competition stage, but she is officially the youngest. In 2012, six-year-old Lori Anne Madison correctly spelled the word "vaquero" — the Spanish word for "cowboy" — to qualify for the national spelling bee, and last year Akash Vukoti, a young boy from San Angelo, Texas, correctly spelled "circumspectly" to earn his spot.

Though neither small genius ultimately won the national competition, Fuller is hoping to become the youngest child in history to earn the coveted spelling champion title. With the competition already underway, Fuller is focused on the goal.

Fuller will be competing against spellers twice her age this week, some as old as 14-year-old eighth grade students. But Fuller, who often has spelling competitions with her siblings just for fun, isn't feeling the pressure.

"I really think I might go to the semifinals," Fuller said after completing the competition's vocabulary test on Tuesday.

The oral spelling portion of the 90th Annual Scripps National Spelling Bee will air on ESPN on Thursday, and whether or not Fuller wins, she's already a shero in my book.