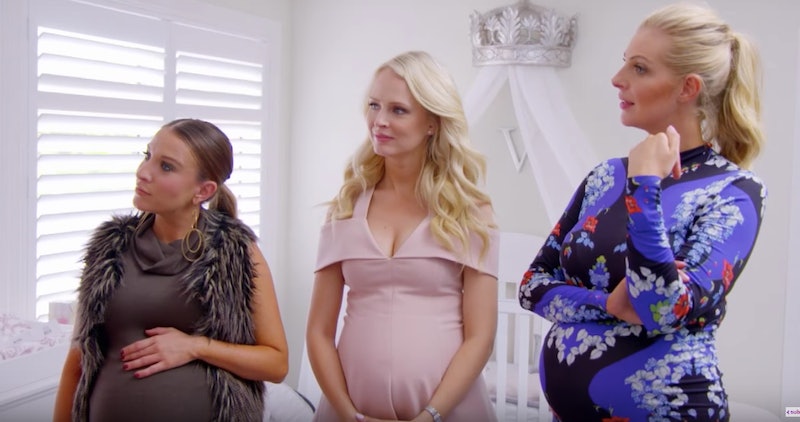 What seems like an Australian spin on Real Housewives, Yummy Mummies is coming to Netflix on December 28. The first two seasons have already aired in Australia, and those who've had the privilege of watching will tell you that the Yummy Mummies cast is all glamour and no games. Well, maybe a few games. Regardless, though, the four women who star on the show have led some noteworthy lives before adding "reality TV star" to their resumes.

The show's first season follows the crew of moms as they navigate their very different pregnancies, which can be tricky, especially when they're doing it in heels. A review of the show from The Guardian vows that the ordinary outfit of motherhood — disheveled hair, sleepless eyes, and clothes stained with who-knows-what — cannot apply to them. “These gorgeous girls have got it all," the narrator says while one of the women excitedly pulls a gold necklace from a gift box. "The cars. The money. The perfect life.”

The show documents the four expectant mothers preparing for the arrivals of their babies, and making the decisions every mom is faced with — about breastfeeding, about sleeping, about what color the nursery will be painted — but they also make decisions many moms would never dream of making, like in which luxury designer will the baby make its press debut.

Nonetheless, these mothers have a story to tell, and thanks to Netflix, everyone can see how it unfolds, and maybe cringe a little bit. Here are the four yummy mummies.

Merrington and her now family of three are expecting yet another addition in real time. She's currently 24 weeks pregnant with her second child, but that isn't slowing her down. She and her husband, Andrew Merrington, and their toddler, Penelope, or "Lady P," as they call her, are busy bees — they're always on set somewhere doing photoshoots and interviews. Merrington was pregnant with Penelope (check out her adorable Instagram) during the first season of Yummy Mummies. She's also a traffic reporter, according to her Instagram bio.

Watts seems to be the most down-to-earth of the four yummy mummies and the TV show was her first real brush with publicity. She seems to take the chaos of life as it comes — she just looks really good doing it. She was pregnant with her now-toddler son, Harvey, during Season 1 and has since welcomed another little boy, Harry, who is two months old.

The only one to enter Season 1 having already experienced pregnancy once, esteemed Australian model Scandizzo has tons of wisdom to impart on the other moms. At the time of filming Season 1, she was mom to her toddler, Jagger. Since then, she and her celeb hairstylist husband, Joey Scandizzo, have welcomed another little boy, Jensen. She's currently 37 weeks pregnant with baby number three.

She's notably the most controversial character on Season 1 of Yummy Mummies, which of course, made her the most popular. The other moms sometimes struggle to accept her overly lavish lifestyle, which for them, is saying something. One clip in particular follows Di Geronimo as she gives the other three a tour of her then-unborn baby Valentina's nursery, which was stocked full of designer clothing of all sizes up to those for 14-year-olds.

After being disappointed with how she was portrayed in Season 1, she decided to leave the show, according to Who, an Australian news outlet. In October, The Daily Mail reported a split between her and Valentina's father. Her Instagram account is now set to private.

If you like Real Housewives, you won't be able to stop watching Yummy Mummies when it releases globally, so you might want to clear your calendar in advance.