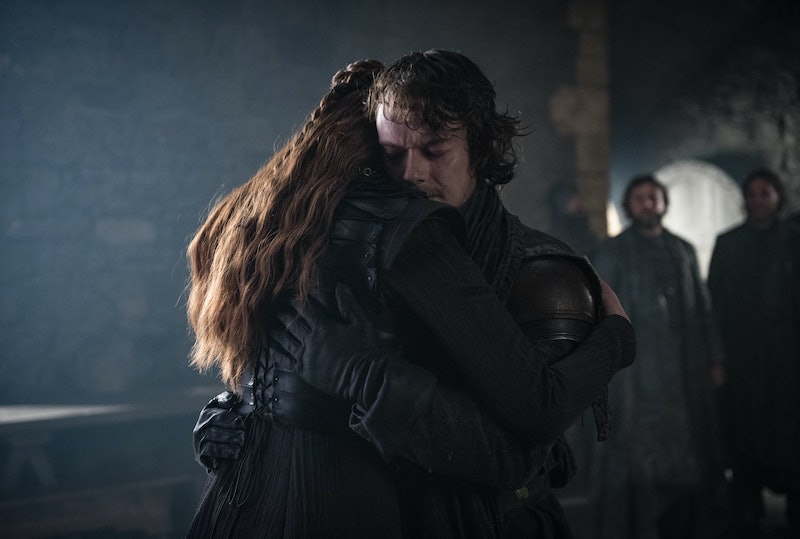 The fate of Westeros may hang in the balance, but that isn't stopping Game of Thrones from providing as many heartwarming reunions as possible before Winterfell becomes an absolute bloodbath. One such reunion included Theon returning to Winterfell to fight for Sansa, knowing full well it could cost him his life. That's a pretty significant gesture on his part, however, knowing Theon and Sansa's Game of Thrones relationship timeline will help you to sort out whey he's willing to take up arms against the Night King and his army even though he doesn't have to. After all, it's not like Theon has been known to show immense bravery in the past, but his connection to Sansa comes with some deep-rooted history.

Understandably, some fans may not be quite ready to forgive Theon for everything he's done in the past on this show. He betrayed Robb Stark, took over Winterfell, burned two innocent boys alive and passed them off as being the Bran and Rickon Stark; not to mention, he beheaded Ser Rodrik. That's a lot to set aside and forgive, even if he is trying to make amends for his former sins. And yet, it seems that Sansa has been able to do precisely that since she welcomed him back with open arms and is even trusting him to guard Bran when the Night King comes for him during the battle. So how is it that their friendship has been able to withstand the test of time? It came at a cost...

Neither of these character talked to each other during this episode, but fans soon learned that Theon was the Stark ward and had lived with the family at Winterfell for quite some time. It didn't seem as though Theon and Sansa were very close to one another, but given their close proximity to each other, they had to interact on and off throughout the years, but if they were friends the series never indicated it.

She didn't immediately discover Theon's presence or that Ramsay had renamed him Reek, but this was the first time these two characters were in the same place at the same time since the series began.

Ramsay instructed Theon to apologize to Sansa about all the things he did to her family in the most awkward and insensitive way possible. And while this did nothing to bring them closer together, it allowed her to catch a glimpse of the monster Ramsay truly was and what he had done to Theon, both physically and psychologically.

Theon was forced to watch in horror as Ramsay raped Sansa on their wedding night. He wasn't able to stop it from happening, but it proved to be a driving force for all his future actions.

Theon's redemption story truly began when he helped Sansa escape Winterfell. The two of them leapt off of a very high wall together, hand-in-hand, united by the trauma they'd both suffered at the hands of the same person.

Just when they were about to be captured by Ramsay's men, Brienne and Podrick arrived to save the day. Theon knew Sansa would be much safer with them by her side, even though he would've died trying to get her to the Wall so she could reunite with Jon. They shared an emotional hug and parted ways.

Now, here we are, and Theon has returned to fight the White Walkers in Sansa's honor. It was clear from the looks they were giving one another that their shared history has bonded them forever. They care deeply for one another and have a deep understanding of what the other has been through over the years.

Some may want to turn that into a romantic relationship, but that doesn't necessarily have to be what this is about. They were there for each other in their darkest hours — and that's something you never forget, regardless of how much time goes by.