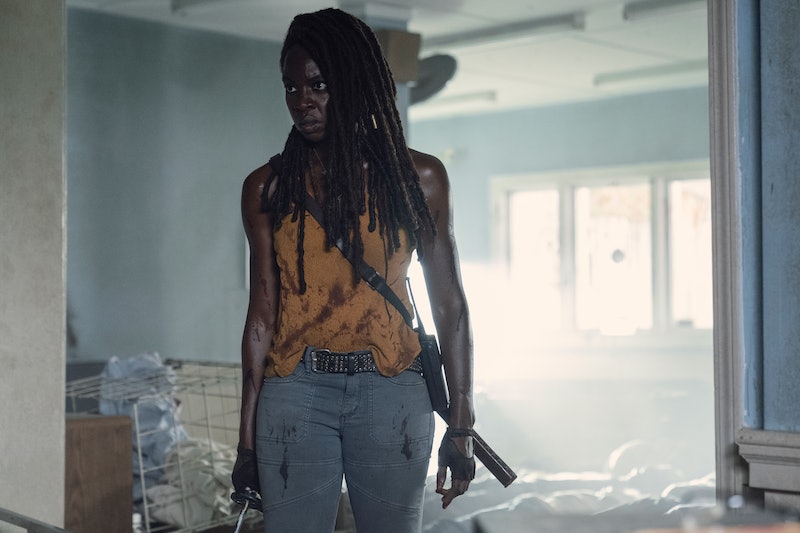 Spoilers ahead for The Walking Dead Season 10. Sunday night's episode may have served as Danai Gurira's last appearance on The Walking Dead, but it also provided some hope that a Michonne and Rick reunion could one day be in the cards. That's thanks, in large part, to the cowboy boots and message Michonne found on Rick's phone on The Walking Dead, which featured sketched images of both herself and Judith on the glass screen, along with Rick's signature as well as some cryptic lettering. It was enough to convince Michonne that Rick is still alive, sending her on a new mission to track him down instead of returning to Alexandria.

The drawings and Rick's signature are pretty self explanatory; however, the lettering and the meaning behind it was a lot less clear — especially if you don't read or write Japanese. While speaking to Entertainment Weekly, Walking Dead showrunner Angela Kang confirmed that the message was written in Japanese and translates to mean, “Believe a little longer." The words seem to indicate a sign of hope, though what for remains to be seen.

The most pressing question about the message on Rick's phone is who actually left it. Executive producer Scott Gimple teased to Comicbook.com that Rick could have been the author behind the message, meant to serve as a reminder of what he's fighting to return home to. But if he did write it, how could he have drawn a likeness of Judith, who is six years older now than the last time he saw her? "I will say he doesn't necessarily, he doesn't need to have seen her recently," Gimple hinted. "There's a little extrapolation that could be there, too. I'm just saying."

That being said, there is also another possible explanation: Rick isn't the one who drew the images or wrote those Japanese characters. Kang indicated during her EW interview that the message wasn't from Rick, it was for Rick and created by somebody else entirely. "It was a message to Rick from somebody, somehow on this boat," she explained.

The last fans saw of Rick, he was being flown away via a helicopter and taken to who knows where. He could've encountered a number of people over the last six years. It's likely he would've talked about both Michonne and Judith during that time, so perhaps this mystery person wanted to give this to Rick as a gift. But if that's the case, how would they know what Michonne and Judith look like? It's possible someone from Rick's new life has been watching Alexandria this entire time and reporting back to him with updates.

Let's also not forget that Jadis joined Rick on the helicopter and was already familiar with his life prior to that moment. Perhaps she's the phone artist and has been periodically checking in on how Michonne and Judith are doing. But then why not tell them that Rick is alive or allow him to come back himself? Could he actually be in serious trouble and in need of rescuing? As per usual, Walking Dead leaves fans with way more questions than answers, but now that Michonne is on the case, let's hope she'll ultimately be able to get to the bottom of where Rick has been and whether or not he needs saving.