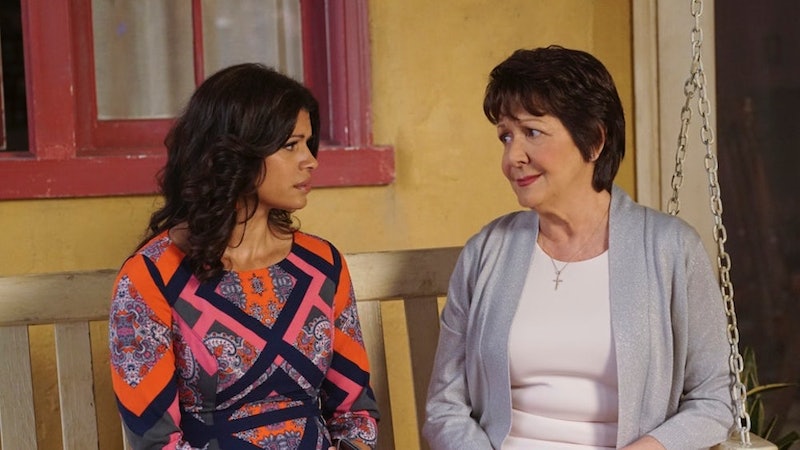 Xiomara has been through a lot these last few seasons, which is why it's been so great to see her finally pursue her dream of becoming a nurse. But with only a handful of episodes left to go before the series finale, it's time to start thinking about what Xo's fate will be on Jane the Virgin when all is said and done. There are several ways her storyline could play out and while the majority of them skew toward a happy ending, there are also a few grim possibilities that could come to pass as well.

This series has provided some truly heartwarming moments in the past, but it's also introduced plenty of heartache into the equation as well, which means no character is completely safe from tragedy. Figuring out which category Xo falls into, though, is easier said than done. Obviously, the ending is meant to be a surprise for viewers, so details about how everyone's storyline plays out is being kept under wraps, but that shouldn't stop us in trying to predict what life has in store for Jane's mom during these final few episodes.

Odds are at least one of these theories will come to pass by the time the show is over...

Her breast cancer is currently in remission, but that prognosis could change at any time. Jane the Virgin creator Jennie Snyder Urman told TVLine in an interview back in March that "there are deaths" that will happen in Season 5, adding that "It’s a telenovela. People are going to have to die." Could Urman been referring to Xo? Will the cancer end up eventually taking her life? Given how scary and unpredictable cancer can be, this is sadly a very plausible outcome, though hopefully one the characters and fans won't be forced to face.

The idea of this happening feels downright preposterous given how much these two are clearly in love. But then again, this series loves throwing shocking twists at viewers (like bringing characters back from the dead a la Michael), so anything is possible at this point.

Even if Xo isn't the one who ends up dying, that doesn't mean it won't happen to someone close to her — like say, her husband Rogelio, for instance. He just had a recent scare involving his heart over the stress of his new show. Could that be an indicator of a bigger health issue sometime down the line? Let's hope not, but that could mean Xo will become a widow at some point down the line.

She Becomes A Nurse

Then again, perhaps all of this worrying will turn out to be for nothing. There's also a chance that Xo and Ro will continue to be happily married, her cancer will stay in remission, and she'll go on to get her nursing degree. Maybe it's naive to think things could end so well, but it's definitely a happy ending she's more than earned.

The way things stand, Xo's story ranges from happy to downright tragic. All fans can hope is that the outcome proves to be the former rather than the latter.