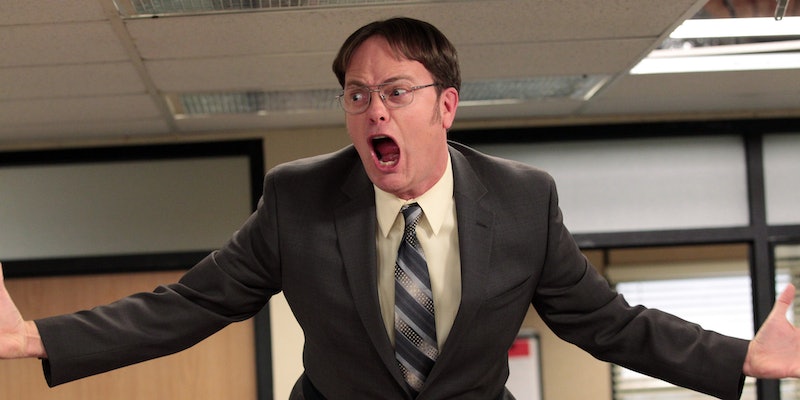 It is a common underlying theme in many of cinema's most fantastic films: rats. No, not like Ratatouille (the protagonist of which is actually named Remi), but the informal kind of rat: a person who betrays their friends or business associates for personal gain. The whole plot of 1993's Jurassic Park begins with a computer programmer at the park steals fertilized dinosaur embryos and gives them to a ~bad guy~, for example. But perhaps the reason this Hollywood trope used so often has to do with the fact it is believable. In the real world, people do pose as a threat to those around them. New research suggests determining the identity of a potential threat to a company may not be as complicated as the movies make it seem — in fact, there are four different types of employees who pose a threat to their companies, according to new research.

In a collaborative study between the Universities of Glasgow and Coventry in the United Kingdom, researchers have been able to determine those four distinct categories of employees as omitters, slippers, retaliators, and serial transgressors, all of which are responsible carrying out counterproductive work behavior.

Omitters are characterized by an inability to effectively self-regulate their actions. They accidentally break rules and need assistance from colleagues in order to be productive and reduce the insider threat risk they present. Slippers are described as employees who will perform single acts of counterproductive work behavior once in a while. This may include acts like taking home confidential documents occasionally, or being rude to others. Retaliators have perhaps the most apt name. They are employees who deliberately perform small acts designed to harm the organization. Over time, if their deeds go unchallenged, these can easily cause problems for colleagues, cost the company more money, and and create hostile work environments. Finally, serial transgressors are defined as employees who engage in a large amount of counterproductive work behavior that, in turn, may undermine the authority of management. This not only leads to inefficient work behaviors, but may increase the security risks of those they work with.

The research was funded by the Centre for Research and Evidence on Security Threats (CREST), a social research firm in the United Kingdom. Study leaders Professor Rosalind Searle and Dr. Charis Rice interviewed managers and employees, reviewed paperwork from security and human resource departments, and carried out anonymous surveys within one particular organization.

The study further revealed those psychologically detached from their workplaces are more likely to behave in a manner that makes them an insider security threat. Employees may grow detached from their companies as a consequence of things like organizational changes that could cause communication issues and inconsistent leadership, for example.

These findings are absolutely vital for the business world, Dr. Rice explained in the study. "There are many examples of high-profile companies which have made the headlines following employee sabotage. It is vitally important to understand how these situations come about: the types of employee who might resort to these behaviors; why it happens and how managers' actions can prevent this happening." She continues, explaining the ultimate goal of the research is to "... provide a framework to predict, identify and mitigate counterproductive work behavior and insider threat[s] within the context of organizational change."

The study also uncovered five ways in which managers can counteract the behaviors that could threaten a company. These include placing emphasis on fairness and consistency within an HR department during times of change, instituting a system of conduct in which reporting counterproductive working behavior is viewed as a protective measure rather than as a punishment, keeping communication between departments and hierarchies transparent, gathering individual feedback about organizational change, and having managers lead by example (thereby blurring the inherent hierarchical lines).

Basically, when a employee betrays their company, there is typically a traceable reason why. When noticed in time, it can likely be counteracted.