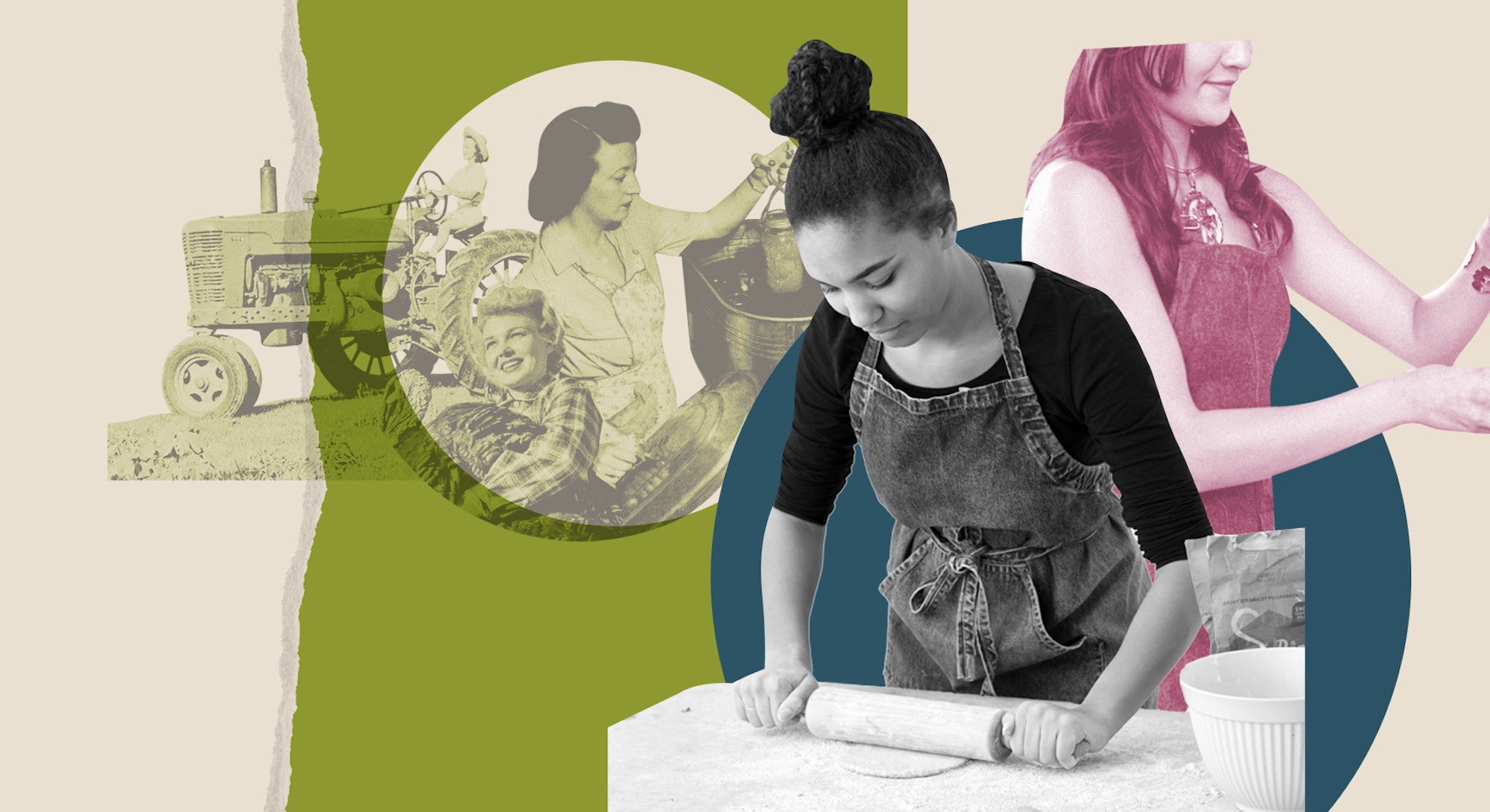 In Bed-Stuy, Brooklyn, Whitney Badge is washing her clothes in her bathtub, making all-purpose cleaner from orange peels, and consuming fewer animal products. “We’re not rationing,” the 24-year-old graphic designer says, “but we’re looking at our food differently, like how can we use this aquafaba?”

Over in New Jersey, Shula Rosenbaum, a 32-year-old fifth grade teacher, is comparison-shopping for chickens. “The very standard domestic breed, Rhode Island Red, lay the brown eggs, like one egg per day, and then there are the wild varietals that sometimes have really pretty turquoise eggs, like the Araucana. Those sometimes lay like every other day.”

"I have one friend who’s learning survivalist knot ties online. She felt called to do that.”

Emily Hartman, a 25-year-old program coordinator at a Toronto-based education nonprofit, has started pickling a photogenic array of vegetables. Julia Sloan, 30, a clothing designer who splits her time between New York City and Mexico, has been growing vegetables, repairing broken ceramics, and mopping floors in her home in San Miguel de Allende. On a group Zoom catch-up the other night, my friend Alissa, a 33-year-old behavior economist who works at a major tech company, appeared to be sewing. I DMed her asking what she was doing. “It’s a quilt I started before I got married,” she said. “I’ve also started gardening.”

It’s not surprising to see millennials respond to the pandemic by channeling Ma Ingalls from Little House on the Prairie — they may already have the calico Batsheva dress. But there is an urgency to COVID-19 homesteading absent from retro quarantine hobbies (pressed flowers, tie-dye) and the aspirational pantry organization and ironic cross-stitching of The Before.

Isolated in their homes, urged to grocery shop infrequently, and unable or unwilling to outsource domestic work, white-collar women have embarked on a housework journey. In March, U.S. search for "how to sew a" surged 250%, and 130% for "how to hand wash,” according to Google data. Search for "container gardening" was the highest it’s been all year.

“I’m not the only one pickling,” Hartman says. “Friends are turning to needlepoint. Others are mending their own clothes. I have one friend who’s learning survivalist knot ties online. She felt called to do that.”

But looming over every domestic feat is an acute, COVID-19-induced awareness of one’s privilege. Am I pickling because I fear for the supply chain, or because I’m safe, bored, and lucky? Badge and her roommate recently went from Bed-Stuy to the Trader Joe’s on Atlantic Avenue in Cobble Hill to get groceries. “We biked past a hospital that had tents set up and people lining up to get tested. There’s something super sobering about that. It’s very heavy.”

"Not everybody will be out there on the front lines, and that is OK.”

Still, she doesn’t think domestic projects amount to sticking your head in the sand. “Simply staying home and playing that role, you’re [making] a huge impact. Not everybody will be out there on the front lines, and that is OK.”

History will judge whether pandemic sourdough enthusiasts are inaugurating a new era of hardscrabble domesticity or whether it was all cosplay for Instagram Live. Elaine Tyler May, who studies the evolution of American women’s social roles in the 20th century, says there’s no analogy to be found in WW2 victory gardens or Cold War suburbia. Wartime America was characterized by loosening gender roles, as women emerged from the home to do jobs left by men. In the '50s and early '60s, middle class home life was glorified as an affirmation of American capitalism, she says. “This is just, ‘Stay home,’ which is different.”

Nancy Bristow, whose 2012 book American Pandemic is a deep dive into how the 1918 flu affected society, notes that in 1918 most women were still homemakers, doing all of the mending and baking that entailed. During the pandemic, on top of their usual housekeeping and child rearing responsibilities, they found themselves in the role of primary nurse, either to sick members of their families or volunteering as emergency nurses.

Amy Bentley, a food studies scholar at NYU who has researched World War II rationing and domesticity, says the urge to grow and cook things for ourselves, sometimes unnecessarily, is “definitely a continuation of this DIY thing we have had going on” for a while now, which is primarily a reaction to our current level of industrialization. Making things by hand is a fairly typical reaction to periods of increased mass production and the loss of autonomy they bring. However, the sudden spike in homesteading behavior points to the real economic hardship that has hit millions of households. “People don’t know how long they’re going to go without a paycheck. Our supply chain is pretty strong, but who knows how long this will go on,” Bentley says. “It’s pretty logical to look around and say, ‘How can I produce a little food?’”

Rosenbaum’s answer was chickens, and a return to her upbringing. When she was a kid growing up off New Jersey’s Route 1, her parents always had 10 or 12 hens grazing in the yard. Her mother was raised in Hungary, where her family kept fowl as insurance against Soviet food shortages. “It feels like one piece that you can control in a situation where we have no control,” Rosenbaum says. “The safety of shelter, the safety of food: if you can have some reliability around those two things, you can manage.”

Hartman grew up canning and preserving jams, spaghetti sauce, pickled vegetables, and peaches with her grandmother, who had a farm. Hartman hadn’t done it herself since she left home at 17, but now she has the time. “For me it was, ‘OK, we’re stuck at home, let’s do something productive and methodical,’” she says.

Badge, too, finds herself harkening back to her teen years. Ordering paint and Exacto knives, she feels like “a high schooler in my room doing projects on the weekends. This period of time is so strange that you have to rely on [the] self that you confidently know yourself to be.”

"This period of time is so strange that you have to rely on [the] self that you confidently know yourself to be."

Since entering the workforce, millennials have been accused of being cosseted, hounded by doubts about their grit. Every line-dried pillowcase and re-spackled wall says, Look at me, withstanding discomfort. And when you make do on your own for weeks at a time, you realize how little you require, or like the yoga instructors say, that what you require can’t be had Outside. “Do I need to go out, do I need to go pick X, Y, or Z up?” Badge asks herself every few days. “Most of the time the answer [is] no.”

While the necessity of all of this self-sufficiency is debatable, the dopamine hit that comes from even minor accomplishments is not. Some liken COVID homemaking to self-care. Badge describes changing out the cabinet knobs in her apartment as “investing in ourselves and the environment we create for ourselves and each other.” Sloan, in Mexico, is “getting in touch with my space,” not just by mopping and changing her sheets more regularly but also by supporting a local flower market, making fresh arrangements around the house.

"If I wasn’t doing the things like making my own meals, I don’t think I’d be tending to my mental health. I think I’d be checking the news,” says Badge.

As social distancing requirements ease around the country, will we retain our newfound subsistence behaviors or ditch them as quickly as you can say, “Can I get this dry cleaning delivered?” It seems unlikely that women who already had 50-hour work weeks, often with a second shift at home, will opt to keep mending and food preparation on the list, especially if they can afford to pay someone to do these things.

“I don’t think we’ll stop being a nation that values convenience and modernity and the benefits of industrialization and less expensive, shelf-stable products,” Bentley says. “Nobody wants to go without their coffee. Nobody wants to go without bananas. These are food chain items that we could not grow ourselves.” Still, she says, we are capable of adaptation. “I would never wish this on anybody, but sometimes people don’t adopt more economical habits or think about not wasting unless they have to, and crises often produce that.”

“I would never wish this on anybody, but sometimes people don’t adopt more economical habits unless they have to."

Rosenbaum is keeping her chickens. “Right now we’re reacting, but the way things are being examined and revised is going to be beneficial,” she predicts. “There’s definitely someone who hasn’t who’s reaching out to a local farmer for the first time.” Sloan has lost her appetite for fast fashion. “I know I’m very lucky, but being conscious of my purchases is something I feel this is teaching us.”

Nothing quite like this has ever happened before. It’s new psychological terrain, which does make us, in our own way, pioneers.

“Honestly,” says Badge, “[this is] the cleanest my clothes have ever been.”