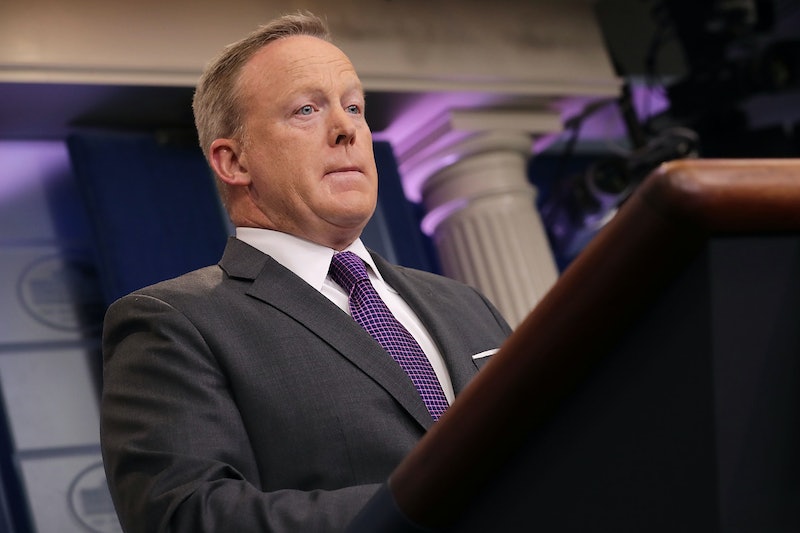 The internet might have anticipated Sean Spicer's resignation, but it never could have predicted that there would be a controversy over a mini fridge. After serving for six months, Spicer's time as press secretary came to an end and was followed by an interesting claim: Not long after he began his job for the White House, Spicer allegedly stole a mini fridge from his junior staffers. Naturally, the internet presented its own Spicer mini fridge jokes soon after the news appeared online.

The mini fridge story is actually from early on in Spicer's White House career, but the information has just now come out. In a story published by The Wall Street Journal on Friday, it was reported that the former press secretary had wanted a mini fridge in his office for a while. Instead of buying a mini fridge, Spicer allegedly asked one of his aides to go to an office near his own and take a mini fridge from White House aides. The aides reportedly refused to give the fridge up. Later on that fateful day, a coworker reportedly witnessed Spicer hauling the mini fridge to his own office, the WSJ reported. Spicer has not returned calls requesting comment on the claim.

With the help of Photoshop and the internet's immortal sense of humor, Spicer's mini fridge story is now one of the biggest jokes about Donald Trump's administration.

People cannot get enough of Melissa McCarthy's brilliant depiction of a panicking Spicer on the verge of a nervous breakdown, which appeared several times on Saturday Night Live. With the mini fridge story in, some want one last McCarthy portrayal of good ol' Spicey.

2. SNL Better Also Have The Segway Ready, Too

Who doesn't remember McCarthy cruising through New York City on her Segway as Spicer? Now folks want McCarthy as Spicer riding into the sunset with the signature podium and a mini fridge. It's a totally reasonable request.

Normally, if you need something, you buy it. But some joked that the allegations of Spicer swiping the mini fridge taught them a different way to get items.

If there is an office item joke, there's bound to be an Office Space joke somewhere, too.

This is a personal favorite. A user named "darth" has been compiling a thread of tweets since May 11. In this thread, there are frequent references to that one time Spicer was reportedly hiding by or behind bushes. With the news surfacing about the mini fridge, the user shared a hilarious image of a fridge in lush shrubbery.

Spicer had reportedly really wanted to meet the Pope, but apparently he wasn't allowed. This snub, of course, made an appearance in the mini fridge jokes, too.

7. The WSJ Lede Itself Is Just Fascinating

Sometimes you don't need a joke. Sometimes the story itself is the joke.

Spicer was known for his way of articulating his thoughts, so it makes that someone would joke about his famous period-at-the-end-of-almost-every-sentence oratory style.

Remember that excellent GIF of press members reacting during a White House press conference? Yeah, that came up, too.

10. There Was This Reminder As Well

One user "resisterhood" had a little reminder for everyone.

The moon in the background makes it magical.

It's a solid question.

Oh, Spicey. America will miss you.