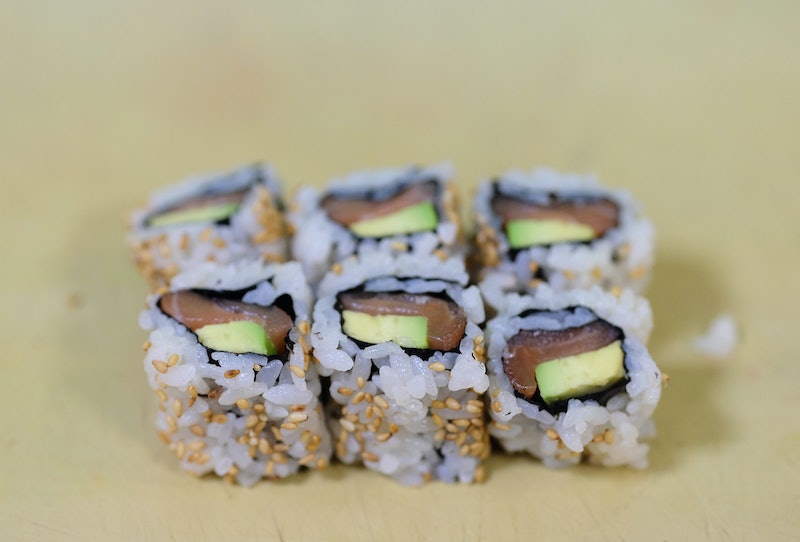 If you're in the middle of a meal right now, you might want to bookmark this page for later reading. And if you eat nearly as much sushi as I do, you might want to "x" out of this immediately and go on living your life in ignorant, potentially worm-filled bliss. Yes, I said worms: And I said it because a new report is alleging that some sushi might be filled with worms.

While I'm genuinely sorry to share this news with you, I'm glad for an opportunity to unload some of my grief. It's too much for one sushi eater to hold alone. If you eat a lot of raw fish, you're probably familiar with the concept/risk of contracting some sort of wiggly parasitical gut friends, but because we're largely told that the chances are minimal, our worries have been minimal — until now.

A study published last week in a BMJ Case Report indicates a new level of warning that's hard to ignore. The research in the study focuses on a 32-year-old patient who was admitted to a hospital for medical testing after suffering stomach pain, vomiting, and a fever for over a week. When his blood work returned to indicate a high white blood cell count, alluding to infection, and an interview indicated recent sushi consumption, alluding to a cause, doctors performed a gastrointestinal endoscopy. During the procedure, specialists are able to see the the inside of the digestive tract with great detail. Such great detail, that in this patient, they noticed a parasitical worm firmly attached to the lining of their gut. Cue: screams, gags, tears, disgust.

The condition is called Anisakiasis, and it's caused by nematodes parasites from the Anisakis family. In the past, they were only common in Japan, the raw fish capital of the world. But now, with sushi becoming ubiquitous on the U.S. dining scene, it was only a matter of time before it became it wiggled its way here, too. Basically, your first indication that you're suffering from Anisakiasis is unwavering stomach distress and a low-grade fever, following the consumption of raw, uncooked fish. Treatment includes a careful removal of the parasite along with repair for whatever internal damage it has already caused to the gut — and probably a lot of therapy, to be honest.

While this information should definitely make you weary about your sushi consumption, take a quick look on the FDA's Fishery Hazards & Control Guidance, and you'll see that it's no secret that uncooked fish can contain pathogens that we have no interest in interacting with. Every time we consume uncooked fish, we take a huge risk. And when it comes to fish, the term of "fresh, never frozen" is not a slogan you want to get behind. Cooking fish changes the composition and flavor, taking away its raw appeal. But freezing fish (for seven days, to be exact) not only kills most pathogens, but has little effect on flavor or texture. The truth is, most of the sushi that you do eat that doesn't make you sick, has been frozen. So know and understand the risk, opt for the "fresh, then frozen" preparation, whenever possible, or try to get into veggie sushi or cooked fish sushi — despite how boring or untraditional that might sound. A cucumber roll won't come with big flavor, but at least it won't come with worms.