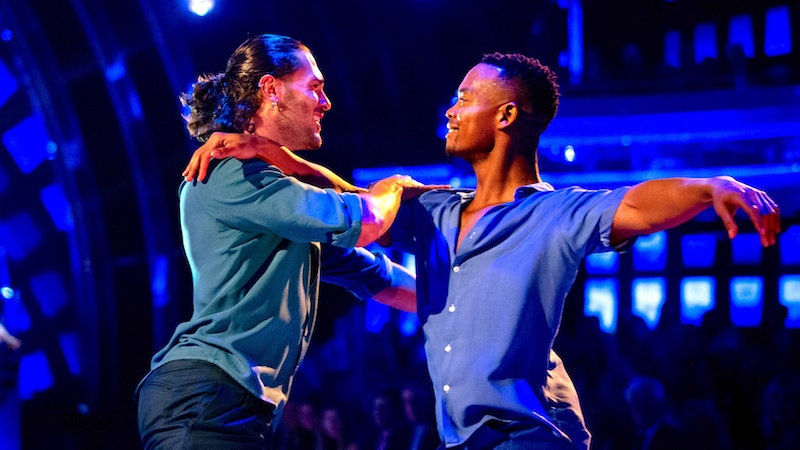 In a report detailing their most-complained-about TV moments of November 2019, the BBC has revealed that 189 people complained about Strictly Come Dancing’s same-sex routine.

Johannes Radebe and Graziano Di Prima made Strictly history on Nov. 3, 2019, when they danced together to Emili Sande’s performance of Shine. There has long been rumours regarding a potential same-sex pairing on the show, and the routine was met with applause and exctiement from many fans. Radebe, who is openly gay, spoke to Hello about what a huge moment it was for him:

"I've never felt so liberated. For the first time in my life, I feel accepted for who I am. That says so much about the people of this country. To be able to dance with a friend I respect and adore is joyous. There's bromance galore between us, but there were no male and female roles, just free movement. It was beautiful, classy and elegant."

Although Nov. 2 marked an important turning point in terms of LGBTQ representation on mainstream TV, the 189 complaints the BBC has since received is a sobering reality check.

For many in the UK, homophobia is a daily reality. Back in 2017, YouGov polled over 5,000 LGBTQIA+ people in the interest of seeing how their sexual identity affects their daily life. According to Stonewall: "The research reveals that anti-LGBT abuse extends far beyond acts of hate and violence on our streets" The survey found that one in five LGBT people have experienced a hate crime or incident because of their sexual orientation and/or gender identity in the last 12 months. In June of this year, the Guardian reported that the rate of LGBT hate crime per capita rose by 144% between 2013-14 and 2017-18.

In response to the complaints, the BBC has said:

“Strictly Come Dancing is an inclusive show and is proud to have been able to facilitate the dance between Johannes and Graziano during the Professionals’ dance. They are dancers first and foremost, and their sex had no bearing on their routine.”