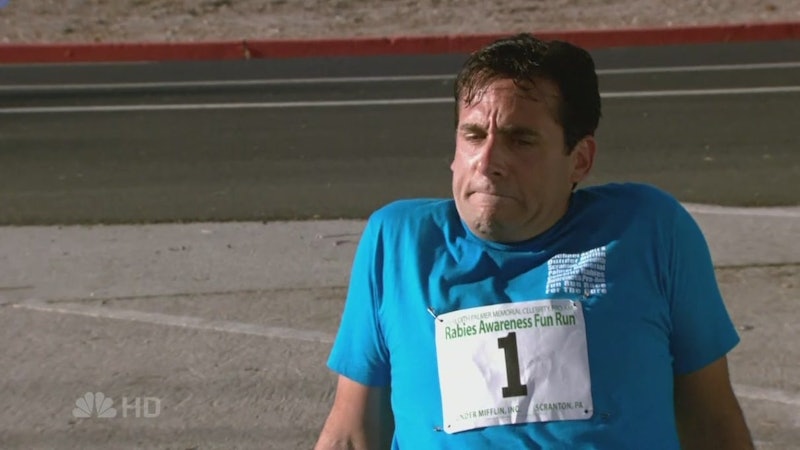 Running is my preferred form of exercise, in part because my father started forcing me to do it when I was a teenager, and also because I like being able to zone out to Carly Rae Jepsen for an hour. But I have shied away from marathons, both because I don't like making running competitive, and also because 26.2 miles sounds like a lot. Enter, then, this 0.5K run in Texas for "underachievers," which gives non-runners the chance to earn race bragging rights and promises to be a good time for folks who like short sprints and, uh, beer. Folks, you have seen inside my head.

As reported by PopSugar, the aforementioned 0.5K run will take place in Boerne, Texas on May 5. The "race" is for charity — it costs $25 to register, with that fee benefitting nonprofit organization Blessings in a Backpack, which feeds kids in elementary schools. And it is nowhere near as lengthy as, say, a half-marathon, a 10K, or a 5K. In fact, it's not even as long as the one-mile run I used to have to do in school as part of the Presidential Physical Fitness Test (I still have nightmares about the shuttle runs, and I do Pilates twice a week). 0.5K is the equivalent of about a third of a mile, which, in New York City, is about six blocks.

Indeed, the 0.5K run isn't about torturing your couch potato friends (i.e. me, a person basically fused to her couch) with photos of your medals and bleeding nipples. The organizers describe it as "a day (actually more like 10 minutes) of glory, celebration and participation trophies to raise money for a great organization," and a "very fun, tongue-in-cheek event that will lampoon the typical 5k." Most importantly, there's BEER—a local bar, the Dodging Duck, will give each participant a pint of beer pre-run, and post-run, the whole gang will head to local brewpub Cibolo Creek Brewery for yet another free pint of beer. This was essentially my workout plan in college, if you substitute two pints of beer for several shots of Everclear mixed with Tropicana.

The 0.5K run might sound silly, and it is certainly intended to poke fun at "real" races, which shower their participants with free gear that immediately goes up on Instagram. But it's also a nice way to include non-runners in an event often dominated by athletes. Not everyone can run a marathon, or even a 5K, and as ridiculous as a six-block run/stroll might sound, it means almost everyone gets to feel what it's like to cross a finish line. Plus, for an extra $25, organizers will provide a shuttle bus to take you to the end of the race, so even non-walkers can participate.

Some other fun facts about the race: there's a coffee/doughnut and designated smoking station about halfway through, should you need some extra jolt for your leisurely jog. Participants get to go home with a participation trophy, just like all the ones I racked up for sitting on the sidelines at JCC soccer games. You get a t-shirt. You get a "pretentious oval Euro-style 0.5k sticker that you can attach to your rear windshield to show everyone what a badass you are." And you get a photo at the finish line.

The very bad news is, if you've found all this enticing, you'll have to wait until next year. Organizers say the race filled up last week. "We are as surprised as you are — we really had no idea we would have this many people sign up," they wrote on their website. So many people love beer, and rest.