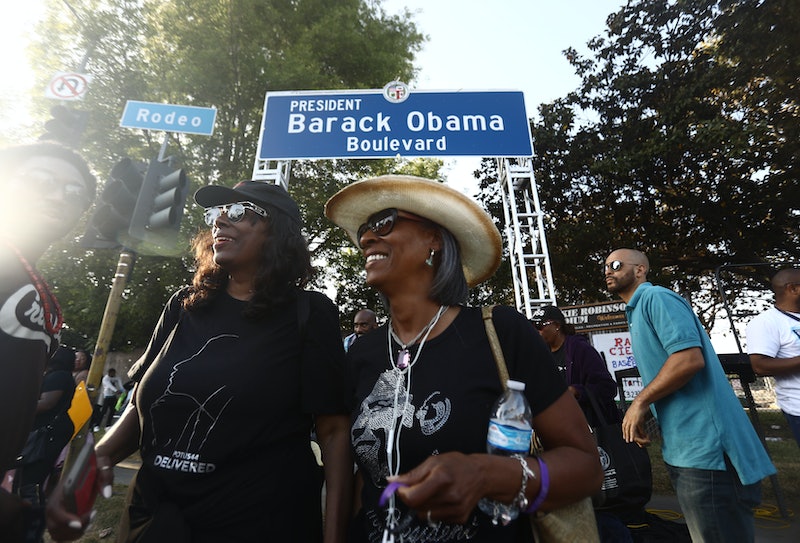 Move over Main Street, State Street take a seat. There's a new road in town — or at least its name is getting an update. Los Angeles renamed a street Barack Obama Boulevard to commemorate the former president, the Associated Press reported. Obama Boulevard, formerly called Rodeo Road, goes by the site of a 2007 Obama campaign rally and intersects with Martin Luther King Jr. Boulevard.

Los Angeles Mayor Eric Garcetti inaugurated the road on Saturday. "As we drive through this city and we see past presidents on Adams, on Washington, on Jefferson, now we'll have one that was in our lifetime, who was a president for everybody: Barack Hussein Obama," Garcetti told the crowd gathered, according to The Los Angeles Times.

The street is 3.5 miles long and not far from other presidential streets like Adams, Jefferson, and Washington boulevards, the AP reported. The part of LA it traverses was home to one of the city's first middle class black neighborhoods.

Some residents were there celebrating the opening, too. A young Black Lives Matter organizer who raised money through bake sales for Obama's 2007 campaign, Thandiwe Abdullah, said the street naming is important, The Times reported.

"A lot of people will say it’s just another street, but for me, being 15 years old, a black child looking up and seeing the name of the first black president in my own ’hood — that gives me hope," Abdullah said at the rally. "That gives me inspiration to step into my fullest purpose, and I know it does for so many others who look like me."

City Council President Herb Wesson has been pushing to rename the road since 2017, and the motion to do so eventually passed 15 to 0, CNN reported.

Wesson celebrated the move with a statement. "With this change, we are publicly documenting what Obama's legacy as our nation's first black President means to our city and our South Los Angeles community," Wesson said in the statement provided to the AP. "For every child who will drive down this street and see the President's name, this will serve as a physical reminder that no goal is out of reach and that no dream is too big."

Wesson also took to Twitter to celebrate. "It’s official - Rodeo Rd. is now #ObamaBlvd," he wrote. Speaking at the ceremony on Saturday, Wesson also said that the nearby Rancho Cienega Sports Complex would be renamed the Michelle and Barack Obama Sports Complex, The Los Angeles Times reported. That's where Obama had his 2007 rally.

Obama did not attend the renaming rally, but President and CEO of the L.A. Urban League Michael Lawson read a letter from him:

While Michelle, Malia, Sasha and I are so humbled by this day, we’re still mindful that this is not about us. This is about this neighborhood’s next generation and all we want for them. We hope they look at the new street signs and find inspiration in all that a group of committed citizens can achieve together.

Given the reaction of residents reported by The Times, the street's name will do just that.