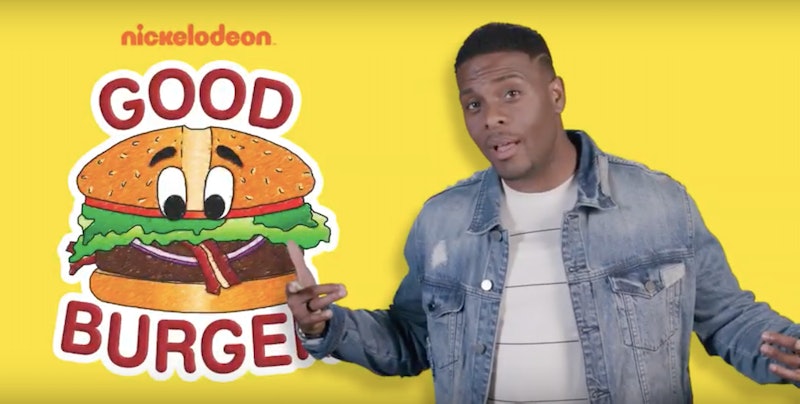 I'm a dude, he's a dude, she's a dude, and we're all dudes who will be able to enjoy one of those much-talked about Good Burgers very soon. Next month, Nickelodeon is opening a Good Burger pop-up in honor of the All That reboot. So, welcome to the Good Burger pop-up, home of the good burger that let's assume is best with a side of fries and an orange soda.

On Thursday (June 13), Nickelodeon shared the news of the pop-up with a little help from original All That star Kel Mitchell. In the announcement video, Mitchell is not looking to take your order, but to fill fans in on what they should expect from this fast food pop-up, which is a "good way to celebrate" the return of All That on June 15.

The Good Burger pop-up will officially open July 10 in West Hollywood and will have your Good Burgers, your Good Chunks, and your Good Shakes. According to Nickelodeon's press release obtained by Bustle, it'll also have “Good Burger-themed service experiences, merchandise, games, secret sauce and more" for those fans who want to get the full Kenan & Kel experience. Don't worry, Nickelodeon also confirmed that Ed's Special Sauce will definitely be available with your order at this Instagram worthy pop-up. Seriously, dudes, pics or it didn't happen.

Another sign this fast food joint is going to be an epic experience? The Good Burger pop-up is from the same team that brought fans The Max pop-up in honor of Saved By The Bell back in 2016. To reserve a spot, fans need to head to goodburgerpopup.com on Monday, June 17, at 10 a.m. PST to claim their reservation for this limited time attraction that will be running until the end of this year. Mitchell swears it's going to be a good time. Get it, good time?

The new All That reboot, executive produced by Mitchell and Kenan Thompson, features a brand new cast of seven young comedians ranging in age from 12 to 15. But, this new iteration of the sketch show will also feature All That OGs like Thompson, Mitchell, Josh Server, and Lori Beth Denberg, who will be reprising her “Loud Librarian” character, as well as bringing back the always vital “Vital Information” segment. Not to mention, the All That premiere will feature a performance from the Jonas Brothers, who are also making their comeback.

Now that All That is officially back, everyone wants to know whether there will be a Good Burger sequel in the future. In a recent interview with Complex, both Thompson and Mitchell gave a resounding yes to the idea of another Good Burger. "People keep asking, we already said we're in," Thompson said before noting, it's unfortunately not up to them. They need others above their pay grade like the studio to get on board with the project.

For right now, the closest fans will get to a Good Burger sequel is this upcoming pop-up. So, let them take your order so you can get all those nostalgic feels you've been hoping for.