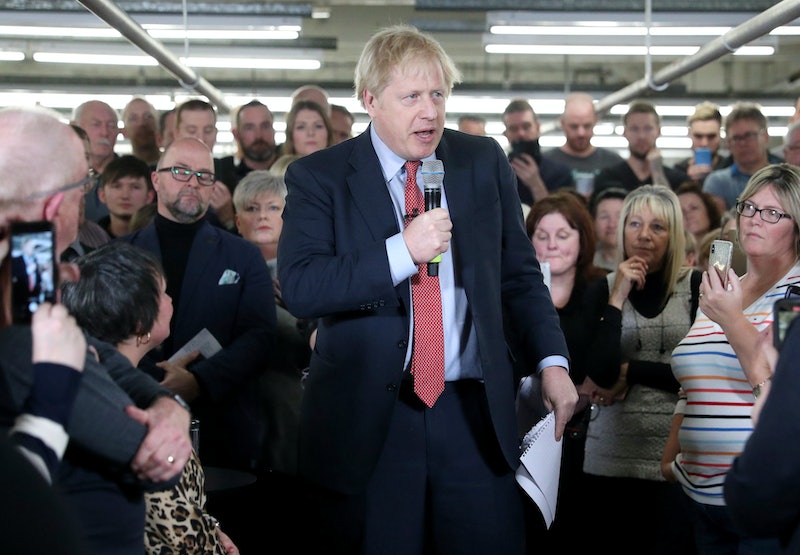 Channel 4 News has apologised after tweeting a subtitled video of Boris Johnson that read, "I am in favour of having people of colour come to this country but I think we should have it democratically controlled." The broadcaster later tweeted to state it had misheard and the Prime Minister had said "people of talent", not "people of colour".

Johnson made the immigration-related comment in Derbyshire on Thursday, per HuffPost. But despite the apology and the subtitled video being taken down, a huge debate is now raging on Twitter. Some are convinced Johnson said "people of colour", while others believe "people of talent" was the phrase.

Fatima Manji, correspondent for Channel 4 News, tweeted that she had just heard the clip played in the edit suite and that Johnson did say "people of talent". She added: "It sounded like 'colour' when played on the phone to multiple people this morning."

A few, however, are pointing out the racist nature of both terms. "'People of talent' is really not that much better than 'people of colour,'" tweeted one user. "Those 'unskilled migrants' who are denied entry are more often than not refugees, asylum seekers, those who speak imperfect English, and labour workers."

Politicians have also weighed in. Liberal Democrat MP Chuka Umunna tweeted a message to Channel 4, saying: "Why not let people see the clip and they can decide? Have you been threatened with consequences if you do not apologise?"

Umunna also tweeted the full clip, adding: "I have listened to it several times and I think it is clear what the Prime Minister said yesterday. Whatever he said, the idea that we need to 'get Brexit done' to have control of our immigration system, in order to 'democratically control' the number of people of colour coming to this country is absolutely outrageous."

Chairman of the Conservative Party James Cleverly hit back at Umunna, writing: "He said 'talent', and you know it ... I thought you were better than this." Cleverly also stated: "Boris has used the phrase 'people of talent' many times during this election campaign in relation to our points-based immigration policy." I have reached out to the Conservatives for comment.

The Independent recently published a list of things Johnson has said about people of colour, women, and LGBTQ people throughout his career. For example, in 2002, he described black people in the Telegraph as “piccaninnies” with “watermelon smiles” and, in 2018, likened Muslim women to "letter boxes" and "bank robbers".

During the Question Time leaders debate, the Prime Minister said he defends his right to speak out, per the Evening Standard. "If you go through all my articles with a fine tooth comb and take out individual phrases, there is no doubt you can find things that can be made to seem offensive," he commented.

Johnson added: “I have written many millions of words in my life as a journalist and I have genuinely never intended to cause hurt or pain to anybody."

More like this
Twitter Has *A Lot* To Say About The "Single Penalty”
By Sam Ramsden
Pret & Costa’s Coffee Is The Strongest On The High Street, According To Which?
By Sam Ramsden
This Is When Netflix Is Going To Start Charging You For Sharing Passwords
By Darshita Goyal
Rita Ora Finally Opened Up About Marrying Taika Waititi & Their "Perfect" Wedding
By Sophie McEvoy and Catharina Cheung
Get The Very Best Of Bustle/UK
Sign up for Bustle UK's twice-weekly newsletter, featuring the latest must-watch TV, moving personal stories, and expert advice on the hottest viral buys.