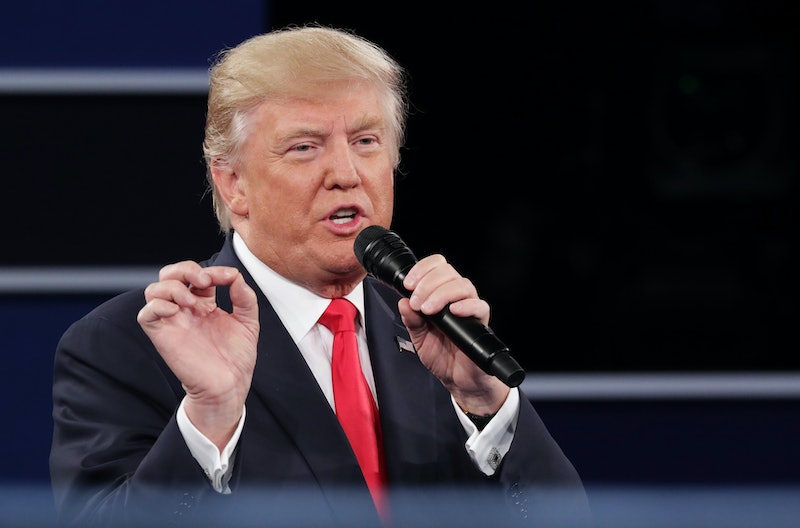 What's the first word that comes to mind when you think of the president? According to a new poll, there's a good chance the word you thought of wasn't complimentary. The three words most associated with President Donald Trump are "idiot," "incompetent," and "liar," according to a recently released Quinnipiac University poll. Ouch.

In a survey of 1,078 voters nationwide, Quinnipiac asked respondents to give "the first word that comes to mind when you think of Donald Trump." Topping the list with 39 respondents giving it as an answer was the word "idiot," followed by "incompetent" with 31 responses and then "liar" with 30. The fourth-most given word was "leader" with 25 respondents supplying it as their answer.

Other adjectives in list of the top-10 responses given by survey respondents include "unqualified," "president," "strong," "businessman," "ignorant," and "egotistical." Farther down on the list are the adjectives "bully," "successful," "great," "clown," "racist," "bigot," "con-man," "smart," and "evil" to name only a few.

While a Quinnipiac poll released April 19 found 57 percent of white voters with no college degree approved of Trump's job performance, the most recent survey found that number had dropped to 47 percent.

"There is no way to spin or sugarcoat these sagging numbers," Tim Malloy, assistant director of the Quinnipiac University Poll, said in a press release. "The erosion of white men, white voters without college degrees and independent voters, the declaration by voters that President Donald Trump's first 100 days were mainly a failure, and deepening concerns about Trump's honesty, intelligence, and level headedness are red flags that the administration simply can't brush away."

Further pointing toward an increasing deterioration in voter confidence, the Quinnipiac poll found 61 percent of respondents said they did not believe Trump to be honest, a three-percentage point increase from the 58 percent recorded in the April 19 poll. The latest poll also found the majority of respondents do not believe Trump has "good leadership skills," is "level headed," or "cares about average Americans." In fact, 53 percent of respondents said Trump made them feel "less safe," compared to just 24 percent who reported feeling "more safe."

But perhaps most painful number in Quinnipiac's latest poll is the 40 percent of voters who said they felt "the country would be in a better place than it is now" if Democratic nominee Hillary Clinton had won the presidential election instead of Trump. Just 30 percent said it would be in a "worse place."