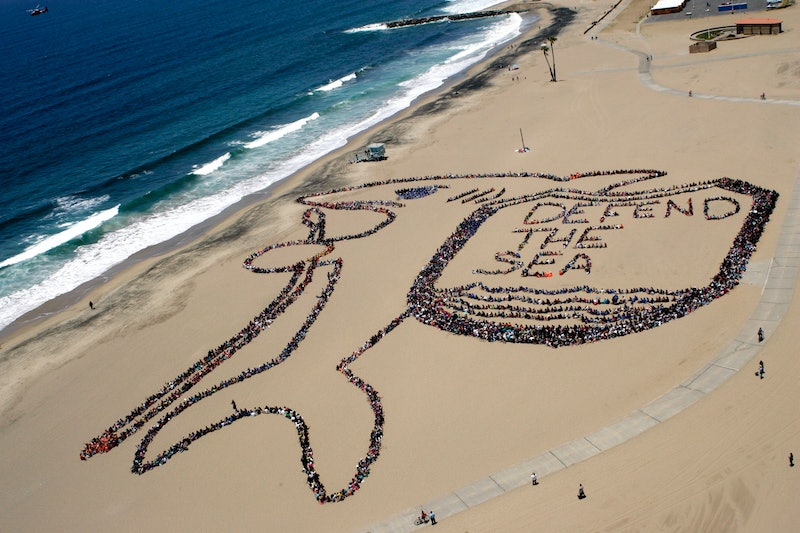 Here's a fun little fact from the United Nations: Apparently, if you're eating seafood, you're likely eating plastic, too. The United Nations Environment Program reported that there is now so much plastic in the world's oceans that it's making it's way into the food chain. Gross.

“Plastic pollution is surfing onto Indonesian beaches, settling onto the ocean floor at the North Pole, and rising through the food chain onto our dinner tables,” UNEP Executive Director Erik Solheim said in a news release.

Additionally, one in four of the fish sampled from fish markets in California and Indonesia had plastic or fibrous material in their guts, according to a study from the University of California, Davis, and Hasanuddin University in Indonesia. What's more is that the Huffington Post reported that if you eat a lot of shellfish you might be consuming 11,000 pieces of plastic a year.

This news makes the seafood dinner I've been looking forward to this week decidedly less appealing. In general, it takes a considerable amount of denial and looking the other way to eat almost any food grown or produced in the world today because of things like of factory farming, irresponsible production practices, and pesticides contaminating the soil. Who's hungry now?

How Plastic Became A Global Powerhouse

According to the BBC, modern-day synthetic plastic was invented in 1907, and by the 1930s it had become the height of glamor as most cutting-edge inventions often do. By 1948, plastic was in a slump, and in order to reignite plastic fever it mass marketed to the public in the form of tupperware. But, like many things in society, the long term ramifications of flooding the world with a synthetic material was not thought through.

The world now produces so much plastic that the a new study reported that a remote, uninhabited island is littered with more than 37 million pieces of trash derived from plastic.

"What’s happened on Henderson Island shows there’s no escaping plastic pollution even in the most distant parts of our oceans,” Jennifer Lavers, who co-authored a study published this week in the Proceedings of the National Academy of Sciences, said in a press release.

The press release noted that Henderson Island, part of the UK’s Pitcairn Islands territory, is so remote that it’s only visited every five to 10 years for research purposes. Despite no one living on it, the island has been found to be polluted with the highest density of plastic debris reported anywhere on the planet.

"Far from being the pristine ‘deserted island’ that people might imagine of such a remote place, Henderson Island is a shocking but typical example of how plastic debris is affecting the environment on a global scale," Lavers noted.

This is just what you see washing up on shore. The ocean is likely polluted with much more plastic, and it's making its way into the food chain and onto your dinner plate.

"Research has shown that more than 200 species are known to be at risk from eating plastic, and 55 percent of the world’s seabirds, including two species found on Henderson Island, are at risk from marine debris,” Lavers said in the press release.

One researcher even compared the ocean to a toilet, and I don't think very many of you would even consider eating from your toilet.

"The ocean is basically a toilet bowl for all of our chemical pollutants and waste in general," Chelsea Rochman, a postdoctoral researcher at the University of California, Davis, who authored a study published in Nature, Scientific Reports, told NPR. "Eventually, we start to see those contaminants high up in the food chain, in seafood and wildlife."

Because humans can't always be trusted to do the right thing, many states in the U.S. have laws surrounding plastic. In many cities in California single-use plastic bags are banned, and if you want a reusable plastic bag, or a paper bag, you have to buy it. While many people find this annoying, it forces you to be more responsible.

Unfortunately these laws are not the norm in the U.S, let alone the world over; and many underdeveloped countries lack modern-day waste management systems to halt the constant stream of plastic and other trash from flowing into the ocean.

If nothing else, writing this sure makes being vegan suddenly look a whole lot more attractive.