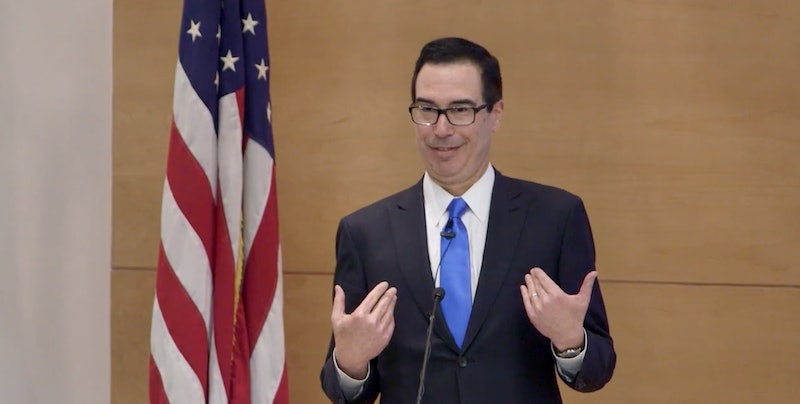 During a February appearance at UCLA to talk about the economy, controversial Treasury Secretary Steve Mnuchin was heckled, and video was just recently released. In it, you can see the hostile reaction to Mnuchin's presence — as well as the difficulty the treasury secretary had in ignoring the protestors.

The university originally kept the video from being uploaded online but relented on Friday, reportedly after receiving Mnuchin's permission. The Associated Press and other media organizations had filed public records requests to get access to the video.

University organizers clearly expected trouble from the get-go. Officials from UCLA asked that those in attendance raise their hands to ask questions and wait for a mic. "Please keep your questions short, pertinent, and to the point," Professor Kal Raustiala told the crowd. He's the director of the Ronald W. Burkle Center for International Relations, which organized the event.

Several protestors did not follow those orders. Three women yelled at Mnuchin when he started talking about sanctions, mentioning North Korea and how sanctions could be used to deter their development of nuclear weapons.

"What you're doing is bullying North Korea who is developing nuclear weapons for deterrence purposes, and this is what the U.S. does all over the world. You're talking about being a beacon for hope and democracy? That's bullshit," one of the women shouted at Mnuchin.

She continued on about Trump's tax cut bill. "We know that the tax bill and what that represents is sentencing people to death," the protestor yelled, noting that people would lose health care coverage as a result (the tax bill scrapped the individual mandate, which helps keep premiums down).

After she was forcibly removed from the room by UCLA police, the second protestor took over. "This tax bill is going after people who are vulnerable. This is political cruelty. ... This is part of an ethnic cleansing," the protestor said, arguing that the increase in deportations and decreases in social services primarily hurt minorities in poverty. "What's the money going to go to?"

After the second protestor was removed, the third got in a few lines, among them, "Trump and Pence must go."

These outbursts came after minutes of hissing that began as soon as Mnuchin was mentioned by name. The dean that introduced him mentioned that he "is a financier in his DNA," which led to more hissing. As his resume was introduced, the hissing increased at several points including the mention that he was the "architect of the president's economic policy" and "historic reform of tax policy." Nothing beat the hissing, though, at the mention that he was the finance chairman of Trump's campaign for president.

When Mnuchin took the mic, he addressed protestors directly. "Let me first say that the only part of this that you wanted to hiss was my going to Yale," Mnuchin said, trying to make light of the situation. "That is completely understandable."

But it didn't stop. He acknowledged he had never spoken at a university before. "I usually go to speak to people who want to listen to me speak," he added. "You guys get to hiss at me. I don’t get to hiss at you."

From there he moved to demean students for not having paychecks, disregarding those who may have second jobs or do work study. He was interrupted talking about the tax cut bill when he lashed out. "Hissing — well, you guys are obviously not getting paychecks yet," Mnuchin said, "because if you were getting paychecks in February when your withholding went down, you got tax cuts, you wouldn't be hissing."

At other times, the hisses didn't seem to be for a specific reason. Mnuchin was hissed after speaking about creating a "positive impact on communities" across the country with "opportunity zones." Mnuchin then asked why the hisser didn't like opportunity zones.

"You're full of sh*t," the heckler responded. Some clapped, others booed. "Why are you here then?" Mnuchin asked. "If you think I have nothing to share, maybe you should just leave."