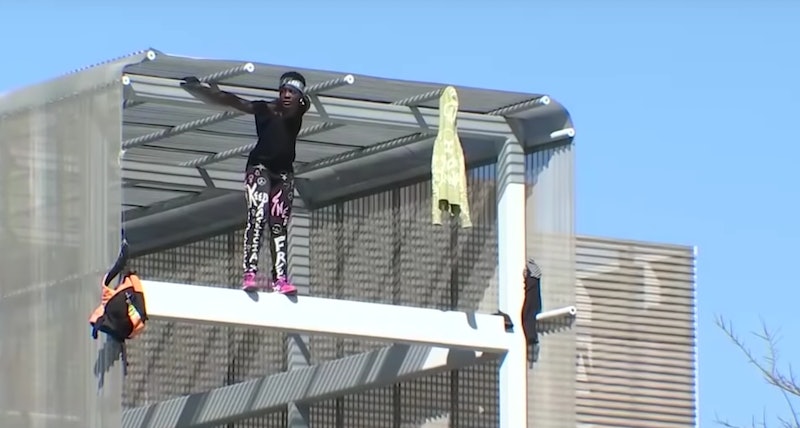 Last summer, activist Therese Patricia Okoumou climbed the base of the Statue of Liberty to protest the separation of migrant children from their families. In connection with this climb, Okoumou was found guilty on a few different federal charges, but she continued to protest the Trump administration's immigration policies. On Wednesday, in order to protest the detention of migrant children, Okoumou climbed the headquarters of Southwest Key, a detention center organization based in Austin, Texas.

According to Jezebel, Okoumou will be sentenced on March 5 for charges pertaining to her Statue of Liberty climb. In December, she was found guilty on charges of trespassing, disorderly conduct, and interfering with government agency functions. These charges could result in an 18-month sentence, per The Guardian. But this week, Okoumou went on to climb the headquarters of nonprofit organization Southwest Key, which operates 24 detention centers across Arizona, California, and Texas.

Southwest Key's centers are specifically designed to detain undocumented migrant children, The New York Times reported in December. Southwest Key has received $1.7 billion in federal grants in the past decade, but allegedly has "a record of sloppy management and possible financial improprieties," According to The Times.

In order to protest both Southwest Key and the Trump administration's child detention policies, Okoumou reportedly stood on a 3-foot beam at the top of Southwest Key's headquarters for eight hours on Wednesday, per CBS Austin, after which she was taken to a hospital. She came down of her own accord, CBS reported, and it is unclear whether or not she will be charged.

Following Okoumou's protest on Wednesday, Southwest Key COO Joella Brooks released a statement arguing that Okoumou and other activists did not "understand the mission" of the organization.

"For the last 30 years, Southwest Key Programs has been about taking care of children and their families in the juvenile justice system, unaccompanied minors as well as educating children across the country," Brooks stated, per CBS Austin.

However, Southwest Key has faced multiple abuse allegations in the past year, according to The New York Times, and reportedly failed to submit proof of Arizona employees' background checks by the deadline.

Louis Moncivias, an Austin activist, told CBS that Okoumou had been preparing for this climb for more than two weeks. Last year, Okoumou also climbed the Eiffel Tower, where she unfurled a banner that read, "Abolish ICE" and "#ReturnTheChildren," as well as a Border Patrol museum in El Paso.

At a Manhattan federal court in December, Judge Gabriel Gorenstein convicted Okoumou on three different charges. However, Okoumou pleaded not guilty at the time, and prior to that — following her Statue of Liberty protest in July — she made it clear that she would continue fighting the current administration's immigration policies.

“Trump has wrecked this country apart," Okoumou said last summer. "It is depressing, it is outrageous. I can say a lot of things about this monster, but I will stop at this: His draconian zero-tolerance policy on immigration has to go. In a democracy, we do not put children in cages. Period.”

At her court appearance in December, Okoumou reiterated this point, noting that her "moral values cause me to do something" to protest child detention.

“I wanted to send a strong statement that children do not belong in cages," Okoumou said about her Statue of Liberty climb, per Jezebel.