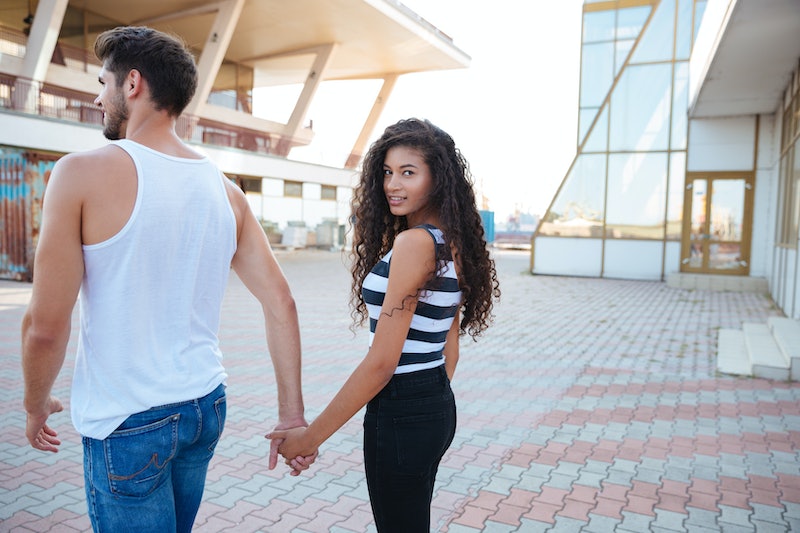 The secret to a happy relationship? Well, the answer may be as simple as location, location, location. Or at least, which state you live in. Researchers from University of Illinois at Chicago studied survey data of 127,070 adults to see the quality of relationships in each state. They looked at issues like attachment anxiety (aka being clingy and insecure in your relationship) and attachment avoidance (aka being reserved and distant in your relationship). Anxieties in a relationship can really affect its foundations, so it makes sense to use it as an indicator. It can come in a lot of different forms, but the idea that your partner might leave you at any given point is a big one.

“Separation anxiety, or the worry that your partner is going to leave you when he or she gets angry with you — fear of abandonment — is one of the most common causes of anxiety in relationships,” Dr. Fran Walfish, Beverly Hills child, parenting, and relationship psychotherapist tells Bustle. “Anxiety is one of the bad habits that interferes in relationships.”

Using the surveys, researchers discovered which states had the happiest relationships. So if you're curious as to what relationships look like in other parts of the country, this might give you a clue. Interestingly, there were some groupings. For example, states in the Pacific Northwest performed generally best. The worst? Sorry, North Dakota. You are high on anxiety and low on relationship quality. (For the record, South Dakota didn't fare much better — it came in at 47th).

The researchers noticed how some states (though, importantly, not all) lived up to their stereotypes. "When I think of New York, I think of the anxious Woody Allen type, and New York had one of the highest scores for attachment anxiety," William Chopik, one of the researches, explained in a press release. "California, on the other hand, seems like a romantic place with beautiful sunsets, oceans, and warm weather. And Utah residents are known to be very nice, warm and generous, which many people attribute to the large Mormon population." And, sure enough, both Utah and California made the top 10, whereas New York was decidedly low.

Here's a look at the top ten, though you can check out the whole list to see where your state fell:

Maybe it's the Mormon factor that leads to commitment or maybe it's just the flat open land, but they're nailing relationship happiness either way.

No surprise here, if I lived in the home of cheese I'd be happy all the time too.

The home of Ben and Jerry's — and love.

They may be frozen, but their hearts aren't.

North Carolina beat its twin, South Carolina, to make it on to the top 10 list.

The first thing I've ever learned about Delaware is that it came in number seven on this list.

It may border the unhappy Dakotas, but Minnesota is doing way better than its neighbors.

All of those who didn't die of dysentery fell in love, apparently.

It's just too sunny to be sad out there.

I'm not saying you should hop on a plane based off of where relationships are supposed to be happiest in their relationships, but it's definitely interesting information. And a good reminder that your attachment levels — and how secure you are with your partner — can really control how happy you are in a relationship, so keep an eye on it.