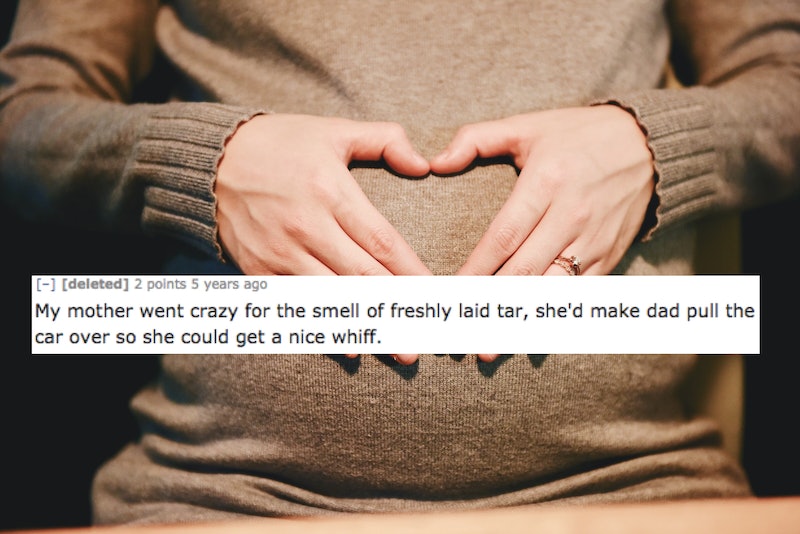 Pregnant women: not only are they eating for two, but the normal menu doesn't suffice. One must not bat an eye when they see a pregnant woman chomping down on pickles and ice cream — although, if we're being honest, the weirdest pregnancy cravings women have ever had get a whole lot stranger than that, according to Reddit.

One brave man posted asking for help in understanding pregnancy cravings women experience, encouraging people to share the weirdest they've ever had or heard of. And things do get weird — as in, women eating things that aren't even traditionally edible.

Where do these bizarre cravings come from, anyway? Much research agrees that it's largely thanks to hormones, which would make sense, since hormones change so much during pregnancy. Then there's the substance known as Neuropeptide Y (NPY), one of the most powerful appetite stimulants science knows of. Research has found that the synthesis of NPY increases during pregnancy; this could explain the increase in appetite and also in cravings.

Furthermore, cravings are fueled even more by the abnormal taste and smell perception associated with pregnancy — plus aversion to specific foods that women may have previously liked (or vice versa — loving foods you previously hated).

Research also suggests that cravings depend largely on your own culture; in other words, you're likeliest to crave something that people in your culture typically eat. For women in the United States, this means the most common pregnancy cravings are for dairy and sweet foods, like chocolate and fruit. And despite the seemingly common craving for pickles and ice cream, expectant women crave salty food less frequently.

Knowing all of this, it would seem, then, that the sky is the limit when it comes to odd pregnancy cravings. Let's see just how odd it really gets.