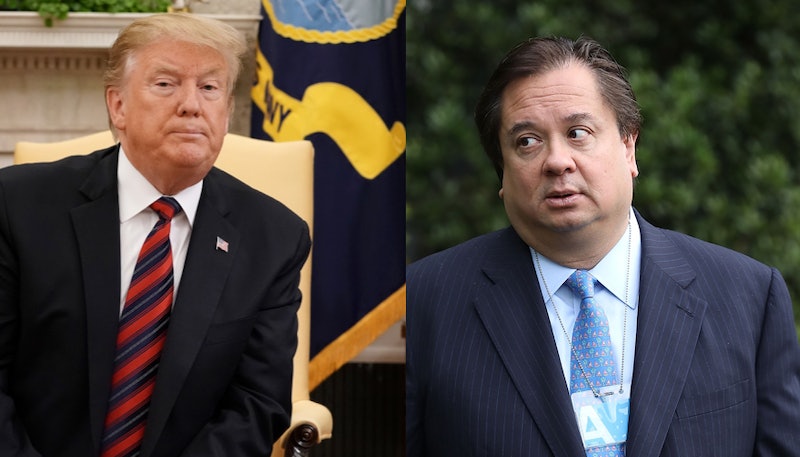 If you have a Twitter account, there's a pretty good chance that you've come across Kellyanne Conway's husband and his extremely active feed, if only because of how popular his online presence has become. The lawyer has established a reputation for criticizing POTUS in myriad ways, from coming up with hashtags to writing op-eds about the administration. In fact, George Conway's tweets about Trump make up a good portion of his Twitter feed — that is, in addition to the occasional Corgi appreciation post.

Conway's public relationship with the Trump administration began about two years ago, in the form of a rejection. In March 2017, Conway released a public statement confirming that he'd been considered for a Justice Department position, but that he'd turned it down. He said, per CNN,

I am profoundly grateful to the President and to the attorney general for selecting me to serve in the Department of Justice. I have reluctantly concluded, however, that, for me and my family, this is not the right time for me to leave the private sector and take on a new role in the federal government...Kellyanne and I continue to support the President and his administration, and I look forward to doing so in whatever way I can from outside the government.

Since then, it's safe to say that Conway's communications with the president, and with the Trump administration in general, have become a little bit more pointed. Here are some of the best roasts that Conway has delivered to POTUS over the years:

More like this
Twitter Is Very Torn About The Winner Of 'Dancing With The Stars' Season 31
By Jake Viswanath
What Does “The Rizz” Mean On TikTok? The Viral Slang Term, Explained
By Alexis Morillo
The 10 Memes That Defined 2022
By Alexis Morillo
This AI Filter Shows How You’d Look In Different Time Periods
By Alexis Morillo
Get Even More From Bustle — Sign Up For The Newsletter