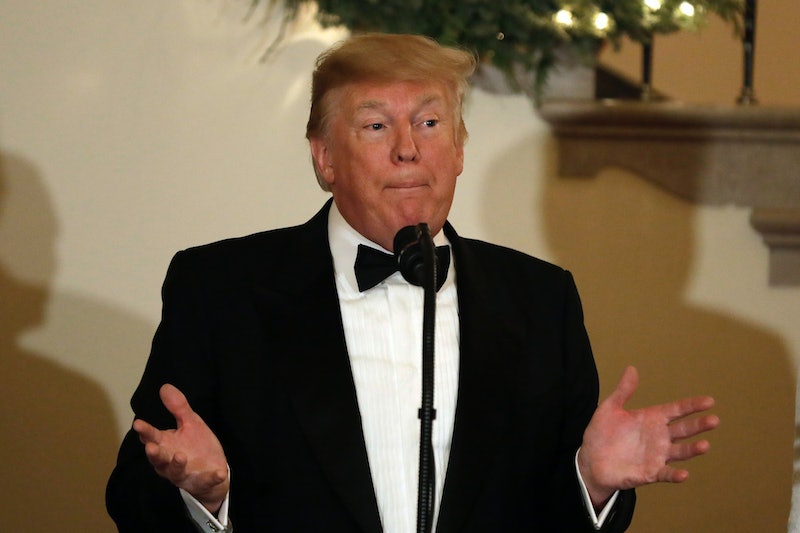 One of the patterns to have come out during the Donald Trump administration is the recurring theme of looming government shutdowns over one policy or another. Currently, a budget dispute over funding for Trump's border wall could force a partial shutdown just before the Christmas holiday — and news updates about the 2018 government shutdown haven't yet shown much progress on either side of the aisle.

The Trump administration hasn't backed down from its claim that getting congressional funding for Trump's promised wall on the southern border would be worth a partial government shutdown, as White House advisor Stephen Miller said on Face the Nation on Sunday.

“We’re going to do whatever is necessary to build the border wall," Miller said on Face the Nation. He said that the administration would "absolutely" be willing to shut down the government over the wall. The spending legislation needs Democratic votes to pass, however, and Democrats have universally been staunch in their commitment to blocking the $5 billion in funding that Trump has requested for the wall, as CNN wrote.

Trump, Senate minority leader Chuck Schumer told Meet the Press, is "not going to get the wall in any form."

"President Trump should understand there are not the votes for the wall in the House or the Senate," Schumer said on Meet the Press.

It's not just a lack of Democratic votes that's standing in the way of Trump's wall, however. As The New York Times reported, Republican leaders in Congress are also having trouble corralling the members of their own party — not necessarily because they disagree with what's in the spending legislation, but rather because the lame-duck Republicans in the House haven't been showing up for votes. That includes both the 28 Republican representatives who are retiring and the 21 Republican representatives who lost their seats in the 2018 midterms to Democratic challengers.

Even without this issue, though, Time wrote that there are still numerous Republicans who oppose the wall funding — even though Trump previously said that he would be "proud" to shut down the government for the sake of the wall. And unlike the president, congressional Republicans would rather come up with a solution than create another government shutdown, according to CNN.

“A short-term resolution is in order, something that would allow the next Congress to actually come in and negotiate a much larger, longer agreement,” California GOP Rep. Jeff Denham told CNN.

When Schumer and House minority leader Nancy Pelosi met with Trump last week, they presented two proposals, neither of which involved wall funding, as CNBC wrote. There are other proposals on the table, though, including one from Sen. Susan Collins, which would put $2.5 billion towards improving border security but not include funding for the wall, according to Time.

In his appearance on Meet the Press, Schumer didn't comment on any of the other Republican proposals that had come up. Instead, he suggested that his Republican colleagues should “should join us in one of these two proposals, which would get more than enough votes passed and avoid a shutdown.”

“Then, if the president wants to debate the wall next year, he can," Schumer continued. "I don’t think he’ll get it. But he shouldn’t use innocent workers as hostage for his temper tantrum.”