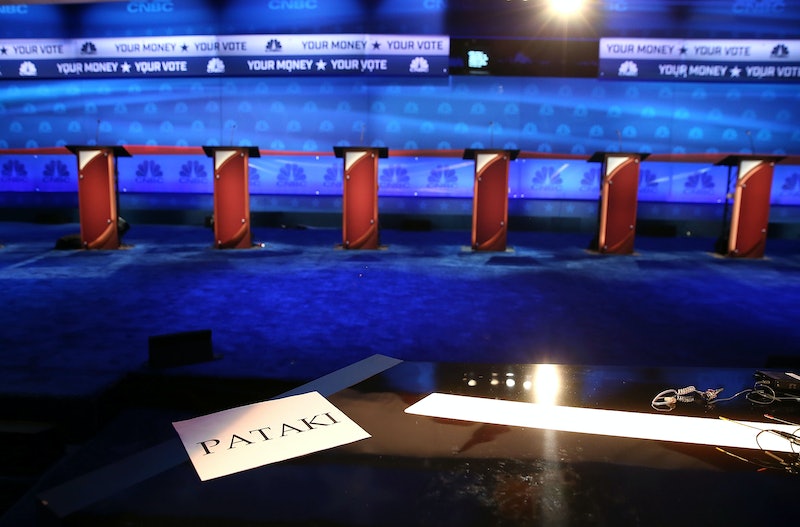 2020 is coming, slowly but surely, and that means debates are on the horizon. According to MarketWatch, the 2020 Democratic primary debate qualifications include two very different measurements of popularity that'll determine which candidates make it to the first pair of debate stages in June. And since the Democratic campaign trail is looking to be incredibly crowded, it seems like a given that the primaries will be a competitive hotbed.

A candidate must meet at least one of these two qualifications in order to secure a spot in the first two Democratic primary debates, come June: reaching at least 1 percent support in three or more national or early primary state polls, or collecting campaign donations from at least 65,000 individuals, with over 200 donors in over 20 states.

Once the event actually takes place, MarketWatch reports that candidates will be assigned to their various stages by a random drawing. This reflects an effort to ensure that there's no appearance of "first" or "second" tier stages, Democratic National Committee Chairman Tom Perez explained in a statement via The Washington Post:

I am committed to running an open and transparent primary process. To that end, we’ve spent months working with media partners to provide this unprecedented opportunity for candidates and voters to get to know each other.

What's more, the option to measure a candidate's popularity by campaign donations (rather than by polling alone) reflects another effort the party has made to encourage small-donor fundraising, The Washington Post reports. Per the publication, party leaders have confirmed they will cap the debate limit at 20 candidates. For now, these qualifications only appear to apply to the first two debates in June and July.

According to CNN, the Democratic National Committee has split the June and July debates between multiple networks: NBC, MSNBC, and Telemundo will co-host the June debate, and CNN will host the July debate. Each of those two debates will be two nights long, the network reports. There will be a break in August in which no debate takes place, and then another 10 debates will take place through the fall and into 2020, per CNN.

Even though it might feel like the 2020 presidential campaign trail is firing on all cylinders, it's important to keep in mind that June is several months away, and that it only represents the first of a dozen debates that will take place over the next year and a half.

As The Washington Post notes, at this time leading up to the 2016 election, Jeb Bush was a strong front-runner in the Republican race — and everyone knows how that one ended.

So feel free to be as involved or not involved in the monitoring of early polling and predictions. After all, there's still a long way to go before the race reaches the finish line, aka Election Day 2020.