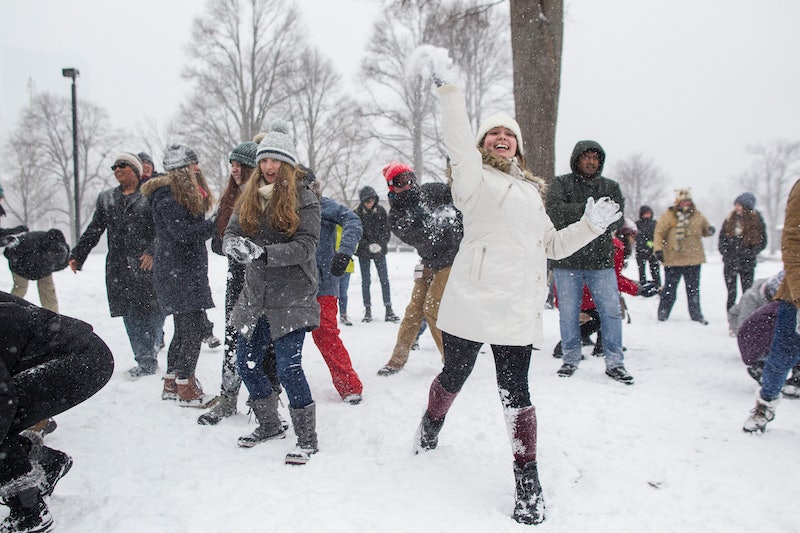 It may be mid-March, but what may be the Northeast's biggest winter storm of the season is set to hit New England and the Mid-Atlantic states and could bring over a foot of to some areas. Meteorologists and city emergency preparedness departments are predicting that the nor'easter, named Winter Storm Stella, will cripple cities in the Northeast and may cause downed power lines and hundreds of cancelled flights. And while the storm set to arrive March 14 may prevent people from traveling and going to work and school, it can't stop the Internet's legion of meme makers.

Memes and jokes about the storm have been circulating since the weekend, and #blizzard2017 and #snowmageddon2017 are trending on Twitter. Folks are also using #StellaBlizzard and #Stella to share their quips, gripes, and wisecracks about the storm. If Stella is headed your way, be sure to take some time to prepare for being snowed in and possibly losing power. But perhaps just as important is don't forget the value of having a laugh. You can't fight Mother Nature, so why not make memes about her and her power instead? Here are some of the Internet's best Winter Storm Stella memes to keep your spirits up while the snow falls. And falls. And falls.

I Can't Put My Arms Down

A Bottle Or A Case?

Just Waiting For It

Our Complicated Relationship With Meteorologists

Some People Had Plans

Some Folks Are Just Gonna Enjoy It

Business Insider reports that Winter Storm Stella could be New York City's biggest snowstorm in March since 1888 and the fifth to ever drop a foot of snow in Manhattan in March. Several school districts on the East Coast are planning to close, including the Philadelphia School District and NYC Public Schools. CNN reports that airlines have already canceled thousands of flights in anticipation of the storm. People in affected areas are encouraged to avoid driving during the storm and delay travel plans until after the storm has passed.

The storm is the result of a low pressure system moving east across the Midwest colliding with one moving west from the southeast coast. The Midwest is also experiencing severe winter weather with over a foot having accumulated in Iowa and Minnesota. People in the Midwest and Northeast are advised to stay inside during the storm and stock up on necessary items ahead of time, such as food, medication, and warm clothing.

More like this
What To Know About Martin Bashir After Watching 'The Crown'
By Bustle UK
The Best Memes & Tweets About Twitter’s Potential Shutdown
By Alexis Morillo
'Ackley Bridge's Cast & Fans Are All Saying The Same Thing About Its Cancellation
By Darshita Goyal
The 10 Best Winter Walking Shoes For Snow, Rain & Everything In Between
By Maria Cassano
Get Even More From Bustle — Sign Up For The Newsletter