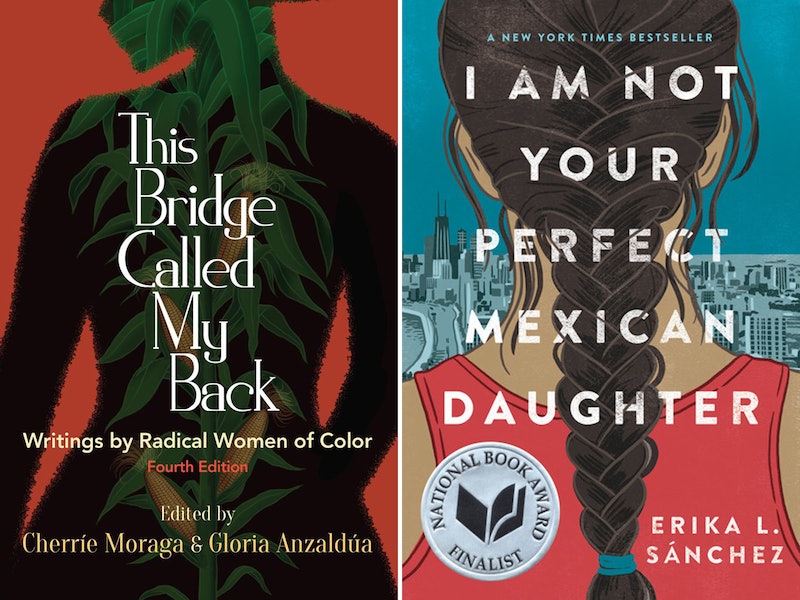 There are a number of objectively "good" pairings in the world. Peanut butter and chocolate. Tequila and lime. French fries and a Frosty from Wendy's (okay that last one may be a bit up for debate but if you think it's gross then you clearly just haven't tried it yet). When we stumble across an ideal match, a coupling in which one element enhances the other, it's indescribably satisfying, as if we've managed to unscramble the secret to the whole universe, if just for a few minutes. The same contentment can be found when we realize that two books - different authors, different genres, often different publishing dates - just go together. These five feminist book pairings will make you feel like a literary sommelier.

Now, it's important to note that not all of these books have been marketed as "feminist literature." But I think pushing past what major publishing houses deem "feminist" is important in actually sussing out what your personal feminist ideology is. There's more to feminism than simply, "equality between the genders," though that's obviously one of the pillars. There's the investigation of the ways economics, racial politics and geography play into the treatment of women and non-binary folks. There's the fighting against the gender binary in the first place. And there's the understanding and recognition of our own relative privileges in walking through the world.

Each of these book pairings work together because they help illuminate some corner in the other. And honestly, approaching feminism with a similar model in mind - that it's not a homogenous entity, that it's a deeply complex belief system that relies on the wealth and diversity of experiences - is not a bad idea.

Sometimes, we need to get lost in order to find the parts of ourselves - our resilience, our self-reliance, our independence - that we're discouraged from ever exploring. Cheryl Strayed's Wild, her now-classic memoir of solo hiking the Pacific Crest Trail, takes this idea to an exhausting, death-defying extreme. Rebecca Solnit's A Field Guide to Getting Lost, a collection of autobiographical essays, explores the smaller adventures we take through life, through cities, through suburbs, even through relationships. But both books shoulder the same questions: What do we use as a guide book? When do we know we're lost? When do we know we're found?

To be honest, Maxine Hong Kingston's The Woman Warrior, first published in 1976, is worth reading for the first 30 pages alone, a deeply haunting "talk-story" set deep within China. But it's in these "talk-stories," passed from mother to daughter, that Hong Kingston, who grew up in the intersection of Chinese, American, immigrant and girl in California, develops her own conception of self, and begins to understand what it means to be a Chinese-American woman.

On the opposite coast, several decades later, Jenny Zhang's world of Chinese-American girls fighting their way through New York City in the late '90s and early '00s takes on the same struggles - between mother and daughter, girl and peers, girl and, well, world. These characters are unapologetically messy and complicated and unwilling to bend to fit into the confines of stereotypes.

Ida B. Wells was a groundbreaking journalist and activist, fiercely fighting against the tide of lynching that flooded America post-Civil War, and her name, frankly, should be shouted from the rooftops in our history books. Melissa Harris-Perry is many ways a 21st-century Ida, an activist-journalist who refuses to be silenced by the larger powers that be.

Both Paula J. Giddings' biography of Wells, and Harris-Perry's media theory book, address the treatment of Black women by the American media, the ways they're belittled and discredited - and the women who fight with every ounce of strength to be heard and seen and read.

'Women Who Run With Wolves' by Dr. Clarissa Pinkola Estes & 'Their Eyes Were Watching God' by Zora Neale Hurston

Women Who Run With Wolves by Clarissa Pinkola Estes, $14.31, Amazon | Their Eyes Were Watching God by Zora Neale Huston, $10.70, Amazon

Both of these works are classics in their own right, and at their core explore the same premise: what happens when women refuse to follow the rules? Where did these rules come from in the first place? And what can we learn from these brave, "wild" women who strike out on their own?

Women Who Run With Wolves explores the "domesticating" of women, and how we can work to get back in touch with our innate magic. Their Eyes Were Watching God, the incredible 1930s novel set primarily in Florida, is a prime example of a woman who refused to be tamed, to give her life over to a man or to play within the lines of how Black women were expected to act. She lives alone, she survives alone - and she thrives.

'This Bridge Called My Back,' edited by Cherrie Moraga and Gloria Anzaldua & 'I Am Not Your Perfect Mexican Daughter' by Erika L. Sanchez

This Bridge Called My Back: Writings by Radical Women of Color by Cherrie Moraga and Gloria Anzaldúa, $23.96, Amazon | I Am Not Your Perfect Mexican Daughter by Erika L. Sánchez, $12.36, Amazon

It can be a deeply gratifying, affecting experience to oscillate between nonfiction essays, ideological theory, and fiction that all involve the same topic. You see the theory in practice, and witness the undertow of pure emotion. This Bridge Called My Back: Writings by Radical Women of Color is a seminal collection of feminist writing that explores, per editor Cherrie Moraga, "the complex confluence of identities — race, class, gender, and sexuality — systemic to women of color oppression and liberation.”

The 2017 YA novel, I Am Not Your Perfect Mexican Daughter, in which Julia, a teen in Chicago, must shoulder the responsibilities of the ideal Mexican-American daughter after her sister's unexpected death, explore further several topics from This Bridge Called My Back — the intersection of American and Mexican culture, the ways that tradition, stereotypes and racism work together to oppress generations of women — and seeks a way out.