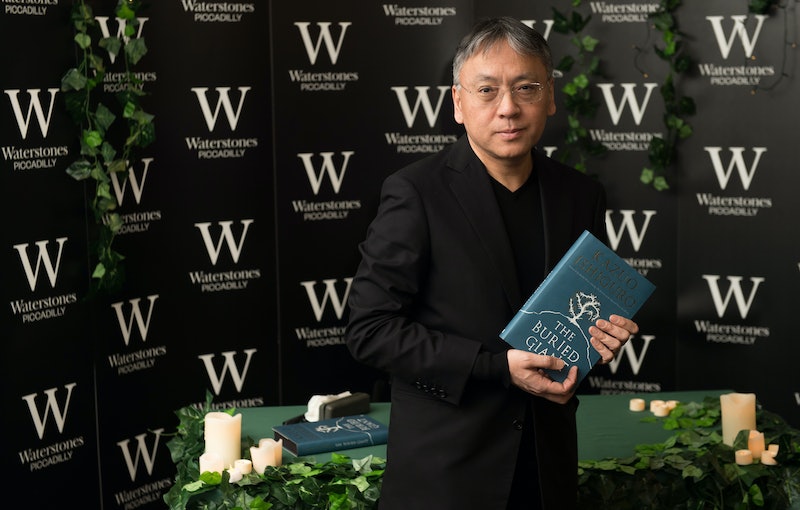 On Thursday morning, the Swedish Academy announced that Kazuo Ishiguro won the Nobel Prize for Literature for 2017. If you're unfamiliar with Ishiguro's work, take a look at the quotes below — all of which provide a small window into the work of the phenomenal author and can help you better understand how this visionary won one of the most coveted prizes in literature.

Born in Nagasaki, Japan, Ishiguro is a British novelist, screenwriter and short story writer best known for the novels Never Let Me Go, the Man Booker Prize-winning title The Remains of the Day, and his seventh and most recent book The Buried Giant.

The selection may come as quite a shock to readers who have long anticipated that Japanese author Haruki Murakami or American author Philip Roth would take home of the award. However, in the international community, Ishiguro's work has long been regarded as an extraordinary and enlightening writer of science fiction, whose characters are known for being complex, sympathetic, and relatably flawed.

The Swedish Academy said of Ishiguro's work: "...In novels of great emotional force, [he] has uncovered the abyss beneath our illusory sense of connection with the world," later adding, "If you mix Jane Austin with Franz Kafka, you have Kazuo Ishiguro. You have to add a bit of Marcel Proust in there too.”.

Nobel Laureate Kazuo Ishiguro will likely be much more present on bookshelves now that they've won the prestigious award, but you can start to get a feel for their voice and language with these quotes:

“I keep thinking about this river somewhere, with the water moving really fast. And these two people in the water, trying to hold onto each other, holding on as hard as they can, but in the end it's just too much. The current's too strong. They've got to let go, drift apart. That's how it is with us. It's a shame, Kath, because we've loved each other all our lives. But in the end, we can't stay together forever.”

“But then again I wonder if what we feel in our hearts today isn't like these raindrops still falling on us from the soaked leaves above, even though the sky itself long stopped raining. I'm wondering if without our memories, there's nothing for it but for our love to fade and die.”

“What is the point of worrying oneself too much about what one could or could not have done to control the course one's life took? Surely it is enough that the likes of you and I at least try to make our small contribution count for something true and worthy. And if some of us are prepared to sacrifice much in life in order to pursue such aspirations, surely that in itself, whatever the outcome, cause for pride and contentment.”

— The Remains of the Day

“…It’s hard to appreciate the beauty of a world when one doubts its very validity….But I’ve long since lost all such doubts, Ono,’ he continued. ‘When I am an old man, when I look back over my life and see I have devoted it to the task of capturing the unique beauty of that world, I believe I will be well satisfied. And no man will make me believe I’ve wasted my time.”

— An Artist of the Floating World

“All I know is that I've wasted all these years looking for something, a sort of trophy I'd get only if I really, really did enough to deserve it. But I don't want it anymore, I want something else now, something warm and sheltering, something I can turn to, regardless of what I do, regardless of who I become. Something that will just be there, always, like tomorrow's sky. That's what I want now, and I think it's what you should want too. But it will be too late soon. We'll become too set to change. If we don't take our chance now, another may never come for either of us.”

— When We Were Orphans

“As with a wound on one's own body, it is possible to develop an intimacy with the most disturbing of things”

— A Pale View of Hills

“I have this feeling that all it will take will be one moment, even a tiny moment, provided it’s the correct one. Like a cord suddenly snapping and a thick curtain dropping to the floor to reveal a whole new world, a world full of sunlight and warmth.”

Congrats to Kazuo Ishiguro, and happy reading to all his new (and old) fans!