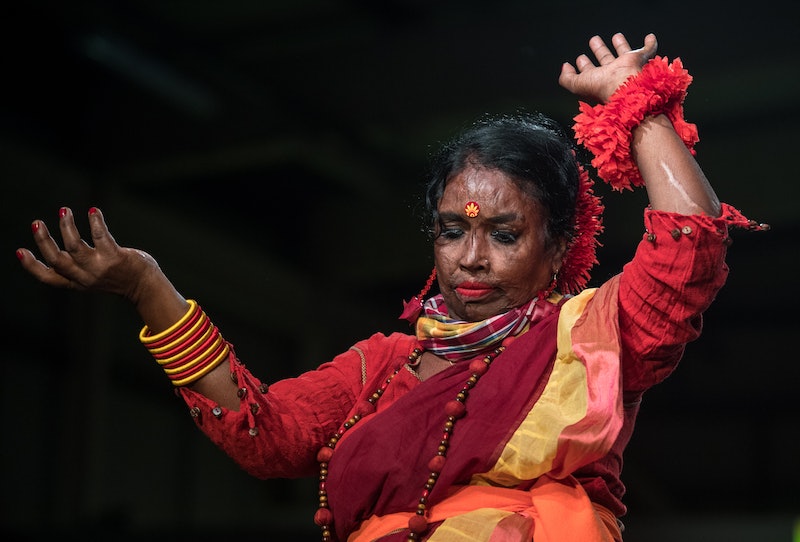 The best thing about fashion isn't just gorgeous garments. Fashion has the power to foster confidence, granting the ability to show the world who you really are through outward appearance. At the ActionAid UK's East London Fashion Show, the power of fashion was on full display. That's because survivors of acid attacks modeled in the show, reclaiming their beauty and proving their resilience.

The show was created to "break the culture of silence for all women and girls everywhere who live in fear of violence." The women, all who have survived the horrific form of gender-based violence, rocked the runway and opened up a needed conversation about violence against women at the same time.

The ActionAid UK show was different than your typical fashion show. Instead of highlighting the clothing, this was all about the women and their cause. As Refinery29 reports, eight Bangladeshi women travelled from their homes to London to walk the runway with ActionAid UK. The clothing was designed by Bangladeshi fashion designer Bibi Russell, but it was the women and their undeniably bravery that made the event incredibly powerful.

According to the UN, there were more than 2,950 acid attacks survivors living in Bangladesh as of 2009, the latest statistics available. The country has the highest rate of known acid attacks in the world. Survivors of acid attacks are often ostracized socially, discouraged from showing their faces in public after healing. The ActionAid UK Fashion Show challenged the stigma around acid burns, showing the beauty in these eight women.

According to the ActionAid UK website, the international nonprofit organization works with "over 15 million people in 45 countries for a world free from poverty and injustice." That includes aiding acid attack survivors in Bangladesh. Since ActionAid UK began working with the Bangladesh government, attacks have since declined from 400 to 100 a year, according to the organization. The decline is mostly due to policy changes that have made acid more difficult to obtain.

ccording to ActionAid UK, the eight women walking in the show had the entire audience up and dancing the entire time. But more than being a celebration of self, the event showed just how courageous these women are for challenging stigma.

“My involvement is a tribute to people who have experienced such terrible acts of violence,” said Russell in a Refinery29 interview. “I want to see them be respected, have equal rights and be included in society. Above all I want to see that their human dignity is restored… I have seen their sparkle and beauty and I want to help show this to the world.”

Those who walked in the show hoped that the night of bravery and celebration will help promote gender equity all around the globe, and give amplify their situations.

"After seeing this [the show], many people might be interested to help in treatment of survivors," said Sonali, a 15-year-old girl and youngest survivor in the show, in a PopSugar interview. "If I can change my life, then anyone can."

Besides simply education yourself on the topic of acid attacks, there are other ways that you can get involved in the fight to end the form of gender-based violence. Aside from donating to organizations that help to support survivors, you can also advocate for stricter requirements to obtain acid both in the U.S. and abroad. Everyone can also benefit from learning what to do if you are a witness of a violent attack.

While walking down a runway won't solve gendered violence around the globe, these women show what bravery and resilience looks like in action. And their power is unstoppable.

More like this
Google Wants You To Shop Black-Owned The Friday After Thanksgiving
By Dominique Norman
Kim Kardashian Fans Are Calling On Her To Condemn Balenciaga’s Latest Campaign
By El Hunt
The Best Heels For Bunions, According To A Podiatrist
By Margeaux Baulch Klein and Maria Cassano
Iran Has Issued A Death Sentence Over Mahsa Amini Protests
By Catharina Cheung, Darshita Goyal and Maxine Harrison
Get Even More From Bustle — Sign Up For The Newsletter