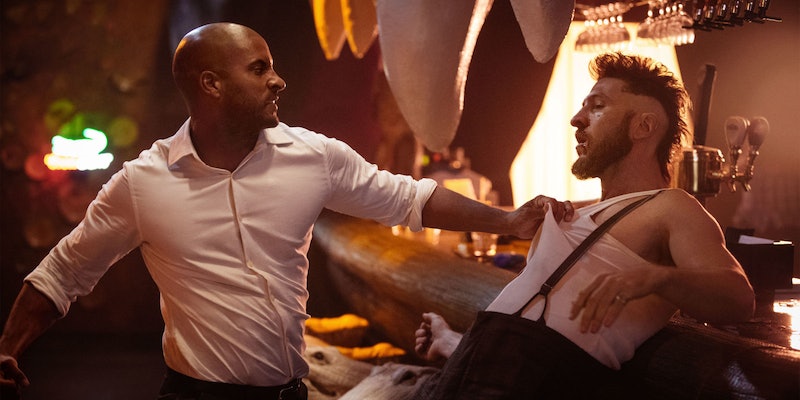 There is a war brewing between the old gods and the new gods in Starz's new series, and the unsuspecting ex-con Shadow — The 100's Ricky Whittle — is caught in the middle. Based on the novel of the same name by Neil Gaiman, American Gods is set to be TV's next big breakout hit, and thanks to its masterful showrunner, Bryan Fuller, the series is finding an unexpected way to show off its magic. While the official trailer was released way back in June, the American Gods Twitter feed features teasers full of hints about what lies ahead on this cross-country American road trip.

Shadow is employed by the mysterious Mr. Wednesday (played by Deadwood's Ian McShane) to chauffeur him across the U.S. to rally the old gods against the likes of Media and Technology. The first trailer for the show revealed the stunning visuals viewers will encounter as they join Shadow's adventure, but through the use of gifs, Starz has found a unique way to offer up a closer look at American Gods. I suspect Gillian Anderson's Media would be proud.

Each tweet features a witty caption alongside a scene introducing the show's many characters, or exploring the extensive world-building involved in the project. Whether it's Czernobog’s bloody hammer, or a glimpse at a high stakes game of checkers, each gif is a treasure trove of hints at what lies ahead.

Bilquis has a unique way of feasting, and this particular gift should give you an idea of what happens to her worshipers. Fans of the book should be assured the show is all in when it comes to portraying the old god's ways, as Vanity Fair confirmed in June.

Shadow has a gift for sleight of hand. Viewers would be wise to pay careful attention to any and all coins he comes in contact with over the course of Season 1.

She may look like a kindly old lady, but the Evening Star, or Zorya Vechernyaya, is a Slavic god with a love for a stiff drink, and the weight of the world on her shoulders. You can expect Shadow and Mr. Wednesday to share an interesting meal with her early in the series.

Technology is one of the new gods, and he has undergone a major upgrade from the book. Back in 2000, he was less rich boy tech-wizard, and more acne-ridden hacker. Seeing how real life technological advancements informed the changes to the character should be interesting.

Forget chess, Shadow's game of choice is checkers, and he shares a memorable game with the Slavic god Czernobog.

Faith is a central theme in American Gods, though not in the way you might expect. That only makes this short tease of Shadow and Mr. Wednesday's road trip all the more tantalizing.

Shadow Lives Up To His Name

Shadow's last name is Moon for good reason, and in this gif, he seems to be discovering his own gifts.

See, this is why you should probably let Czernobog win at checkers.

These gif teasers will just have to hold you over until American Gods premieres Sunday, April 30 on Starz. Keep the faith — Mr. Wednesday and Shadow will be here soon.

More like this
Nicola Coughlan Shared A Lady Whistledown Excerpt From ‘Bridgerton’ Season 3
By Grace Wehniainen, Alyssa Lapid and Sam Ramsden
'Inside Man' Was Inspired By 'Sherlock' In The Most Unexpected Way
By Catharina Cheung and Maxine Harrison
Ruth Wilson’s New Thriller Spotlights A Controversial Irish Institution
By Darshita Goyal
Stanley Tucci Is Next Level In The BBC's 'Inside Man' Trailer
By Sam Ramsden and Sophie McEvoy
Get Even More From Bustle — Sign Up For The Newsletter