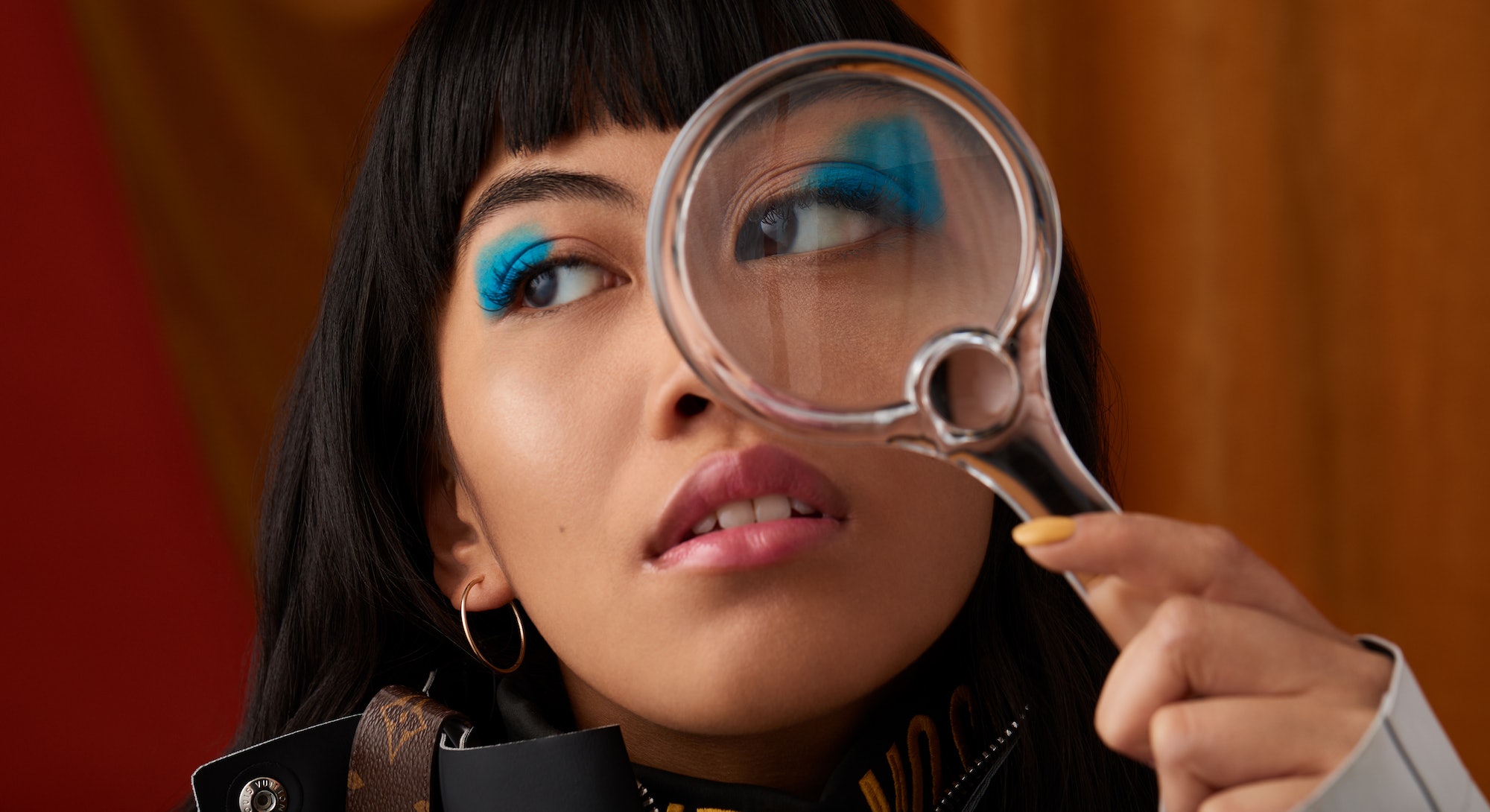 Jannel Varona hated smiling when she was a kid. It began when the now-fashion influencer, known as @StreetStyleTeller, was 9 years old and moved to the United States from the Philippines. It was during that time that her classmates at school would squint and pull their eyes apart at her to make fun of her almond-shaped eyes. Varona feared that smiling would make her eyes look even smaller, giving them more reason to make fun of her. "Growing up in America made me self-conscious about my eye shape and my whole being," she tells Bustle.

P.S. Kaguya, a plus size model, artist, and body advocate, had a very similar experience to Varona's. "I was bullied for the way I looked and [for] being the only Asian from pre-school to 12th grade in a small school in Florida," she shares. And while she did have a double eyelid — a characteristic prized by many Asians — she still never felt like she was as pretty as her non-Asian friends.

When they entered their teenage years, both Varona and P.S. Kaguya turned to makeup as a tool to feel more confident and more beautiful. But there were little to no eye makeup tutorials for Asian women on the pages of their favorite beauty magazines. In a time before there was YouTube or Google to turn to, the two were left to experiment with makeup on their own. "My only source for how to apply eyeshadow was on the back of an eyeshadow package. Even then, I still didn't get it right," says Varona.

While the beauty industry has come a long way in creating products that serve a more diverse demographic of makeup lovers, the tutorials that currently exist for Asian women still leave much to be desired. One quick Google search for "Asian eye makeup tutorials" will produce over 22 million results, but many of them aim to help women "contour," "lift," or "elongate" their eyes. These beauty tips encourage Asian women to mask their natural eye shape and instead make it look bigger, brighter, or more Western — in other words, "white."

But Varona and P.S. Kaguya don't want Asian women to do that. The two have built their massive social media followings on the basis of celebrating their uniqueness. While it has taken them years to learn to remove themselves from the boxes that their peers had once put them in, they've finally come to a place where they feel worthy and proud of just being themselves. Through fashion and beauty, they both have been able to express themselves however they want, says P.S. Kaguya. "You are living for you and not for anyone else," she adds. Varona echoes P.S. Kaguya's sentiments: "No matter how much American society will generalize and categorize you and pin you into one wall, know that how you look and what you are separates you from their opinions," she says. "No one else has your eyes. No one else has your nose. No one else has your complexion. No one else has your lips. No one out there looks like me. And no one out there looks like you, and that is powerful. Own your beauty!"

And through makeup, they've learned not to minimize their Asianness, but to embrace it instead. With the help of celebrity makeup artist and Dior Beauty ambassador Daniel Martin, we're celebrating the beauty of the natural Asian eye shape in a bold, loud, and unconventional way.

"This look made me realize I can go beyond my usual cat eye look and experiment outside of my makeup comfort zones and feel beautiful. I feel like a new member of the Spice Girls," says Varona.

"I like to play with makeup and colors, but I would probably have never thought to try this makeup look. It was very abstract, but could be good for a party," says P.S. Kaguya.

"This look, along with my outfit, made me feel runway ready," says Varona.

"I think that green and yellow eyeshadow underneath the eye is hard for anyone to rock and while this put me out of my comfort zone, I felt like I could serve this look," says P.S. Kaguya.

The next time you're deciding what eye makeup you want to rock, let these looks inspire you to ditch the crease-illusion tutorials and opt for a loud, graphic liner or a bold, colorful eyeshadow. Life's too short to pass on a pink cat eye.