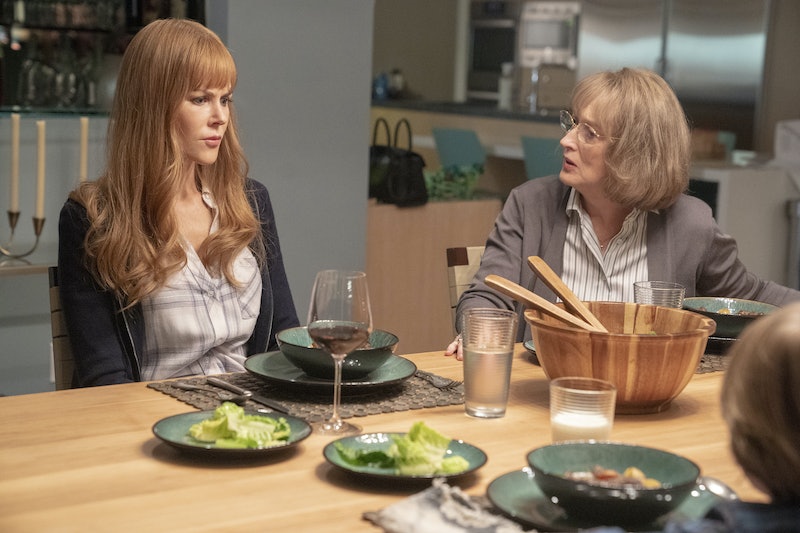 Big Little Lies was so succesful in its first season that HBO made the shocking decision to renew the show, even though it was intended to be a limited series. Fans were excited for more but skeptical about where things could go: it had finished the story from Liane Moriarty's novel, upon which it's based, so it would have to go back to the drawing board. But as Big Little Lies Season 2 details have slowly begun to crop up on the internet, much of that skepticism has been assuaged. And the cast and crew shared even more teasers during the show's panel at the 2019 Winter Television Critics Association press tour.

One of the biggest selling points for Season 2 is the addition of Meryl Streep as Mary Louis Wright, mother to the now-dead Perry Wright (Alexander Skarsgard). She revealed that, like the rest of us, she was the show's No. 1 fan — and that's exactly why she joined the project.

"I loved this show. I was addicted to it," Streep told reporters in attendance, including Bustle. "I thought it was an amazing exercise in what we know and what we don't know about people, about family, about friends, how it flirted with a mystery of things, what was unsaid, un-shown, unknown, the gravitational pull of the piece and it was so exciting. When I got the chance to join the crew I was like, 'Yeah, I wanted to be in that world.' The world they created was amazing."

While Streep is remaining tight-lipped about the dynamic between Mary Louise and her daughter-in-law Celeste (Nicole Kidman), who had a hand in killing Perry in the shocking Season 1 finale, Kidman did turn to Streep and say, "You love me."

"I do love you and I do love her," Streep agreed, then smiled. "And that's the only thing I'll tell you."

The decision to renew Big Little Lies for a second season was controversial, given that the original intention was to have Big Little Lies be one-and-done. Even the cast, including Kidman, Reese Witherspoon, Laura Dern, Shailene Woodley and Zoë Kravitz who were all gathered for the panel, believed that was the end of the series.

"We all said goodbye at the end, a big goodbye," Kidman said. "But we became very close and had such a good time doing it and the desire to spend more time together was a huge part of [bringing the show back]. But also there was an enormous demand from the audience. I had never been in something that reached so far globally and that was such a compelling idea in terms of putting something together again."

Creator, writer, and executive producer David E. Kelley was excited to explore how the "Monterey Five" dealt with the trauma of everything that came to light in the first season. "Going back to last season we didn't really close the chapter," he said. "It ended on a very open note. What's going to happen next? Will the lie have a life? There was a lot of fertile storytelling ground to be mined."

Kelley then smiled. "Everybody up here can get jobs," he said with a laugh. "We didn't want to do this unless we could at least have a fair shot of living up to the bar we felt we had all set in year one. We met, we talked about what the stories were and were very candid about what would work and what wouldn't and we didn't finally agree to set sail until we had the commitment from all of us that this was storytelling we were passionate about."

While the journalists gathered were treated to a quick glimpse at Season 2 footage, including the main women becoming known in the town as the mysterious "Monterey Five," a lot of frustrated screaming on the beach and Streep's Mary Louise going toe-to-toe with Witherspoon's Madeline Mackenzie, not much about the plot was revealed.

"We come back and their lives, like all of our lives, seem well put together on the surface but then the fissures and the cracks begin to emerge," Kelley teased about the cover-up of Perry's murder. "There's a big fault line underneath all of their lives that they share. Once the crevices start to widen, it escalates pretty quickly."

Later in the panel, Kelley also revealed that he didn't want to go too big with the story in Season 2. He was mostly concerned with playing out the emotional consequences of what happened in Season 1 instead of trying to top the insanity. "We don't so much as go broader as we go deeper," he said. "We drill down into how that lie is going to permeate the world of Monterey and the people who make up this franchise."

He then added, "Tonally it's still a mix of comedy and drama but probably more dramatic this year than last year." The absence of the "Greek chorus" in Season 2 also changes the tone of the show, according to Kelley.

The story that Witherspoon was most excited to explore deeper in Season 2 was that of Bonnie (played by Kravitz) after she pushed Perry over the ledge to his death. "It's fascinating to see how she was going to respond and how the actual event happened and how it affected her life," Witherspoon said. "We were lucky Liane Moriarty wrote almost like a novella for us to use like a template [for Season 2]. That gave us a basis for which to go on for each character. We all had unresolved issues."

But Kidman was quick to point out that not every issue is going to be neatly tied up in a bow by the end of Season 2. "I don't think it's answers more than it warrants following these women's lives," she said of the second season's story arc. "For Celeste, what is the aftermath of abuse when the partner is gone, in this case, dead? It doesn't mean you're healed."

But something to look forward to in Season 2 is how the lie about Perry's death will bring the Monterey Five closer together than ever before — even Madeline's former enemies Bonnie and Renata.

"And thrilling for Renata to have any friend," Dern quipped as the whole room erupted into laughter.

"It's so cute!" Witherspoon said, breaking into hysterical laughter. "Dern's character is so excited that she has girlfriends! She wants to hang out and drink wine. It's so awkward! She gives a lot of unsolicited advice."

But the question of the hour came at the very end of the panel: given HBO's track record with renewing Big Little Lies when no one expected it, are there any plans for a third season? "No such plan now," Kelley revealed. "I think that it's one and two and we like where our closure is at the end of Season 2 so it will probably be it."

"But you said that last time," Witherspoon smartly pointed out.

"I did say that last time," Kelley added. So while the jury is still out on whether or not we'll get a third season, at least we've still got seven more new episodes to go before potentially saying goodbye to Big Little Lies (again).

More like this
A Is Officially Coming Back To Wreak More Havoc In 'PLL: Original Sin' Season 2
By Kadin Burnett
The First Clip From Netflix’s Queen Charlotte ‘Bridgerton’ Prequel
By Bustle Editors
The ‘Emily In Paris’ Season 3 Release Date Is Here, Plus The First Footage
By Bustle Staff
'Killing Eve' & 'Doctor Who' Stars Just Joined The Cast Of 'True Detective' Season 4
By Brad Witter
Get Even More From Bustle — Sign Up For The Newsletter