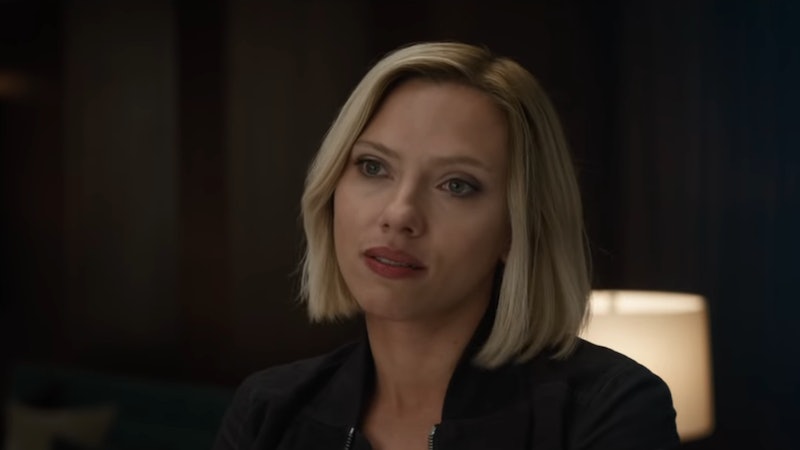 It has been an exciting week for Marvel Cinematic Universe fans. On July 20, Avengers: Endgame surpassed Avatar for the highest grossing film and Marvel Studios announced an upcoming Phase Four that includes the production of 10 new projects. Scarlett Johansson's solo Black Widow film is one of them, and she told Variety that she feels relieved that the secret is finally out. Although she can't go into too much detail, she can finally talk a little bit about what fans can expect from this highly anticipated movie.

"I feel like a weight has been lifted,” she told Variety, referring to the film's announcement. Phase Four was announced at San Diego's Comic-Con. Some of the Black Widow cast and crew — including Johansson, director Cate Shortland, Rachel Weisz, Florence Pugh, and David Harbour — flew in for the event and promptly flew back to London where filming is underway. "We do about seven pages of dialogue this week so maybe [Black Widow] is a little different than most Marvel movies," Johansson told the publication. "There's lots of talking. I get to talk more. I could tell you that."

According to Polygon, the film is set to release on May 1, 2020. The cast presented an exclusive trailer in Hall H at Comic-Con, despite only having 30 days of filming behind them. The footage reportedly included some intense battle scenes between the titular Black Widow and the antagonizing Taskmaster. So, even though there may be more dialogue, the Marvel-defining action that fans love is promised.

In the interview with Variety, Johansson explained why she's glad the movie is making its debut now, rather than 10 years ago when she first took on the iconic role. "I think I could have made the film 10 years ago but it would have been a very different film,” she said. “I think it probably would have been much more of a caricature of a person. I feel after living an extra 10 years and becoming a mother and you know, life and how it happens to you, I feel much more in myself and able to explore all the kind of things that make me uncomfortable and then just lay it out for you guys."

She described why and how her own personal vulnerability is important to the film's development, despite the fact that Black Widow is a fictional character. “It feels like I’m a stronger person by the fact that I have embraced my vulnerability,” she continued. “And I think that will make this version of the character really, hopefully, complex.” She also added that, "we’ll learn what she’s scared of.”

That vulnerability has been encouraged by the film's director, Shortland, who Johansson said has done incredible job of leading production so far. “Cate is the perfect director because she always goes back to dig for what is real, what is brutally real and honest and what the truth of each scene is,” she said. “And not only does she have an incredible visual vocabulary, which is obvious in her work, but she’s always searching for the uncomfortable, brutal truth, and that’s what we need for this film.”

It sounds like Black Widow is going to get deep. MCU stans, you have just under a year to prepare yourselves.

More like this
Kukulkan From 'Wakanda Forever' Has A Surprising Connection To Marvel History
By Grace Wehniainen
Anne Hathaway Shared A "Thrilling" 'Princess Diaries 3' Update
By Darshita Goyal
Rupert Grint Just Shared A *Major* Update About Ron Weasley’s Future
By El Hunt
Twitter Is Overjoyed By Angela Bassett’s Record-Making Oscar Nomination
By Maxine Harrison
Get Even More From Bustle — Sign Up For The Newsletter
From hair trends to relationship advice, our daily newsletter has everything you need to sound like a person who’s on TikTok, even if you aren’t.