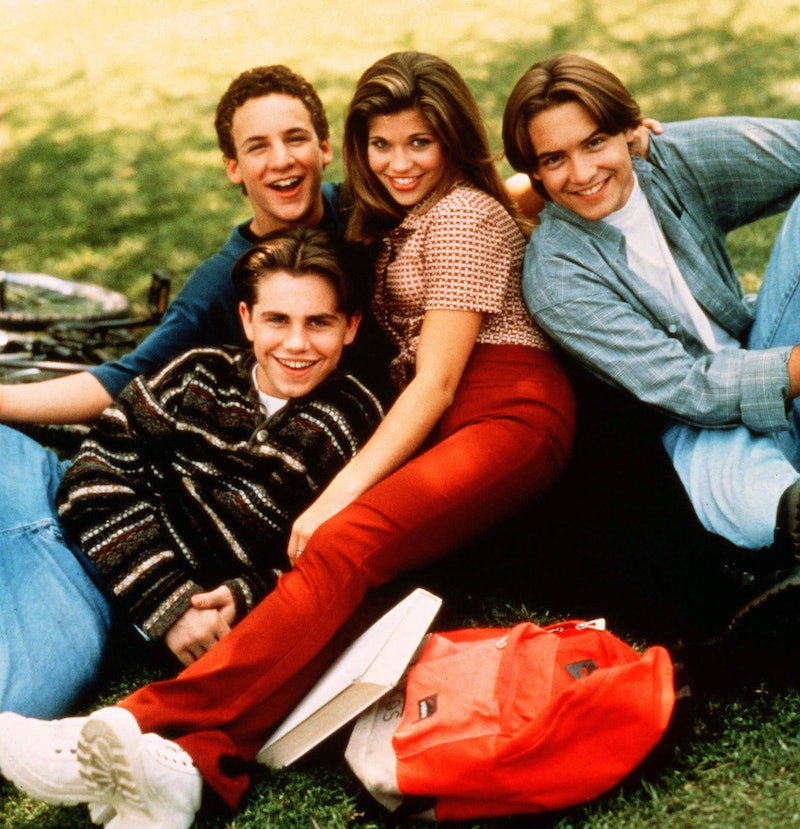 This '90s crew is back together again. Over the weekend, the Boy Meets World cast reunited during Fan Expo Boston, and the pictures will make fans so nostalgic. The main cast — including Ben Savage (Cory Matthews), Danielle Fishel (Topanga Lawrence), Rider Strong (Shawn Hunter), Will Friedle (Eric Matthews), and William Daniels (Mr. Feeny) — met up at the event and posed for photos that will make anyone who grew up watching the series want to marathon it ASAP.

On Saturday, Fishel posted the Boy Meets World cast photos on Instagram, which showed all the former costars posing together. In the first picture in the set, the castmates and longtime pals all have emojis over their faces. Fishel gave birth to her first son in June, as per People, and the emojis are a funny reference to her pictures of her baby on Instagram, in which she covers his face with emojis for privacy reasons. The star captioned the new photoset, "Don't @ me."

Of course, the post also included the original photo of the cast, who are gathered Daniels, who obviously played Mr. Feeny, the beloved teacher who lived next-door to the Matthews and often offered his best wisdom. In the picture without the emojis, all five of the former costars are sticking out their tongues and making silly faces.

Fishel wasn't the only star to post pictures from the reunion. Friedle also shared a goofy cast picture on Instagram, in which the the friends are gathered around Fishel. He captioned the picture, "Lesson learned: Never try to take Danielle's Chair."

The former castmates also appeared to hang out after the Boston event was over. On Sunday, Savage posted a photo of the Boy Meets World crew sight-seeing on Instagram, captioning the photo, "Boston tea party." Fishel commented, "I can smell this photo from here," while Friedle added in the comments, "Near Paul's house! (Revere that is...)"

Boy Meets World first aired in 1993 and wrapped in 2000 after seven seasons. A spinoff series called Girl Meets World aired from 2014 to 2017, following the life of Cory and Topanga's daughter Riley. It's been nearly two decades since the original series aired, but Fan Expo Boston was not the first time these actors reunited.

On Thursday, August 15, Fishel posted a picture of Savage meeting her son on Instagram, writing, "The original Boy came to meet our boy" with a heart emoji. Back in 2018, both Friedle and Savage attended Fishel's wedding, as per People. This isn't the only time the longtime friends have shown up to support each other — Savage attended Matthew Lawrence's engagement party in July 2018 as well.

In recent years, fans have also been able to look forward to several public reunions. In March, Boy Meets World stars appeared at Emerald City Comic Con in Seattle, where they also took throwback pictures with Daniels. The cast reunited at New York Comic Con for a panel on the 25th anniversary of the show in 2018 as well, according to EW.

It makes sense that after seven years working on Boy Meets World this cast is bonded for life. The reunion in Boston proves they remain close pals, and it'll make fans miss the show more than ever.