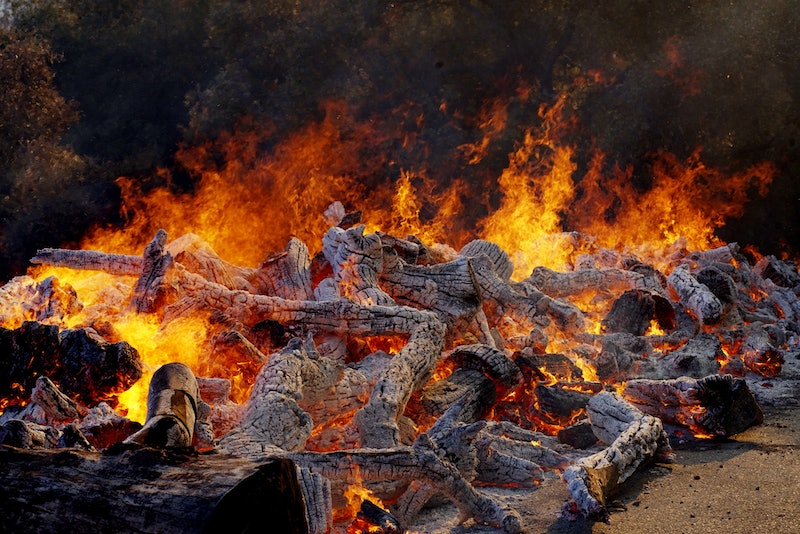 As President Donald Trump tours California to witness the devastation wrought by multiple wildfires, the fires themselves continue to spread in both the northern and southern parts of the state. According to Fortune, the Camp Fire in Northern California is now the deadliest in the state's history, having killed more than 70 people. Maps of the California wildfires reveal just how damaging the blazes have been — and how far they've spread.

According to CBS News, the Camp Fire has left more than 1,000 people unaccounted for, and at least 71 people have been killed. In Southern California, meanwhile, the Woolsey Fire has left at least three people dead, and is 82 percent contained. The Camp Fire is only 55 percent contained, per CBS News, and the two fires have collectively consumed almost 250,000 acres — an area larger than many U.S. cities.

These devastating fires have also had a significant impact on air quality, especially in Northern California. Smoke from the fires in the region has made the air some of the dirtiest in the world, The New York Times reported, with pollution levels exceeding those in many Chinese and Indian cities, and many San Francisco Bay Area residents have reportedly been lining up to buy face masks to help them breathe. As maps of the California wildfires indicate, the fires have been extremely destructive, and forced hundreds of thousands of people to evacuate across the state.

An interactive map designed by CAL FIRE shows that the Northern California town of Paradise and multiple nearby areas have been destroyed by the Camp Fire, meaning that 50 percent or more of the total number of structures in the area were damaged. According to the San Francisco Chronicle's 2018 California fire tracker, the Camp Fire has destroyed 12,263 structures, including 9,700 homes lost. In Southern California, the Woolsey Fire has destroyed 836 buildings and threatened roughly 57,000.

NBC News, meanwhile, has created a map that allows users to compare the size of the Camp, Woolsey, or Hill Fires to a number of different U.S. cities. The Hill Fire has been completely contained, but the Camp Fire, for example, is roughly the size of the city of Chicago, and 10 times the size of Manhattan.

Despite burning on opposite ends of the state, both the Camp and Woolsey Fires started on Nov. 8, just hours apart. Experts are still trying to determine the precise causes of each fire, and two electric companies are under close scrutiny, per The Guardian. According to The New York Times, the Camp Fire's rapid spread is somewhat easier to explain — a dry terrain coupled with strong winds helped move it along at a high speed.

CBS News reported that in a press release issued on Friday, the L.A. County Office of Emergency Management stated that serious infrastructural damage in certain communities will require them to be "completely rebuilt" before they can be repopulated. Although the Camp and Woolsey Fires have been partially contained, they have already caused considerable longterm damage, and regions affected by the wildfires will need time and assistance to recover.