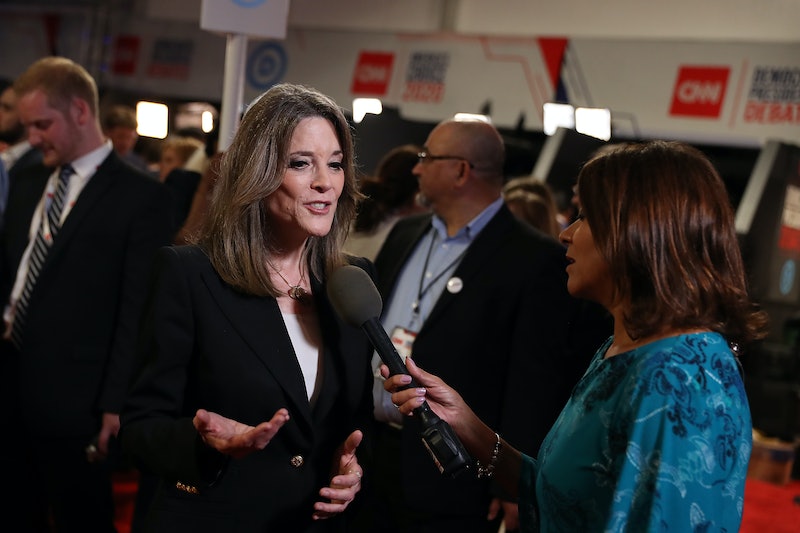 Self-help author Marianne Williamson had a big night at Tuesday's CNN Democratic debate. Williamson received huge applause from the crowd for her answer to a question on reparations and for saying that "wonkiness" wouldn't help Democrats beat President Donald Trump in 2020. Political pundits declared her one of the debate's winners, and she was the most searched-for candidates on Tuesday night, according to Oregon Live. But critics of hers were pointing to some older and more recent Marianne Williamson quotes on health to contextualize her sudden rise to prominence on the debate stage.

Williamson impressed debate watchers when she was asked about reparations as a form of "financial assistance" for those descended from enslaved people. "Well, first of all, it’s not $500 billion in financial assistance, it’s $200 to $500 billion payment of a debt that is owed. That is what reparations is," she said, adding the country doesn't need "another commission to look at evidence."

"We need to recognize, when it comes to the economic gap between blacks and whites in America, it does come from a great injustice that has never been dealt with," she said.

That and her other applause lines converted some Twitter users into big Marianne 2020 fans. But some political observers quickly pointed to Williamson's past comments on weight loss, mental health, illness and healing, and vaccines, ranging from decades-old excerpts from her books to interviews as recent as the week leading up to the debates, pointing out that the views they reveal shouldn't be lost amid all the analysis about her debate performance.

Most recently, Williamson told BuzzFeed News' AM to DM that antidepressants are overprescribed by doctors and aren't usually necessary to treat "normal human despair."

Williamson, who does not have a medical degree, has also tweeted about treating mental illness with antidepressants a number of times. After actor Robin Williams died by suicide in 2014, she tweeted an article with a headline that said he was on antidepressants and wrote, "The truth about anti-depressants: Helpful for some, but harmful for others..."

In June 2018, Williamson also wrote on Twitter, "The answer to depression is more scientific research only if you think of it simply in biomedical terms. The medicalization of depression is a creation of the medical industry. For millennia, depression was seen as a spiritual disease, and for many of us it still is."

BuzzFeed News reported that Williamson also appeared to agree with a tweet that claimed antidepressants are "one of the prime causes of mass shootings as well." Williamson responded to the tweet with "Absolutely. Las Vegas shooter and more..."

When AM to DM asked Williamson if it were productive for her to weigh in on antidepressants, she said she didn't see anything wrong with giving her take on the subject.

"I very much stay in my lane," she said. "I would say when doctors are coming in to talk about situational despair, that they’re getting in my lane. I’ve never weighed in on issues like bipolar, schizophrenia, anything like that. That’s not my lane, I’ve never weighed in, and clearly there are medical conditions for which psychotherapeutic drugs have been and continue to be very helpful in people’s lives, and I think that’s true with clinical depression as well."

Some have argued that views like Williamson's contribute to the stigma surrounding antidepressants and other medications used to treat mental illness, while other Twitter users called her out by talking about how antidepressants have helped save their lives or significantly improved their quality of life.

Some of her detractors have also pointed to Williamson's 2010 book A Course in Weight Loss: Spiritual Lessons for Surrendering Your Weight, which contains a number of claims and ideas that aren't supported by science, according to INSIDER. Some of those claims are:

Earlier this month, in a tweet that appeared to address several reports about her past statements and writings, Williamson wrote that she is "pro-science & medicine" and has "never blamed a victim nor fat-shamed anyone."

On Illness And Healing

Williamson also wrote a book called A Return to Love: Reflections on the Principles of "A Course in Miracles," which is her response to the 1976 book by Helen Schucman. In A Return to Love, Williamson appears to suggest that cancer or AIDS are partially the result of negative thoughts. For example, she wrote, "Cancer and AIDS and other serious illnesses are physical manifestations of a psychic scream, and their message is not 'Hate me, but 'Love me.'"

"When a clergyperson, a faith leader, prays with someone, or leads them in a guided meditation—this is not in repudiation of medicine," she told Vanity Fair, adding that, "in today’s world, the oncologist is liable to be the first person to suggest that you get yourself over to one of those spiritual support groups, because serious spiritual practice has been proven to boost the functioning of the immune system. And by the way, when I was working with AIDS patients, a lot of that was at a time when there was no medicine yet."

At a New Hampshire campaign event in June, Williamson called mandatory vaccinations "Orwellian" and "too draconian," according to NBC reporter Julia Jester. “To me, it’s no different than the abortion debate," Williamson said. "The U.S. government doesn't tell any citizen, in my book, what they have to do with their body or their child.”

Criticism of those comments led Williamson to issue an apology via Twitter, in which she said she misspoke and understands both that vaccines save lives and that some people are skeptical of "Big Pharma." When Vanity Fair recently asked Williamson whether her comments indicated that she didn't "trust mainstream science on vaccines," the candidate said that people should trust mainstream science before pointing to the pharmaceutical industry's role in the opioid crisis.

"What is it in us that would see that, but then in every other area of their function, just assume that Big Pharma is a paragon of pure intention and concern for the common good?" Williamson told the magazine.

Not everyone is buying Williamson's explanations for these past statements, which Noah Berlatsky described at NBC News THINK as "the natural outgrowth of an individualistic, reactionary ideology which calls first for internal spiritual renewal rather than for systemic cultural and political change." Members of the communities directly impacted by those views, including the disability community, continue to see them as dangerous, regardless of how Williamson performed in Tuesday night's debate.