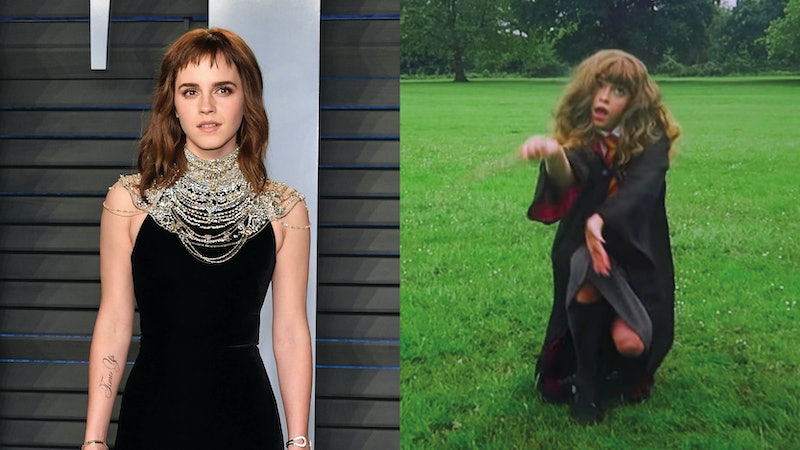 Hermione Granger was best known for her superior magic skills, but I'm sure she enjoyed throwing a few shapes when she got the chance. Sadly, nights out are pretty few and far between when you're working to bring down "he who must not be named", and we're pretty sure the Yule Ball was a death-drop free zone. So fans of the Harry Potter books and films were never given an idea of what a dancing Hermione would have looked like beyond the odd swish and flick, of course. (I'm going to go ahead and pretend that ultra-awkward tent dance scene in Harry Potter and The Deathly Hallows - Part 1 never happened, because it was possibly the most cringeworthy thing I've ever seen.)

Now, thanks to viral sensation Dancing Hermione, we've got an idea of how the brightest witch of her age might have busted a move if she'd had the chance. YouTuber Kelsey Ellison wasn't intending on setting social media alight when her friend posted a video of her dancing to a Super Mario Brothers remix at London Comic Con in full Hermione get-up, complete with wig and wand, but that's exactly what happened.

The clip has over 90,000 likes, has been watched around 8 million times and counting, is a fully-fledged meme and has inspired countless fan artworks. But its star has revealed there's only one person she really wants to see it — Emma Watson, who played the witch in the Harry Potter films. "I don't think she has seen it - yet," Ellison told BBC Newsbeat. "But hopefully maybe one day she will."

The clip's staggering popularity encouraged the social media star to record a follow-up complete with death drop that has attracted 1.1 million views. Watch out for the hilarious outtake where Ellison loses her Hermione wig mid-dance move. Definitely the kind of social media sensation I can get on board with. "The style I was doing there, I just taught myself from YouTube videos," she said. "It was just me having fun, but I guess some of the inspiration was from Vogue Femme. A lot of people were saying: 'Where's the death drop?' which is one of the big dance moves in Vogue Femme, so I just gave them what they wanted."

Ellison's self-taught moves are derived from the dance style known as voguing, a hybrid of poses from ancient Egyptian hieroglyphs and Vogue magazine, which was created by drag queens in Harlem in the 1960s and popularised in '90s documentary Paris Is Burning and Madonna song "Vogue".

The 25-year-old is pretty much the Harry Potter franchise's biggest fan, but told Newsbeat that, surprisingly given the success of her performance, she doesn't have any plans to continue doing Dancing Hermione videos. She'll still be continuing her usual YouTube content, which she's been working on since she was 17.

"I'm a really big fan [of the series], stupidly big. I just love that [Hermione] always stays true to herself, she doesn't care what other people think about her being smart, her opinions or anything. She was a massive role model for me when I was younger, I always wanted to be Hermione," she commented.

Hmm, I'm sure if J.K. Rowling revealed plans for a Harry Potter musical (a natural next step after a play and a theme park, surely?) that Ellison could be persuaded to put back on her Hogwarts uniform and dancing shoes, or failing that, a RuPaul's Drag Race Harry Potter special? The crossover possibilities are endless. At the very least, I hope the talented YouTuber gets a video response from Watson. Hermione dance-off anyone? Now there's a viral video I'd pay to see.